Two reasons why Italians are turning sour on the euro

LONDON (Reuters) - The euro zone’s greatest existential threat may no longer center on small, peripheral countries such as Greece and Portugal dragging it down, but instead on the prospect that its third largest economy, Italy, could abandon ship.

Two recent economic reports show what the euro has meant to Italians and why polls suggest they are no longer keen. One suggests they are poorer as a result of being part of the currency bloc, the other that they are falling further behind their counterparts in main trading partner Germany.

It is a distant risk to the currency bloc that Italy will actually walk away, but not beyond imagination.

Italy’s 5-Star movement, which wants to dump the euro through a referendum, has been surging in opinion polls recently, getting as much as a third of the vote in a March Corriere Della Sera poll. The anti-European Union Northern League got another 12 or so percent - and there are others.

But actually leaving the euro zone would come down to whether Italian voters believe 15 years or so of the currency had been good or bad for them.

The recent analyses suggest it has been the latter. Consider, first, how much Italians have to spend.

A December report from Eurostat, the European Union’s statistics agency, looked at GDP per capita - the economy divided by its people - in terms of purchasing power between 2004 and 2015.

That puts Italy closer to emerging economies like the Czech Republic, Slovakia and Slovenia that it does to Germany. France was pretty much unchanged at 106.

This means that simply in terms of what they can buy, Italians are poorer that they were in 2004, a few years after they swapped the lira. 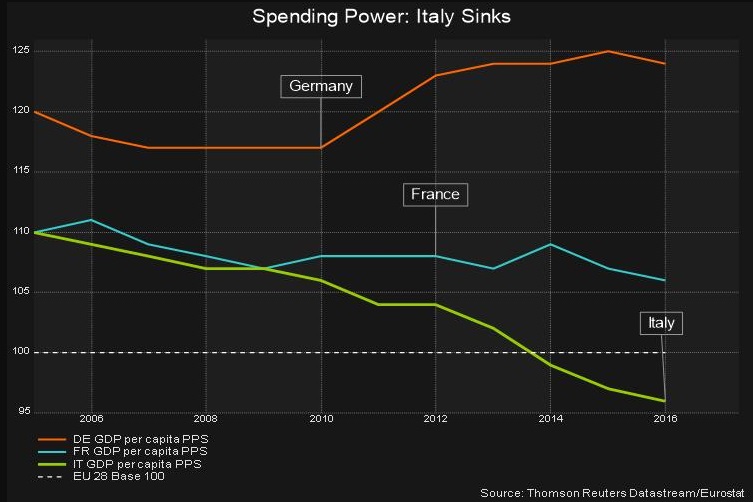 YOUR EURO, MY EURO

Second are some findings this month from research group World Economics that suggest Italy’s problems from its currency linkage with Germany are increasing.

Germany has become much more competitive as a member of the euro zone. By comparison, Italy has not.

World Economics takes a basket of representative goods and services in U.S. dollars and compares it in purchasing power terms with the cost in other currencies. The result is its World Price Index (WPI).

For the euro zone, the index allows for counter-intuitive comparisons between member countries - essentially creating German euros, French euros, Italian euros and so on.

Over the past two years, the “Italian euro” has gone from being 3 percent overvalued to 4 percent undervalued in the WPI, effectively a better position vis-à-vis the dollar.

But the difference between it and the “German euro” has widened by two percentage points as the latter has become 14 percent undervalued.

World Economics points to other euro zone countries that have a worse problem -- France and Greece, for example - but suggests that Italy is a new fault line for the euro zone.

“Italy looks like becoming the next ‘domino’ to suffer from the strength of the German economy as trends ... have become much more pronounced over the past 12 months,” it said in a note. 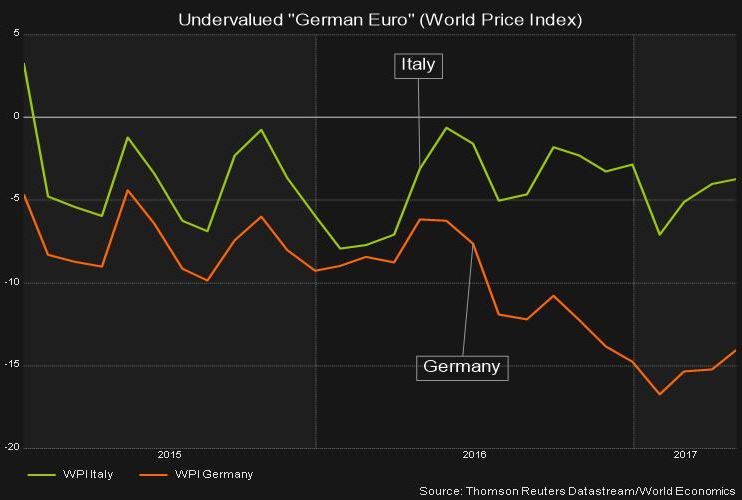 None of this may be caused by the euro per se, or be enough to outweigh the benefits of pooling a currency and the protection that can bring.

But added to other factors - annual GDP growth struggling to reach 1 percent, for example, or declining capital investment in business and infrastructure - they do go some way towards explaining why fewer Italians tell pollsters the euro is a good thing.