LUCKNOW, India (Reuters) - Prime Minister Narendra Modi has promised to clean up politics. The man running the ruling party’s campaign in a crucial state election, who is facing 11 criminal cases, says it will take a while.

“At a time of elections, one has to forget every other aspect and just focus on victory,” said Keshav Prasad Maurya, as his three-vehicle convoy carrying police with automatic rifles sped through the countryside.

Polls open on Saturday in Uttar Pradesh, with a population of some 220 million, and on the ground Modi’s loftier aims for a new India seem far away.

Maurya, the state’s president for the ruling Bharatiya Janata Party (BJP), says the charges against him are false and politically motivated; unless he is convicted, they do not prevent him from holding office.

His bosses are not concerned.

An official at the prime minister’s office referred questions about Maurya and his criminal cases to the BJP, where an aide to party president and Modi confidant Amit Shah said there was no problem.

The charges are related to Maurya protesting on behalf of Hindu causes, said the aide, and anyone who does so “is not a criminal in the party’s eyes.”

“Slowly,” Maurya told Reuters, “the BJP will be moving towards a direction where it will only have politicians who are absolutely clean and have no cases of corruption against them.” 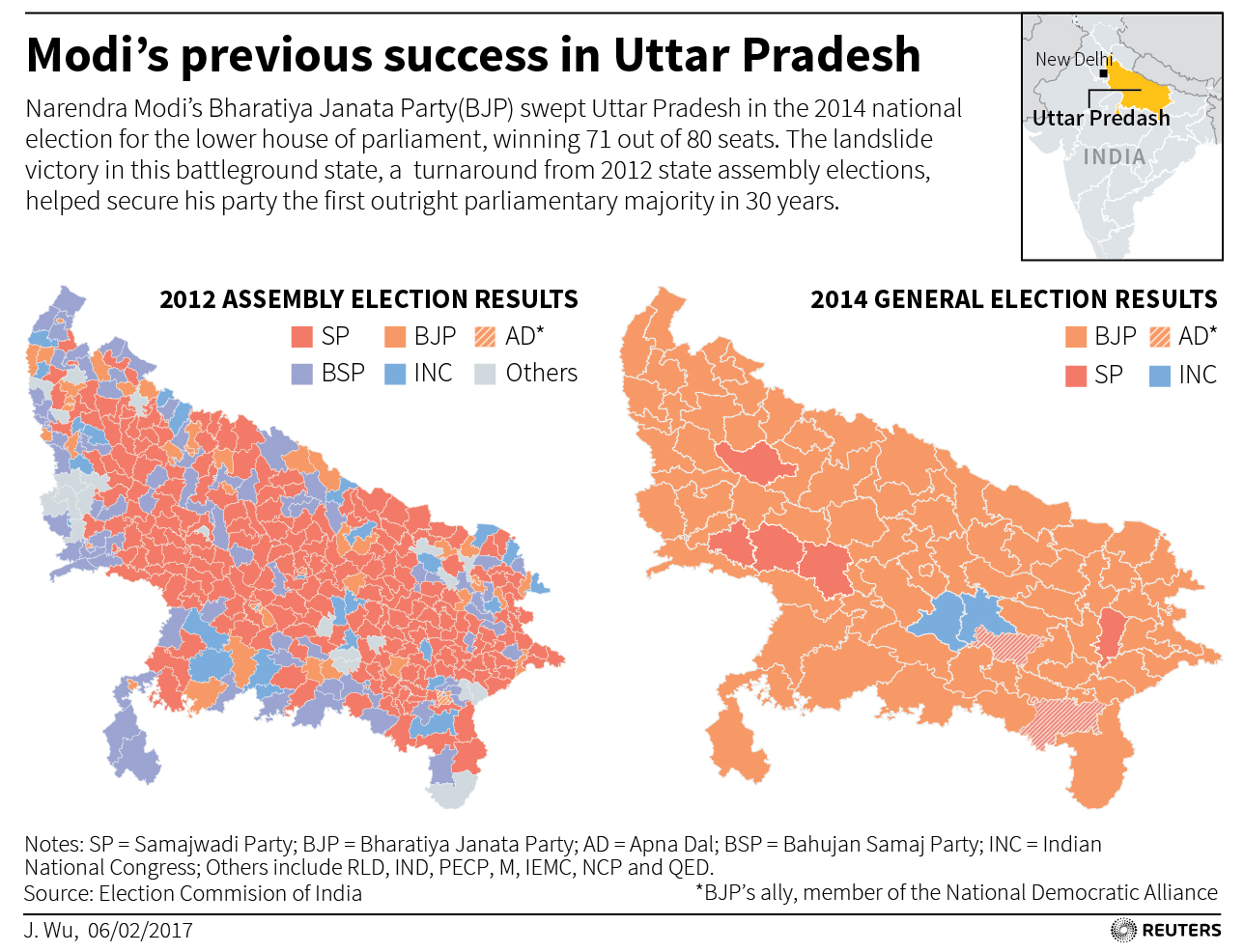 Modi stormed to power in 2014 vowing to sweep away corruption and vested interests from business and politics.

Late last year, he abruptly abolished 86 percent of cash in circulation, in a bid to crush the shadow economy, force Indians to declare their wealth and empower the poor.

Ahead of the world’s biggest scheduled election this year in Uttar Pradesh, though, the BJP is sticking to an old formula: an elite with rap sheets and swelling bank accounts who pit religious communities and caste against each other.

The party’s manifesto for the state poll, for example, mixed development with a set of right wing Hindu causes likely to upset the sizeable Muslim population.

WIN AT ALL COSTS? 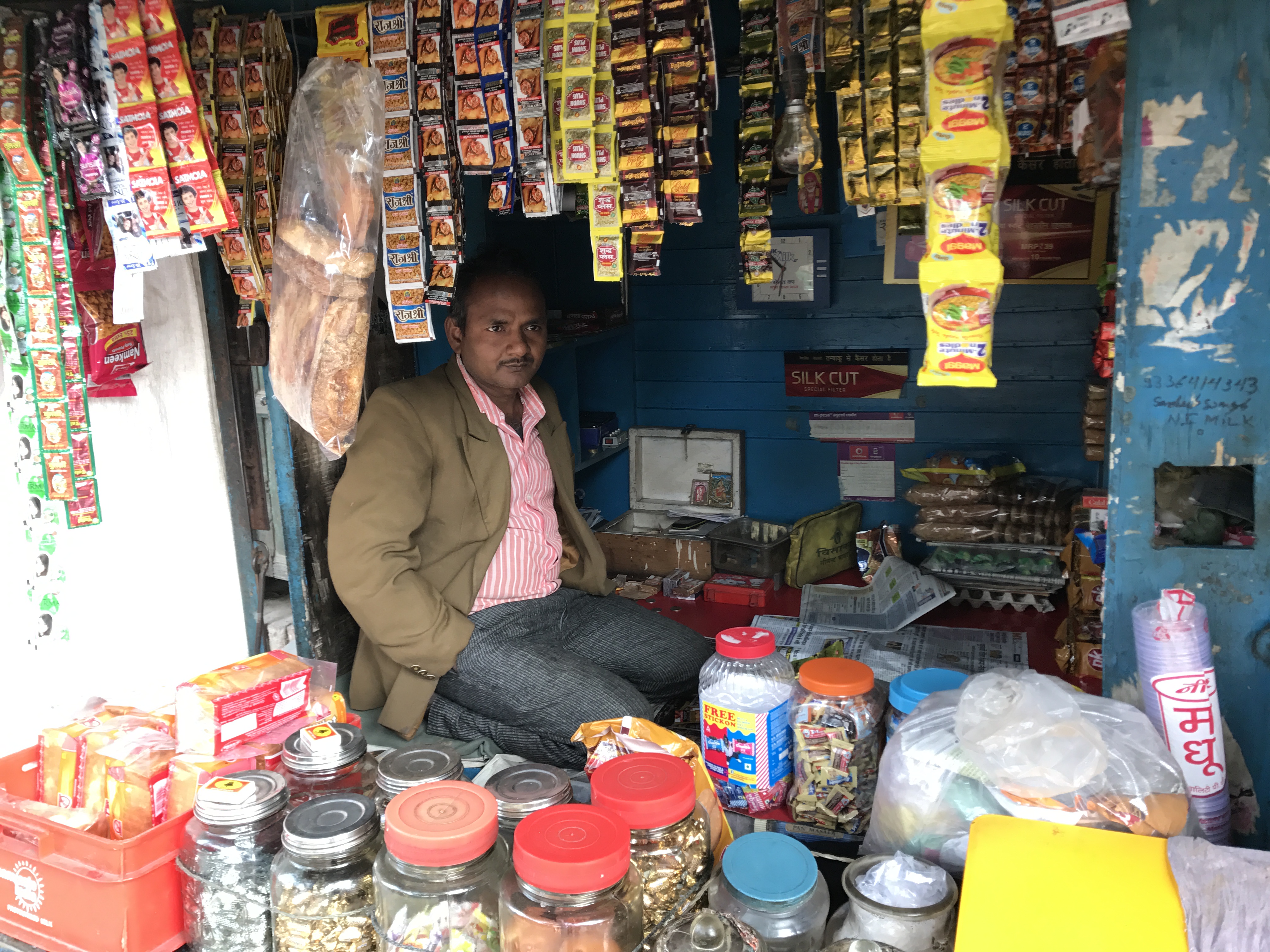 As Maurya criss-crossed Uttar Pradesh by helicopter and sport utility vehicle ahead of a month-long election, voters were doubtful of wholesale reform to the way Indian politics work.

“That’s not going to change – the corrupt and the criminal are able to get votes,” said Rakesh Kumar Gupta, as he sold bread, cigarettes and snacks from the same cramped stand his father tended before him in Uttar Pradesh’s capital, Lucknow.

Ashutosh Mishra, head of the political science department at the University of Lucknow, said he saw no sign that Modi or any other major Indian politician was serious about overhauling a system he described as “feudal.”

“Why should they? They are enjoying the perks of power, they are living the lives of modern gods,” Mishra said.

The biggest of five state polls held in India this spring points to a central dilemma for Modi.

If he loses the poll in Uttar Pradesh, he risks dissent in the ranks of his support base and a weaker position for his bid for re-election in 2019.

But analysts say that if Modi wins through divisive politics driven by men with controversial backgrounds, it undermines his populist narrative of a rising India.

Also at stake in Uttar Pradesh is the number of seats Modi controls in the Rajya Sabha, where the opposition has managed to delay some economic reforms. 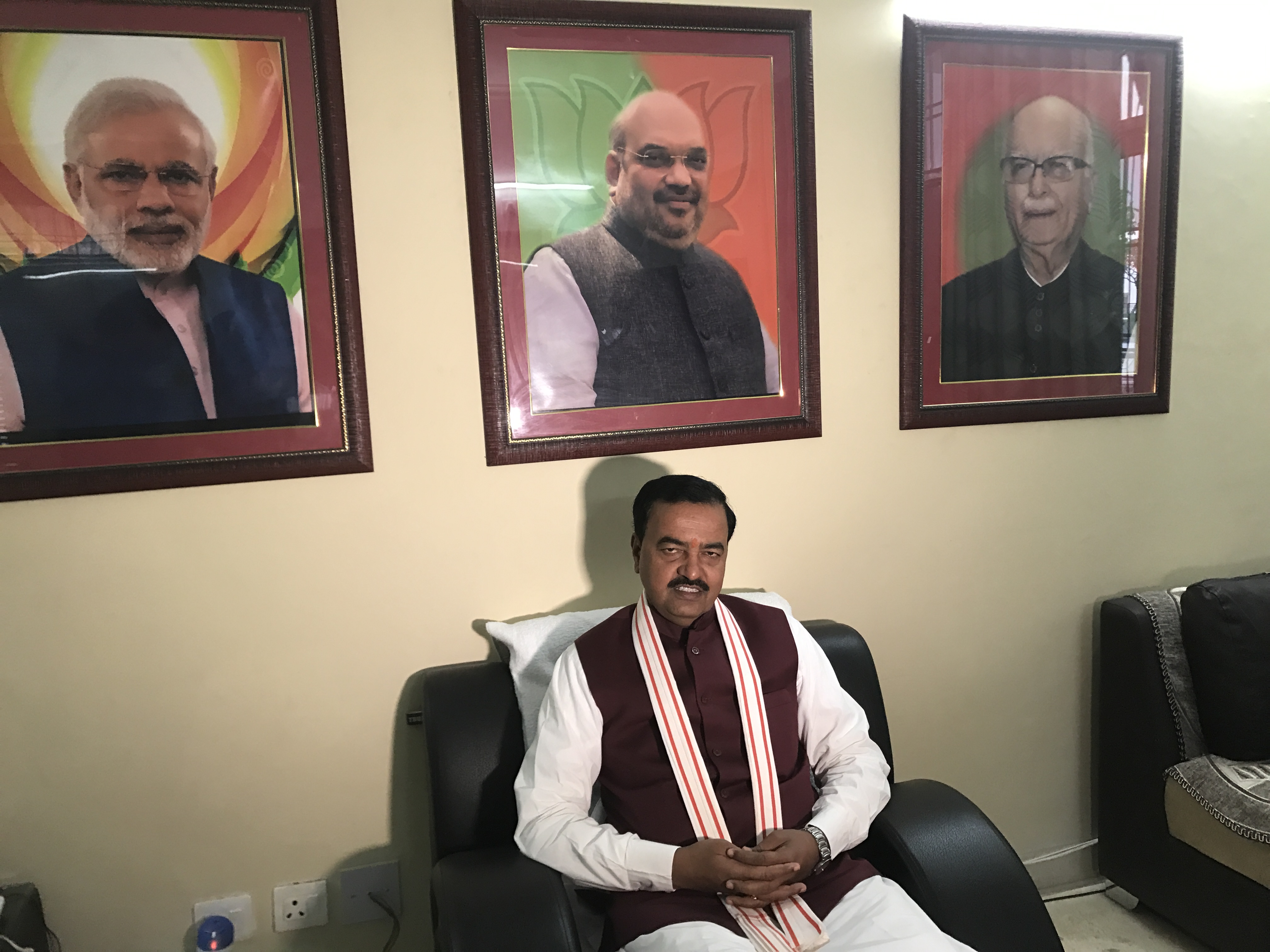 Maurya’s career bears a resemblance to that of the prime minister.

Both are from poor families and as young men helped their fathers sell cups of tea. Each rose to prominence through the ranks of the Rashtriya Swayamsevak Sangh, a powerful Hindu nationalist umbrella group that helped create the ruling party.

Unlike Modi, though, Maurya’s criminal docket and wallet have expanded in recent years.

In 2007, when he ran for office in the state legislature in Uttar Pradesh, he had four criminal cases pending and some 13.6 million rupees (about $200,000 at current rates) in assets, according to his election filings.

In 2014, as he campaigned successfully for a seat in the Lok Sabha, Maurya faced 11 cases and declared 93.2 million rupees in assets.

Maurya blamed rival politicians for the criminal cases lodged against him.

Asked how his declared assets rose so rapidly - nearly sevenfold in seven years to more than $1.3 million, in a state where average annual per capita earnings are less than $750 - he replied: “My assets are very small, I don’t have too much.”

The combination of wealth and criminal charges have a close correlation with election success in India, data show.

During the last Uttar Pradesh state polls, in 2012, those with criminal cases made up some 20 percent of candidates but almost 50 percent of winners, according to the Association for Democratic Reforms, a Delhi-based advocacy group that examines candidate disclosure forms.

The margin was even wider for those with declared assets of at least 10 million rupees (about $150,000) – 20 percent of candidates and 67 percent of winners.

The figures partly reflect wealthy candidates’ ability to spend on campaigns, although the gap between their earnings and that of ordinary voters in India is eyecatching.

Keshav Prasad Maurya at the state headquarters of the BJP in Lucknow.

The BJP is not the only party with an imperfect image in the forthcoming poll.

Juhie Singh, spokeswoman for the Samajwadi Party, a main competitor to the BJP, said her party sought to winnow people from its candidate list who had been named in criminal cases.

“But ultimately the win-ability criteria does take over these things,” Singh said. “It’s still not such a mature democracy where we can completely discount it.”

Singh herself is a defendant in a public corruption case that relates mainly to her father.

“I’m just a lateral entry into the whole case,” she said.

Meanwhile, haggling for seats at the political high table goes on unchecked, in scenes that have played out for decades in India’s rough-and-tumble elections.

Pulling up to the state headquarters of the BJP in Lucknow on a recent morning, Maurya was greeted by a crowd of angry party supporters demanding to know why their candidates had not been given a slot to run for the state legislature.

Police pushed them aside to make way for Maurya’s gleaming white SUV and clanged the gates shut. After Maurya walked into the building, a guard slammed the front door closed and slapped a lock on it.

“Let them in two at a time, no more than that,” Maurya told an aide as he settled behind his desk, flanked by police.

Outside, amid the cries of insults and threats directed at Maurya, a man shouted, “You are a dictator! This is our party too! Let us in!”

Maurya met three sets of protesters before saying he had other business he needed to attend to.

With that, Maurya, who like Modi speaks passionately about bringing a different brand of politics to the people, retired with a group of BJP leaders to an inner courtyard. A metal fence closed behind them. 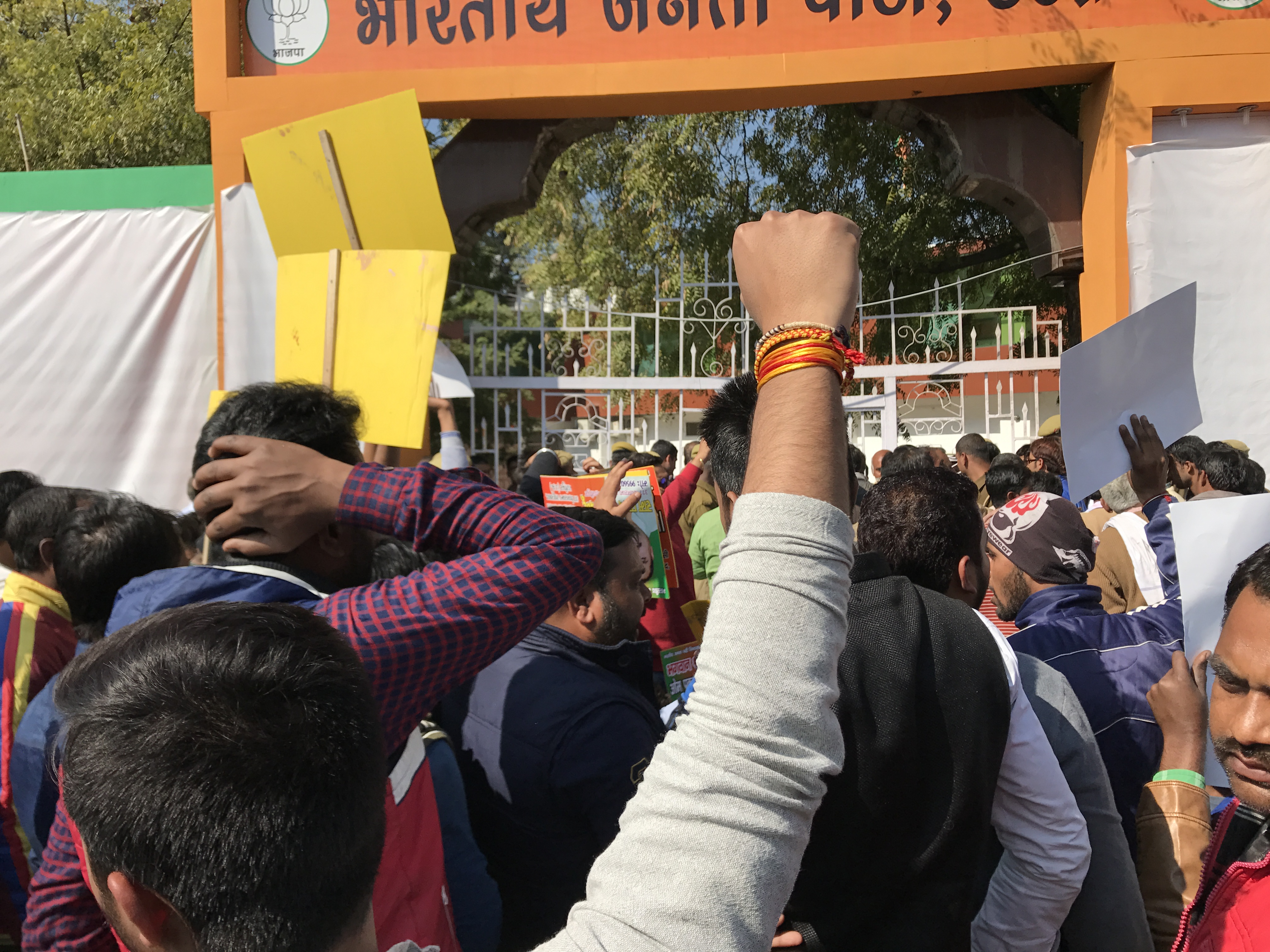 BJP supporters protesting outside the party headquarters in Lucknow.

GRAPHIC: Rise to power of the rich and infamous - click