Prime Minister Narendra Modi’s government has since 2014 tightened surveillance of non-profit groups, saying they were acting against India’s national interests. Thousands of foreign-funded charities’ licences have been cancelled for misreporting donations.

Critics, however, say the government has used the foreign funding law as a tool to silence non-profit groups which have raised concerns about the social costs of India’s rapid economic development.

The intelligence wing of India’s home ministry last year drafted a note on Bloomberg Philanthropies, raising concerns that the foundation was running a campaign to “target” Indian tobacco businesses and “aggressively” lobby against the sector.

Though the three-page note, reviewed by Reuters, said the Bloomberg initiative’s “claimed intention to free India of tobacco cannot be faulted” given the known risks from tobacco, it highlighted the sector’s importance, noting it brings in nearly $5 billion in annual revenue for governments, and provides a livelihood for millions of people.

“Foreign interests making foreign contributions ... for purposes of lobbying against an established economic activity raises multiple concerns,” the note said, including, it said, an “adverse economic impact” on 35 million people.

The June 3, 2016 note, marked “SECRET” and circulated to top government officials, including in Modi’s office, has not previously been reported. The probe continued until at least April this year, another government document showed.

Rebecca Carriero, a spokeswoman for Michael Bloomberg and New York-based Bloomberg Philanthropies, declined to comment as they were unaware of any investigation.

A home ministry spokesman said “queries which relate to security agencies cannot be answered.” Modi’s office did not respond to an email seeking comment.

The ministry’s note was one of the factors behind the rejection of a foreign funding licence renewal of at least one Bloomberg-funded India charity last October, said a senior government official aware of the investigation.

Michael Bloomberg, one of the world’s richest people and a former New York City Mayor, has committed nearly $1 billion to support global tobacco control efforts. One of his focus countries is India, where tobacco kills 900,000 people a year.

Other than funding Indian NGOs, Bloomberg’s charity has in the past worked on improving road safety and supported federal tobacco-control efforts. In 2015, Modi called Michael Bloomberg a “friend”, and the two agreed on working together on India’s ambitious plan to build so-called smart cities.

The home ministry note said the Bloomberg charity successfully lobbied for the introduction of bigger health warnings on cigarette packs, “contrary” to the recommendations of a parliamentary panel.

While the panel called for the size of warnings to be more than doubled to 50 percent of a pack’s surface area, the health ministry sought a higher figure of 85 percent. Despite protests from India’s $10 billion cigarette industry, the Supreme Court last year ordered manufacturers to follow the more stringent health ministry rules.

That, the note said, was the first of the three-phase Bloomberg campaign targeting India’s tobacco industry. It did not explain how exactly the Bloomberg charity lobbied.

While the note mirrored some of India’s tobacco lobby’s positions - such as how anti-smoking policies could adversely impact farmers - the government official said the investigation was not done at the behest of the industry.

A health ministry official, however, said: “We don’t see tobacco as an economic activity.” He added that the health ministry was unaware of the home ministry’s note on Bloomberg Philanthropies.

India has stepped up scrutiny of NGOs registered under the Foreign Contribution Regulation Act (FCRA).

In 2015, the home ministry put the Ford Foundation on a watch list and suspended Greenpeace India’s FCRA licence, drawing criticism from the United States.

Earlier this year, the government banned foreign funding for the Public Health Foundation of India, a group backed by the Bill & Melinda Gates Foundation, saying it used foreign donations to "lobby" for tobacco-control policy issues, "which is prohibited under FCRA."

In the Bloomberg case, the home ministry note included a chart showing how funds flowed from Bloomberg Philanthropies to its partner, the Campaign for Tobacco-Free Kids, which was then funding five local FCRA-registered NGOs. These NGOs, the note said, were being used by the Bloomberg charity for “anti-tobacco lobbying activities.”

The FCRA licence of at least one of them - the Institute of Public Health (IPH) Bengaluru - was not renewed in October, in part due to the home ministry’s note, the government official said.

The IPH said it was told by the home ministry that its licence was not being renewed on the basis of a “field agency report”, but no details were given. It was unaware of the investigation on Bloomberg Philanthropies.

In April, the home ministry wrote to the health ministry, citing an “inquiry into foreign funding” for lobbying to change laws in India. The letter, seen by Reuters, mentioned the Bloomberg initiative and directed the health ministry to report on anti-tobacco lobbying by foreign donors in other countries where tobacco is widely used.

(Reporting by Aditya Kalra in NEW DELHI, with additional reporting by Duff Wilson in NEW YORK; Editing by Sanjeev Miglani and Ian Geoghegan) 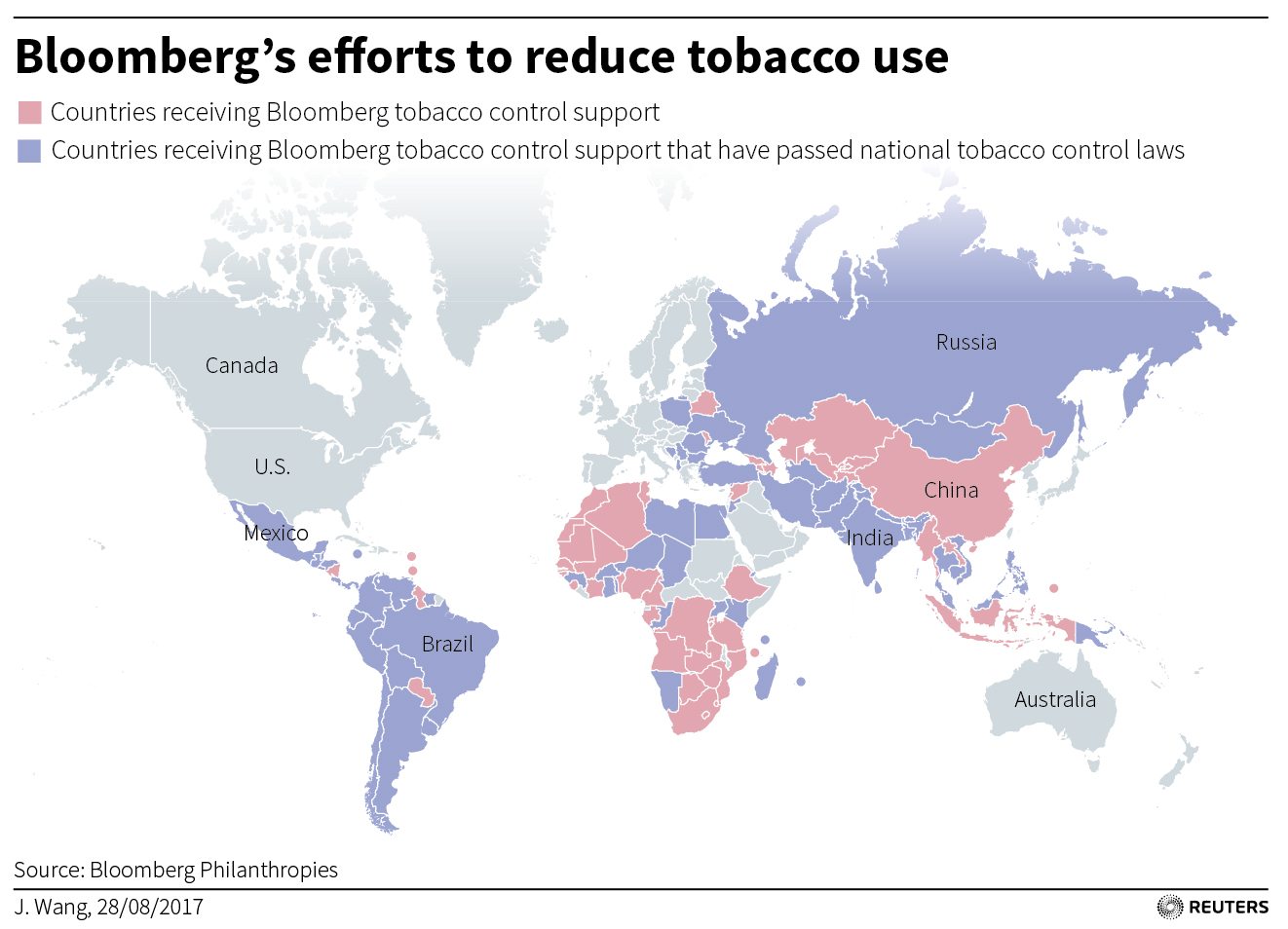