SINGAPORE (Reuters) - Investors are increasingly excited about the prospects for much faster growth in the solar power industry in Southeast Asia, which has until now been a backwater for renewable energy.

They say that the region is in a perfect position to benefit from rapidly declining prices in solar panels. It has strong economic growth, relatively high costs of electricity and a shortage from traditional sources, undeveloped infrastructure in more remote areas, plenty of sunshine, and backing for more renewable energy from many of Southeast Asia’s governments.

“Dramatically falling costs for solar energy technologies means businesses and governments are choosing renewable energy not for environmental reasons but for economic ones,” said Roberto De Vido, spokesman for Singapore-based Equis, one of Asia’s biggest green energy-focused investment firms with $2.7 billion in committed capital. “It simply makes good business sense. And that’s a trend that’s not going to change,”

By the end of last year, Southeast Asia had installed solar capacity of only just over 3 gigawatts (GW), a mere 1 percent of global capacity, according to data from the International Renewable Energy Agency (Irena).

Steve O’Neil, the chief executive of Singapore-based solar panel maker REC, said he expects that to grow by 5 GW of new installations every year between 2017-2020. That’s the equivalent of building five standard fossil-fuel power stations annually.

“People don’t realize what is about to happen, when you’re in the middle of exponential growth,” said REC’s O’Neil. “It’s transformational. 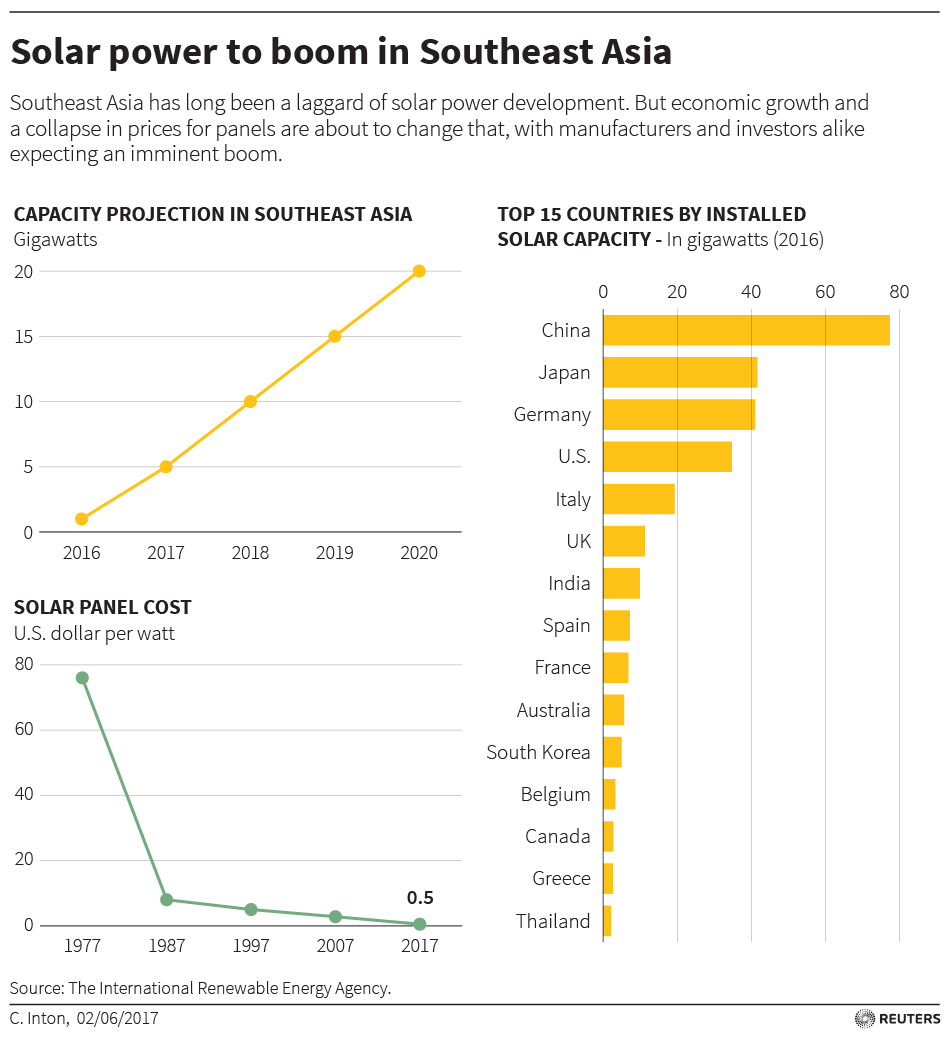 Some European funds are among those looking at the region.

“The projects on offer in Europe are stagnating, so European investors are looking in that direction with great interest,” said Armin Sandhoevel, chief investment officer for Infrastructure Equity at Allianz Global Investors, whose team manages 1.6 billion euros ($1.76 billion) worth of renewable investments.

Southeast Asia has a population of more than 600 million and annual power demand growth of 6 percent, which most countries struggle to meet.

Solar power potential is measured by Global Horizontal Irradiation (GHI), a measurement of the intensity of the sun. Thailand has a GHI that can produce 1,600 to 2,000 kilowatt-hours of solar power per square meter (kWh/m2), well above the 1,000 to 1,200 kWh/m2 in Europe’s solar leader Germany, according to solar weather and data provider Solargis.

The region is ripe for a boom because solar panel prices have crashed to under 50 cents per watt of electricity today from $70 per watt in 1980 as technology and manufacturing efficiency have improved consistently.

At the same time, Southeast Asian countries have all set ambitious renewable energy targets, ranging from 18 percent of overall energy generation mix in Thailand and Malaysia to 35 percent in the Philippines, up from negligible levels today. 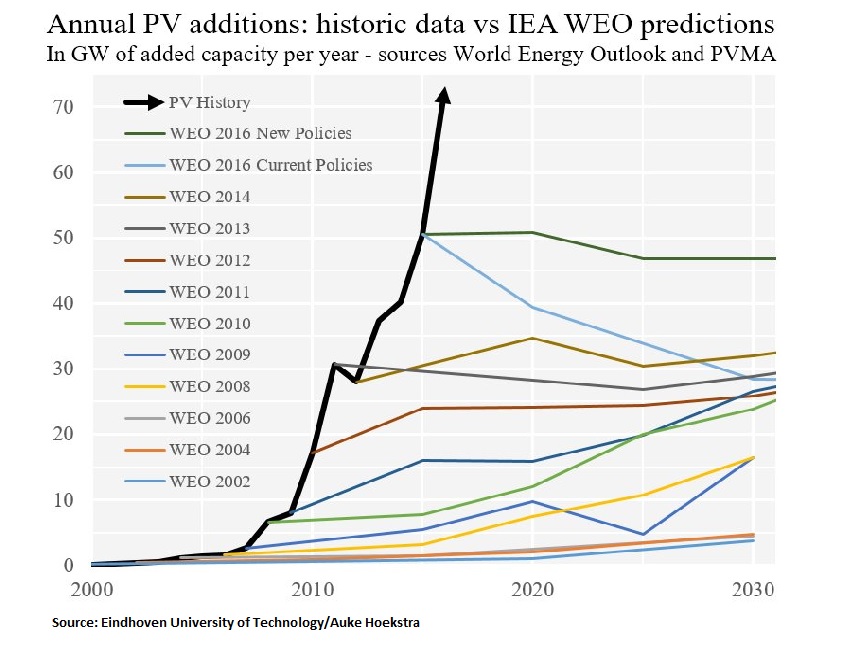 There are, of course, still risks for investors - including currency volatility, the difficulties of making land acquisitions, and usually the lack of any government guarantees, said Sharad Somani, head of Asia/Pacific Power & Utilities at KPMG.

Storing solar power through the night remains a hurdle too, though battery technology is improving rapidly.

Bringing together international investors, panel makers, and potential users is a small but growing group of venture capital firms, mostly based in Singapore.

GA Power is one such firm. Led by German solar business veterans, it focuses entirely on financing and developing solar projects across Southeast Asia.

“There is more money than there are projects. If you can offer professional developed projects, you’ll have no issue organizing funding,” said Roland Quast, GA Power’s managing director, adding that “a solar boom in Southeast Asia is unavoidable” given it is now a competitive power source.

He said an investor can expect around a 12 percent economic internal rate of return on average in the region. The measurement reflects returns after costs for the construction, installation, and operation of a project.

Mid-sized solar projects that can be turned on without having to tap into a larger grid are in favor in the region as governments seek to bring power to an area without having to add expensive infrastructure, Quast said.

KPMG’s Somani, who is an adviser in the renewables sector, said that Equis and other funds are raising capital with U.S. and European institutional investors, including pension funds. Equis declined to provide detail on the sources of its money.

“Today we have unique confluence of all three factors necessary for success of such projects – demand for projects from government/utility side supported by conducive regulatory framework, strong developer and supplier interest and abundance of domestic and international financing availability,” Somani said.

At the REC solar panel factory in Singapore, one of Singapore’s biggest manufacturing sites, a thousand workers and more than a hundred robots work around the clock, churning out 20 containers full of panels every day, which are immediately sent to overseas customers, increasingly to Southeast Asia.

Founded in Norway, headquartered in Singapore, and owned by Chinese industrial giant ChemChina, O’Neil says that REC sells globally, but that he expects “Southeast Asia to become a game-changer.”

In 2016, REC grew by just 3 percent in Southeast Asia - excluding the huge solar markets of India, China and Australia. This year, it expects 5 percent growth in the region, and then 9 to 10 percent growth annually between 2018 and 2020.

The business is cut-throat. Cheap Chinese production of solar panels has left a trail of collapsed companies in its wake - the bankruptcies of Germany’s SolarWorld, once Europe’s biggest panel maker, and major U.S. panel maker Suniva are among them.

To survive, REC says it needs to be in a relentless drive to improve productivity, including employing low-wage Malaysian workers and automating as much as possible.

“Our panels are now cheaper than a same-sized window,” said O’Neil.

Additional reporting by Chayut Setboonsarng in BANGKOK and Gavin Maguire in SINGAPORE; Editing by Martin Howell