BEIJING/SINGAPORE/LONDON (Reuters) - Some of China’s top oil refineries are having to take the highly unusual step of cutting operations during what is typically the peak demand summer season when hot weather drives up power usage and families take to the road during school holidays.

FILE PHOTO: Smoke rises from chimneys and cooling towers of a refinery in Ningbo, Zhejiang province August 19, 2014. REUTERS/China Daily/File Photo CHINA OUT. NO COMMERCIAL OR EDITORIAL SALES IN CHINA

Almost 10 percent of China’s refining capacity is set to be shut down during the third quarter, signaling that demand growth from the world’s top crude importer is stuttering further.

West African and European suppliers are already feeling the chill from China’s reduced demand, and a global glut has dragged spot prices for crude this week to their lowest since November, 2016.

Major Chinese oil refineries, including PetroChina’s Jinzhou will set their run rates around 6,500 barrels per day (bpd) lower than the second quarter, sources at the affected refineries said.

Petrochina’s Fushun refinery, with an annual capacity of 233,200 bpd, began a 45-day full shutdown at the start of June, the sources said on condition of anonymity as they are not authorized to speak to media.

Rival Sinopec is considering slashing as much as 230,000 bpd, equivalent to about 5 percent of its average daily production last year, in what would be only the second time in 16 years that the firm has cut runs.

Stocks of surplus products like gasoline and diesel have been building since mid-2015, when Beijing started giving out crude import licenses to independent refiners, sometimes called teapots. This has forced state-owned Sinopec and PetroChina to cut back operations, and reduced their crude buying.

“Refiners probably realized that the domestic market cannot take so much gasoline and diesel, and the only way is to cut runs,” said Gao Jian, crude oil analyst with China Sublime Information Group.

Adding to these cuts, around 1.3 million bpd of refining capacity is going to shut in the third quarter as four state-run refineries and six independents begin planned maintenance, data provided by China Sublime Information Group showed.

To whittle down the surplus weighing on the domestic market, analysts expect China to export refined product, putting more pressure on a well supplied global markets.

“China will have to export product... onto Asian markets, which given demand conditions regionally does not appear particularly constructive,” said Harry Tchilinguirian, head of commodity strategy at French bank BNP Paribas.

The lower refinery throughput should reduce China’s demand for crude until around September. Some suppliers are already feeling the chill. Shipments by Angola, which sends most its oil to China, were running at the lowest level in at least a year during the first few weeks of June. 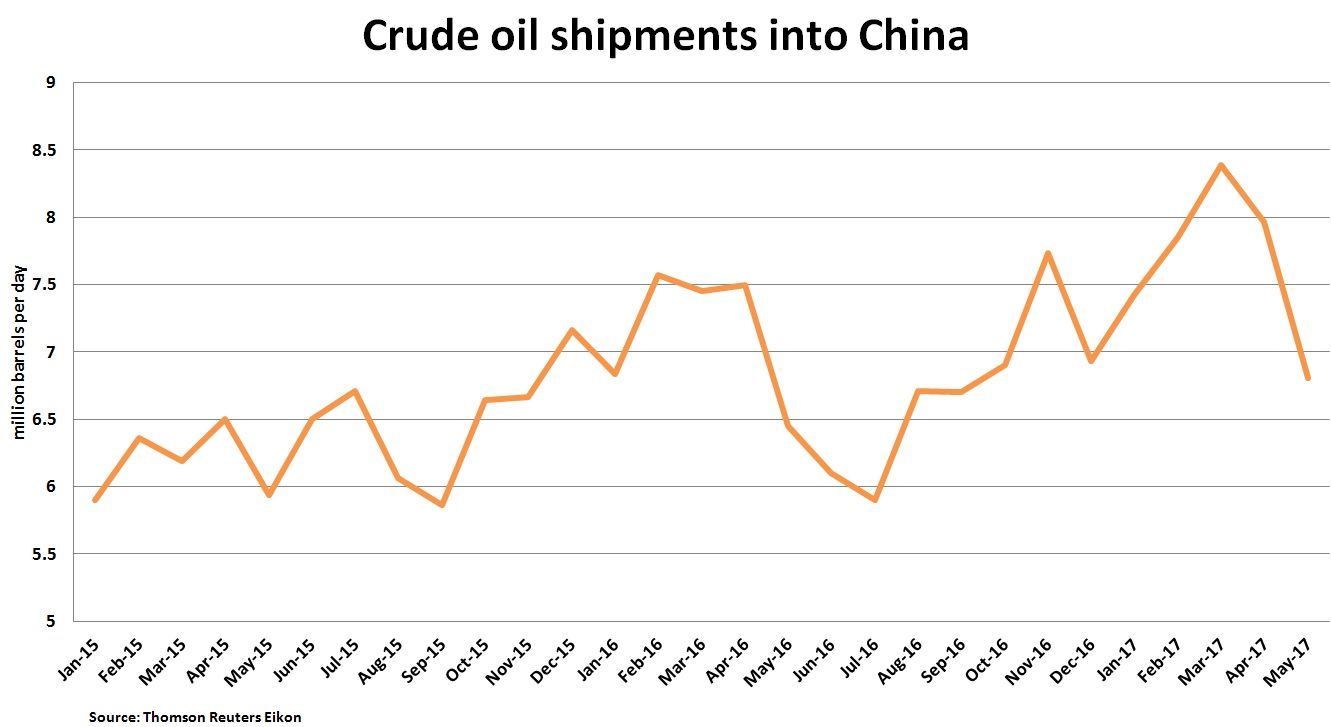 BUT DON’T WRITE CHINA OFF

The imminent cuts in China’s refining sector are likely to further weigh on oil prices, which have more than halved since 2014 due to oversupply.

However, traders say that China’s voracious thirst for oil will likely return once the immediate glut is cleared.

Taken together with the licenses awarded earlier, independent refiners now have import quotas for about 1.42 million bpd this year, and it is possible that eight companies will receive allocations for another 340,000 bpd.

As refiners start chartering tankers to import crude, the impact of the new import allowances is expected to show from the end of the third quarter.

FILE PHOTO: Employees close a valve of a pipe at a PetroChina refinery in Lanzhou, Gansu province January 7, 2011. REUTERS/Stringer/File Photo

Traders said they will meet much of this demand by re-selling crude stored in South Korea and China, particularly from Shandong province where most of the independent refiners are, and from tankers off Malaysia.

Some traders even expect demand to spike in the fourth quarter, as seen late last year as teapots rushed to use up quotas to build their case for maintaining or increasing future quota allocations.

“China is a bit unpredictable – suddenly they buy a lot out of the blue, so you can never underestimate China’s buying,” said Berentsen.