BEIJING (Reuters) - China’s move to devalue its currency reflects a growing clamor within government circles for a weaker yuan to help struggling exporters, ensuring the central bank remains under pressure to drag it down further in the months ahead, sources said.

The yuan has fallen almost 4 percent in two days since the central bank announced the devaluation on Tuesday, but sources involved in the policy-making process said powerful voices inside the government were pushing for it to go still lower.

Their comments, which offer a rare insight into the argument going on behind the scenes in Beijing, suggest there is pressure for an overall devaluation of almost 10 percent.

“There have been internal calls for the exchange rate to be more flexible, or depreciated appropriately, to help stabilize external demand and growth,” said a senior economist at a government think-tank that advises policy-makers in Beijing.

“I think yuan deprecation within 10 percent will be manageable. There should be enough depreciation, otherwise it won’t be able to stimulate exports.”

The Commerce Ministry, which on Wednesday publicly welcomed the devaluation as an export stimulus, had led the push for Beijing to abandon its previous strong-yuan policy.

Reuters could not verify how much influence Commerce Ministry officials had wielded in the decision to drive the yuan lower, but the sources said its officials were claiming victory after a long lobbying campaign against what some of them regarded as over-zealous reform led by the central bank.

The People’s bank of China (PBOC) had been keeping the yuan strong to support the ruling Communist Party’s goal of shifting the economy’s main engine from exports to domestic demand.

A stronger yuan boosts domestic buying power, helps Chinese firms to borrow and invest abroad, and encourages foreign firms and governments to increase their use of the currency.

Until the devaluation, the currency had appreciated overall by 14 percent over the past 12 months on a trade-weighted basis, according to data from the Bank for International Settlements. 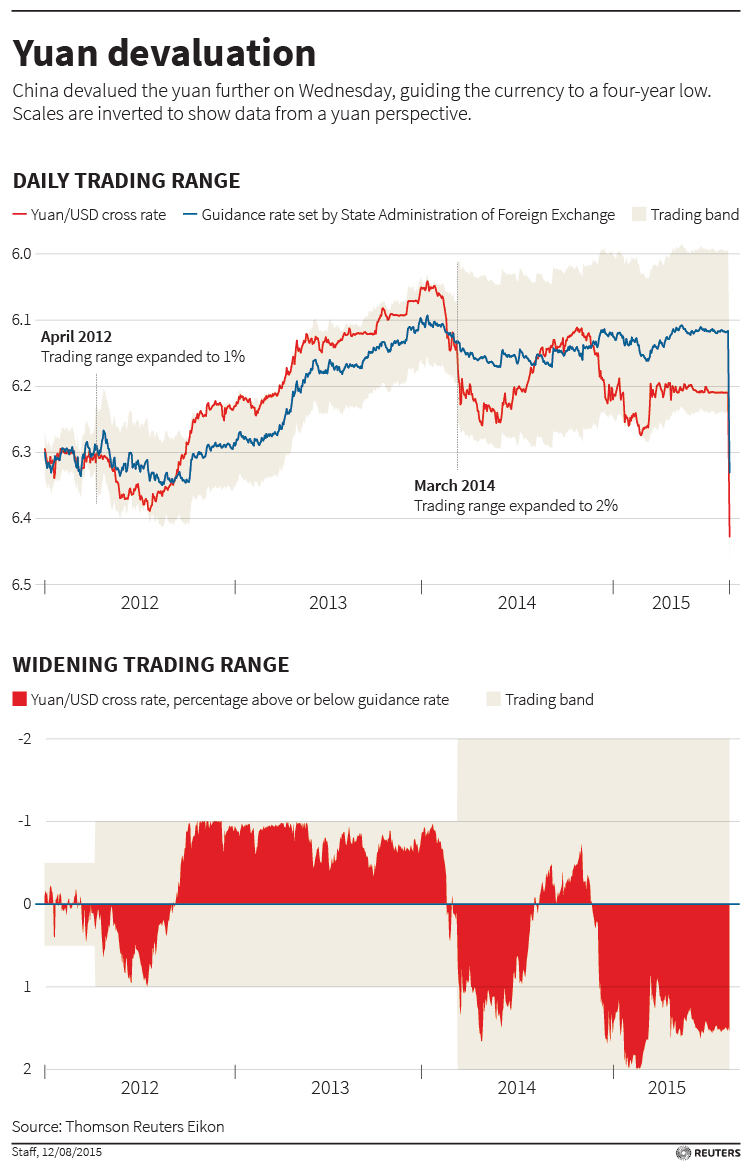 At the weekend, China posted a shock 8.3 percent slump in July exports.

“Exporters face very big pressure, and China’s economy also faces very big downward pressure,” said a researcher at the commerce ministry’s own think-tank, which recommended earlier this year that the government should unshackle the yuan.

“The yuan depreciated only slightly versus the dollar, but it has gained sharply against other currencies. China’s economy and trade are no longer strong; why should the yuan be strong?”

He said he believed the yuan CNY=CFXS could fall to 6.7 by year-end, which would represent a near 9 percent decline since the eve of the devaluation. It traded around 6.43 against the dollar on Wednesday, its lowest since August 2011.

The PBOC described its devaluation as a one-off move designed to make the currency more responsive to market forces.

The central bank guides the market daily by setting a reference rate for the yuan, from which trade may vary only 2 percent. On Tuesday, it said it was setting the midpoint based on market forces, which have been willing the yuan lower.

Beijing is determined to achieve its economic growth target of 7 percent for this year. Top leaders will chart the course for the next five years at a meeting in October, and they are likely to continue targeting annual growth of around 7 percent.

“They (top leaders) are determined to hit 7 percent target. The downward pressure is big (but) so is the determination,” said an economist inside the cabinet’s think-tank.

Beijing prefers a gradual devaluation because a single, big move could spark capital flight and undermine its goal of fostering global use of the yuan in trade and finance, sources said.

China has been lobbying the IMF to include the yuan in its basket of reserve currencies, known as Special Drawing Rights, which it uses to lend to sovereign borrowers. This would mark a major step in terms of international use of the yuan.

The IMF said on Wednesday that the central bank’s new way of managing the exchange rate appeared to be a welcome step.

“There is definitely downward pressure on the economy, but we cannot rely (alone) on currency depreciation,” said Zhu Baoliang, chief economist at the State Information Centre, a top government think-tank.

Editing by Mark Bendeich and Will Waterman