Confidence in the U.S. economy is at its lowest point in five months, Gallup reports.

The polling firm’s U.S. Economic Confidence Index was +4 for the week ending April 16, down two points from a week earlier. It’s also fallen 12 points from early March when Dow Jones Industrial Average broke through 21,000 for the first time. Since then, the benchmark stock index has fallen 2.7 percent.

Gallup’s indicator is back to where it was shortly after President Trump was elected.

“Americans’ assessments of the current state of the economy appear to have had a strong connection to the trajectory of the Dow Jones industrial average in recent months,” wrote Gallup analyst Justin McCarthy.

“Positive perceptions of the economy’s current health peaked in early March after the stock market made strong gains in January and February, but have since retreated some as the market slipped. Americans’ outlook for the economy’s future continues to struggle,” he said. 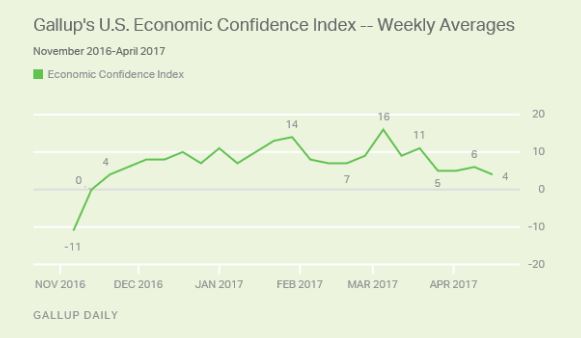