Global stock markets experienced a bit of shock (without the awe) after Republican Donald Trump upset the establishment to win the White House. Renewable energy stocks, including solar and wind power companies, took a beating on Wednesday morning as investors presumably expect a Trump presidency will be bad for those businesses.

But oil and gas companies may be poised to hitch a ride on the president-elect’s coattails, if his energy plan succeeds. Trump’s policy proposals include opening onshore and offshore leasing on federal lands, eliminating renewable energy subsidies and removing the U.S. from agreements to cap fossil fuel emissions. He says this will result in huge economic gains: an estimated $30 billion in wages for American workers, driven by $50 trillion in untapped shale, oil, natural gas, and coal. Wyoming, Montana, Colorado, Utah, and New Mexico are among the top states producing fossil fuels from those federal lands.

The hitch: A massive slide in oil prices in 2015 and concerns over a global supply glut resulted in a wave of energy sector bankruptcies which swept from Texas to North Dakota, wreaking havoc on local economies. Though energy sector job losses have abated as oil has stabilized, cuts this year total 103,147, according to research firm Challenger, Gray & Christmas. Cutbacks on energy loans and big mergers have also contributed to consolidation in the space.

While use of renewable energy has been gaining, natural gas was the largest source at 29 percent of energy use in 2015; oil also gained as lower prices boosted consumption. Though analysts indicate it may be difficult for Trump to roll back all renewable energy subsidies, he may be able to unwind many of the Obama administration’s energy proposals; if that’s the case, Renewables’ loss may be Big Oil’s win. 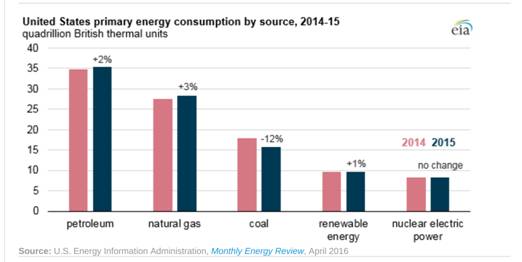