The Grinch, apparently, has transformed into the Porch Pirate.

A survey last year by insurancequotes.com found that 23 million Americans have had packages stolen from their homes before they could open them. Also, the USPS received more than 96,000 complaints about stolen mail last year, according to Ring, a video doorbell company. 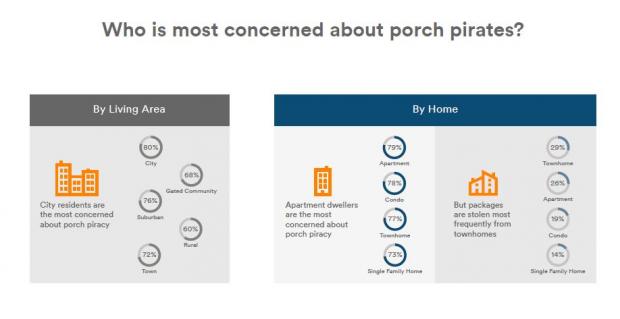 The flow of packages to doorsteps this year will be greater than ever - online shoppers spent $5.27 billion on Thanksgiving Day and Black Friday, and sales were forecast at an additional $3.3 billion on the following Monday, known as Cyber Monday, according to Adobe Digital Insights.

Until drones can deliver packages right into consumer’s waiting arms, there have been few technological advances that are solving the problem. The customer’s best move is defensive -- two-thirds say they have changed their behavior because of what has become known as “porch piracy”.

In a study just released by Vivint Smart Home, which sells home security systems, 49 percent say they have adjusted their schedules to be home for a delivery and 46 percent have changed the way they receive packages.

City-dwelling millennials who live in apartments are the most fearful, and also the most proactive. More than half of the millennials surveyed had sought help from the police about their stolen goods by sharing video evidence, and putting details of the crime on social media. As a result, 36 percent of millennials say they have recovered a stolen package.

The most useful tools technology has to offer at this point are email alerts and tracking data on packages that attempt to offer a timeframe when the package will be delivered. For extra fees, shippers like UPS allow customers to divert packages to alternate addresses or access points if they are not going to be home.

Doorbell cams and other outdoor security cameras, such as the outdoor camera that Nest launched in July or the Ring doorbell cam, are becoming more popular. Ring has had such sales volume increase that it more than doubled its employees to 700 from 300 this year. Many of these devices were ironically on sale over Thanksgiving weekend, even though they would arrive too late to monitor the arrival of holiday purchases.