Young people have the best intentions when it comes to handing their money in 2017. But the question of whether or not they will follow through remains open.

About 75 percent of people under age 35 have a financial resolution for 2017, according to a forthcoming study from LearnVest.com. That is significantly more than the overall population, which has largely given up on doing anything to improve their finances.

Only 56 percent of Americans overall plan to make financial goals for the upcoming year, and only 34 percent think that they will stick with them. Millennials are more hopeful but still a little jaded, with 42 percent of them predicting that they will fail.

Most young people who come to LearnVest for advice don’t even know what questions to ask, said Alexa von Tobel, founder of the financial planning website.

“They don’t know where to start. They ask: How do I make sense of it?” she said.

When they do have specific questions, they are typically about the very immediate concerns about paying off student loans or dealing with credit card debt. Long-range planning like saving for retirement is not on the table yet.

Not that any of the other generations are doing any better on retirement resolutions. A recent study from Voya Financial found that only 20 percent of their respondents had reviewed or altered their retirement plans in the last year. Comparatively, 43 percent tended to their social media profiles in the same time frame.

Von Tobel has hundreds of suggestions for helping people break huge goals into smaller tasks that can be more easily achieved. But she can’t do anything to overcome the basic math problem at play. “The average millennial has about $30,000 in debt when they enter workforce. The average salary is $35,000,” von Tobel said. “This mystifies them the most. They say, ‘how on earth can I be saving, when I’m about flat on my income and debt?’” 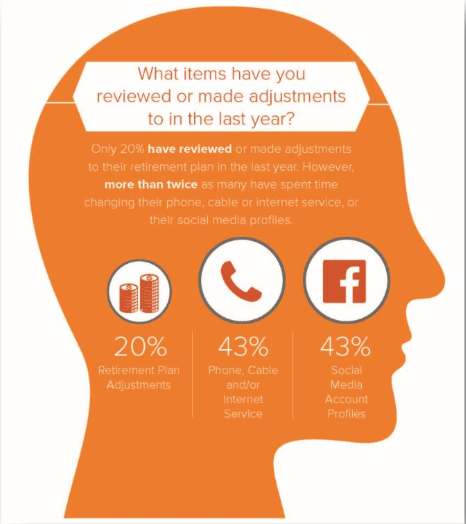