Commentary: It's not only Trumpers who believe voting is rigged

Trends in American public attitudes have seemed to be breaking Hillary Clinton’s way, with a majority of polls indicating her lead over Donald Trump widening. But even before FBI Director James Comey announced Friday that additional emails that might be connected to Clinton have been found, there were signs of potential wild cards that could add greater uncertainty to the election outcome, as well as volatility to the next four years.

Throughout his campaign, Trump has advanced the idea that the political system is “rigged” against the American public. More recently, he expanded his claim to include the election process itself. This dovetails with his refusal, at the final presidential debate, to say he would accept the election results on November 8.

A substantial majority of Americans agree with Trump that “the system is rigged.”

More than 70 percent of both Republicans and independents concur, according to our University of Maryland Critical Issues Poll (fielded by Nielsen Scarborough from October 5-14; 2.5 percent margin of error). Even a majority of Democrats said they believe this.

A recent Reuters/Ipsos poll also found that close to 80 percent of Republicans were concerned about the accuracy of the final vote. Only 60 percent were confident their votes will be counted accurately.

Our poll agrees with the Reuters/Ipsos poll, and most national polls, in showing that Clinton is leading. It showed her ahead by 9 percentage points nationally, and more than 60 percent of respondents expected her to be the next president. The Trump video scandal may have turned as many as 6 percent of registered voters away from potentially supporting him.

Still in Trump’s favor, however, is that most Americans expressed a desire for “significant” economic and political change. And more people saw Trump as the agent of system change. If the hunch of a majority of Americans across the political spectrum is right, and many voters who may vote for Trump are not saying so publicly, there remains a degree of uncertainty about how some will ultimately vote. (The recent Reuters/Ipsos showed this as well.)

However, our poll also found signs that may hearten Trump’s supporters.

First, two-thirds of Americans reported that they somewhat agree or strongly agree that “our system is rigged against people like me,” including a majority of Democrats. 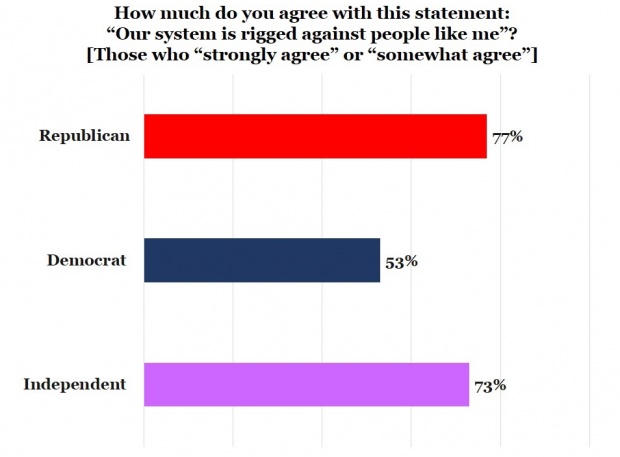 There is little difference between younger (18 to 34 years old) and older adults (35 and up) in their sentiments about a rigged system. Some 64 percent of younger Americans said they somewhat or strongly agree with the statement, compared to 66 percent of older adults.

Trump’s strongest constituency has been the non-college educated, and opinions about a rigged system resonate more with them than college-educated Americans. Almost three-fourths of Americans without a college education either somewhat or strongly agreed with the statement. Still, more than half (59 percent) of those with at least some college shared that opinion.

Second, about three-quarters of Americans care “a great deal” that their vote sends a message to the political establishment, including 63 percent of Democrats. 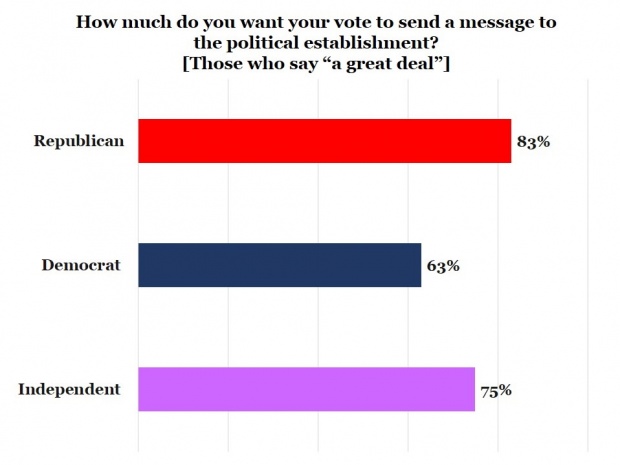 Third, practically all Americans want to see “significant change” to the American political and economic system (98 percent and 97 percent, respectively) — and a majority see Trump as more an agent of change. 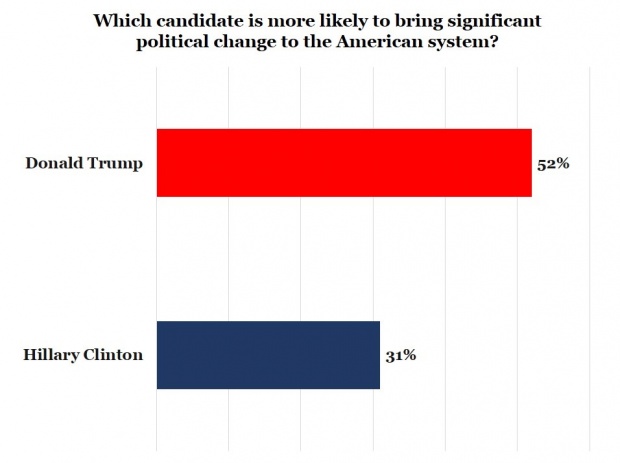 Although this election doesn’t seem to turn on specific issues, some do matter, particularly the U.S. Supreme Court. Two-thirds of respondents in our poll said who the next president will choose to fill the vacancy on the Supreme Court is very important or extremely important to their choice for president. This included 73 percent of Republicans, 62 percent of Democrats and 45 percent of independents.

But if there is something that best characterizes the 2016 mood of the electorate across the political spectrum, it is the belief that the system is rigged, which both independent Senator Bernie Sanders of Vermont and Trump tapped into early in their campaigns. Even if Trump loses on Election Day, this mood will likely carry over beyond the presidential contest and may affect the ability of elected officials to govern.

It may be too late for Trump to turn the tide. If he has a shot, it is in Americans’ strong desire for major political and economic change and the pervasive sense that the system in rigged. And in the degree to which some who see Trump as deeply flawed are prepared to roll the dice.