SAN FRANCISCO (Reuters) - Venture capital investments in financial services startups are showing a geographical split, with funding for so-called “fintech” companies in the United States cooling but soaring in Europe, according to a new report out Wednesday.

Years of hype that led to high valuations, concerns over high loan losses among online lenders and industry scandals such as Lending Club Corp falsifying loan documentation, has resulted in a slowdown for the U.S. fintech market, say investors. Meanwhile, younger markets with a less complex regulatory regime and fewer failed startups to deter investors are attracting more dollars. 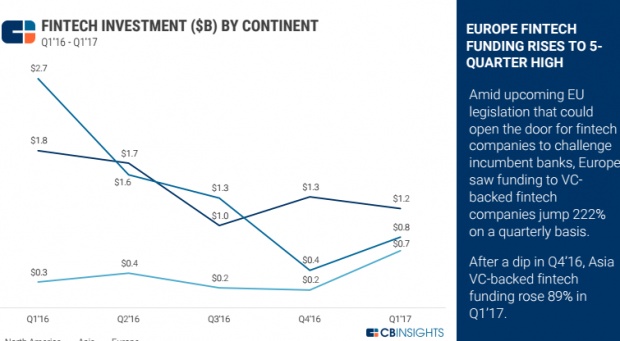 In the first quarter this year, venture-backed fintech companies in the U.S. raised $1.1 billion, an 8 percent drop from the previous quarter and down 39 percent from the same period a year ago, according to a new report from venture capital database CB Insights.

U.S. fintech startups closed a total of 90 financing deals, down 9 percent from the previous quarter, and the median deal size in dollars also fell.

Meanwhile, investments during the first quarter in European venture-backed fintech companies jumped to $667 million, a 250 percent increase over the previous quarter and 133 percent climb from a year ago.

The number of fintech deals in Europe spiked 74 percent from the previous quarter to 73, and the average deal size ticked up.

A confluence of trends - including the rise of digital banks, regulations that encourage startups to experiment with new financial products and the popularity of online payments - has positioned Europe for a fintech boom, said Matthew Wong, senior analyst for CB Insights.

The fintech pullback in the United States is also part of a broader startup investment slowdown, as venture capitalists rein in spending following a frenzy in 2014 and 2015 that drove up valuations.

Still, for the hottest U.S. companies, there was no problem raising cash. SoFi, which offers various loan and refinancing plans, raised $500 million at a $4.5 billion valuation.

“Outside of that, we didn’t see as much enthusiasm for larger-scale financing in the U.S.,” Wong said.

More graphics from the CBI report: 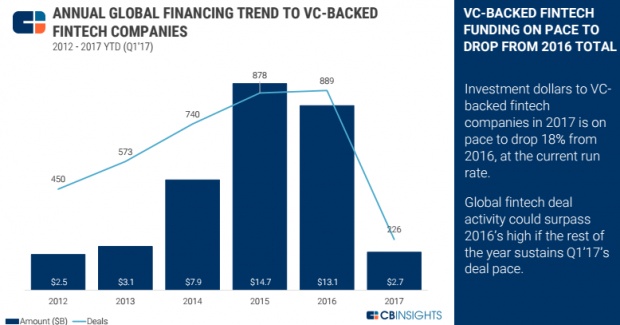 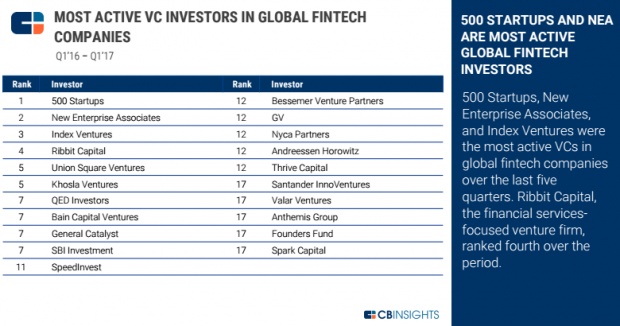