PARIS (Reuters) - Reuters photographer Philippe Wojazer was at the Elysee Palace waiting for President Emmanuel Macron to hold a press conference on the “yellow vest” protests when his mobile phone lit up with news that Notre-Dame cathedral was on fire.

As a designated pool photographer for the event, he was trapped -- he had to stay and shoot Macron’s address despite the disaster unfurling barely a kilometer away.

But when Macron decided to cancel the news conference and visit the scene of the blaze on Paris’s Ile de la Cite instead, Wojazer, a 30-year Reuters veteran, realized he had a chance to outmaneuver his rivals.

Aware that astonishing images of the burning landmark and its collapsing spire had been hitting news websites, TV channels and social media for several hours, he knew there was only one shot that would set him apart.

“The image that wasn’t out there was Notre-Dame’s interior. That’s when I said to myself: ‘that’s what I need to see’,” Wojazer recounted.

The result: an eerie shot down one of Notre-Dame’s two naves, smoke rising from blackened debris on the stone flooring, silhouetted angel figurines against the wall and a raised golden cross on the altar, bathed in artificial light. 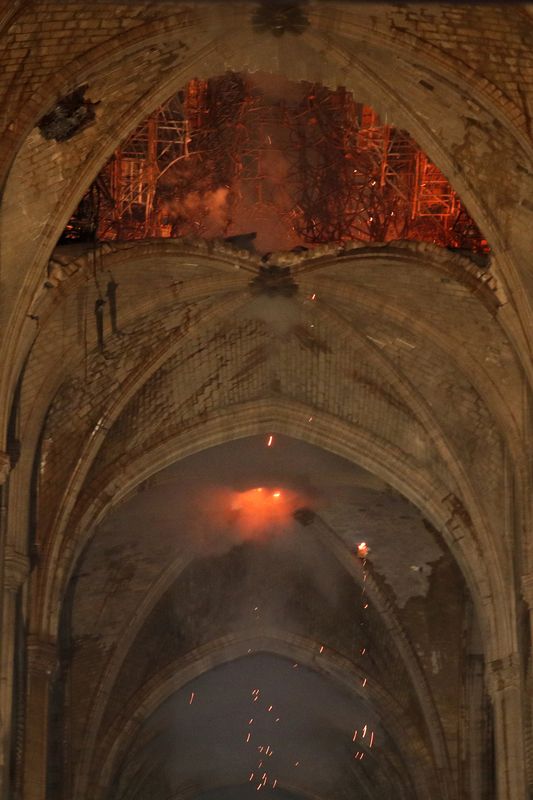 The photo, taken from a doorway some 60 meters (200 feet) away, gave the world its first view inside the eight-centuries-old gothic masterpiece, revealing that the overall damage might not be as grave as feared from outside.

There is little sign of blackening on the towering internal walls, and an ornately carved wooden pulpit stands unscathed. It also appears that the 13th century organ is intact.

Capturing the scene was not easy, though.

“I don’t know why this shot had an impact on people. Did I see it at just the right moment? I don’t know.

“The fact the cross is shining, I found it a nice shot, it has some end-of-the-world feel. But apart from that, it is the reactions of others that are more important than my own.”

(Backstory is a series of reports showing how Reuters journalists work and the standards under which they operate.)