NAMIE, Fukushima Workers repair a damaged home nearby, and about 60 employees busily prepare for the return of former residents in the largely untouched town hall. Not far away, two wild boars stick their snouts in someone’s yard, snuffling for food.

Signs of life are returning nearly six years after panicked residents fled radiation spewed by the nearby Fukushima Daiichi nuclear power plant, when it was struck by an earthquake and tsunami.

Still, only several hundred of the original 21,500 residents plan to return in the first wave, estimates Hidezo Sato, a former seed merchant who helped draw up a blueprint to rebuild the town.

“As a person who used to sell seeds for a living, I believe now is a time to sow seeds” for rebuilding, said Sato, 71. “Harvesting is far away. But I hope I can manage to help bring about fruition.”

For a graphic on Fukushima returnees, click here tmsnrt.rs/2lv77E6 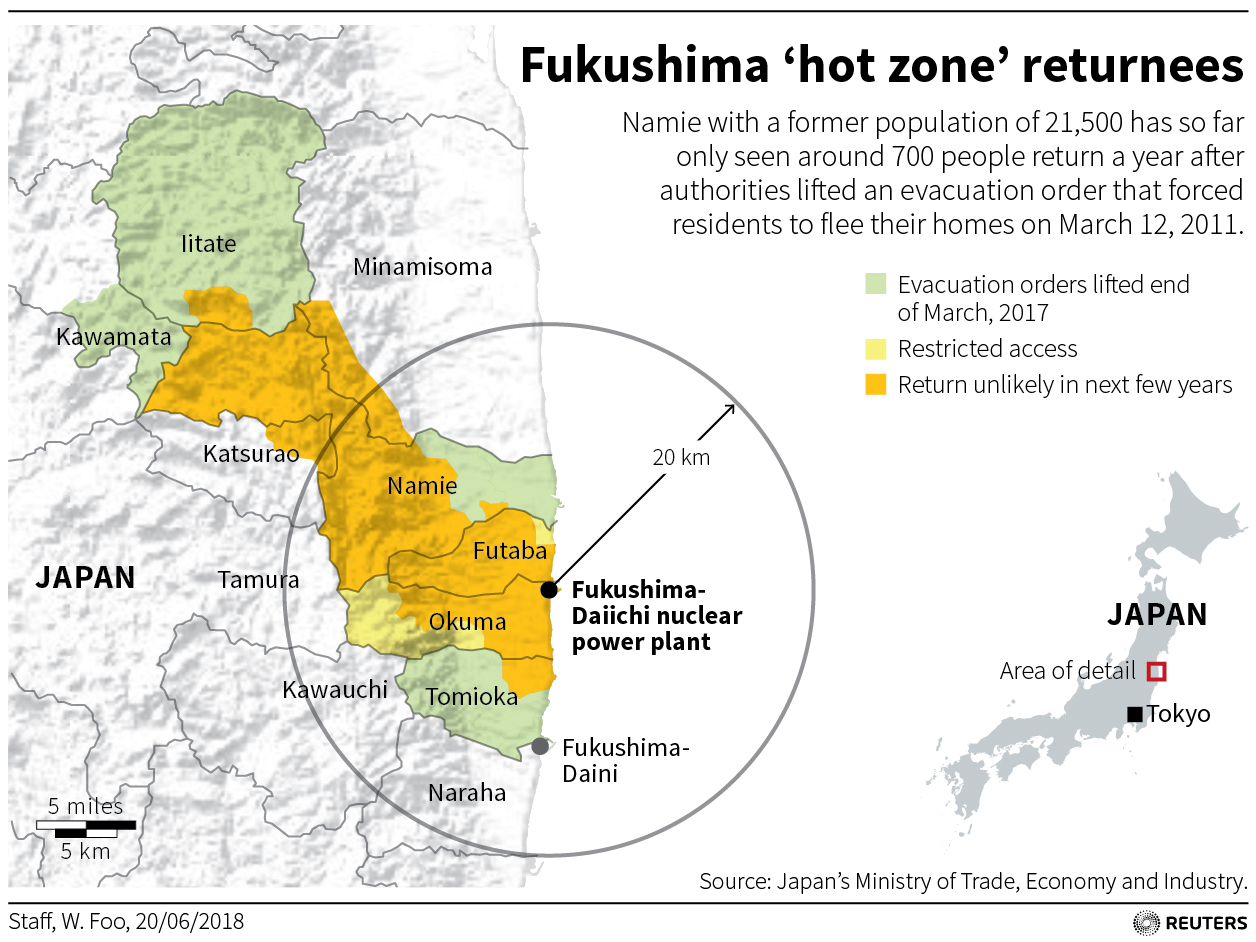 Since November, people who registered have been allowed to spend nights in the town, but residents will not need permission to stay round the clock after Japan lifts evacuation orders for parts of Namie and three other towns at the end of March.

Just 4 km (2.5 miles) away from the wrecked plant, Namie is the closest area cleared for the return of residents since the disaster of March 11, 2011.

But the town will never be the same, as radiation contamination has left a big area off limits. And it may never be inhabitable.

More than half - 53 percent - of former residents have decided not to return, a government poll showed last September. They cited concerns over radiation and the safety of the nuclear plant, which is being dismantled in an arduous, 40-year effort.

More than three-quarters of those aged 29 or less do not intend to return, which means old people could form the bulk of the town’s population in a future largely devoid of children.

“Young people will not go back,” said Yasuo Fujita, a former Namie resident who runs a restaurant in Tokyo, the capital. “There will neither be jobs nor education for children.”

Fujita said he did not want to live near a possible storage site for contaminated soil, now being systematically removed.

Radiation levels at Namie town hall stood at 0.07 microsieverts per hour on Feb. 28, little different from the rest of Japan.

But in the nearby town of Tomioka, a dosimeter read 1.48 microsieverts an hour, nearly 30 times higher than in downtown Tokyo, underscoring lingering radiation hotspots.

For the towns’ evacuation orders to be lifted, radiation must fall below 20 millisieverts per year. They must also have functioning utilities and telecoms systems, besides basic health, elderly care and postal services.

Namie, which used to have six grade schools and three middle schools, plans to eventually open a joint elementary-junior high school. So children will need to commute to schools elsewhere initially.

A hospital opens later this month, staffed with one full-time and several part-time doctors.

Prospects for business are not exactly bright in the short term, but lumber company president Munehiro Asada said he restarted his factory in the town to help drive its recovery.

“Sales barely reach a tenth of what they used to be,” he said. “But running the factory is my priority. If no one returns, the town will just disappear.”

Shoichiro Sakamoto, 69, has an unusual job: hunting wild boars encroaching on residential areas in nearby Tomioka. His 13-man squad catches the animals in a trap before finishing them off with air rifles.

“Wild boars in this town are not scared of people these days,” he said. “They stare squarely at us as if saying, ‘What in the world are you doing?’ It’s like our town has fallen under wild boars’ control.”

Some former Namie residents say the evacuation orders should remain until radiation levels recede and the dismantling of the ruined nuclear plant has advanced.

But it is now or never for his town, Mayor Baba believes.

“Six long years have passed. If the evacuation is prolonged further, people’s hearts will snap,” he said. “The town could go completely out of existence.”