Not much saving going on in Health Savings Accounts

NEW YORK Health Savings Accounts feature prominently in the new healthcare bill being considered by the U.S. House of Representatives, with a variety of changes in store.

But research shows not many participants are actually saving money beyond the initial tax break.

More than 20 million Americans currently have these accounts, which allow people with high-deductible health plans - above $1,300 for an individual or $2,600 for a family - to put aside money for out-of-pocket medical expenses and save leftover funds for future expenses.

Contrary to Flexible Spending Accounts, in which you put aside pre-tax dollars and have to spend it all in a year or lose it, there is no yearly expiration for HSAs. The account is yours for good.

You get a tax break for your contributions, and if you earn interest or investment growth on your account, that is also tax-free as long as you use the money for qualified expenses.

These accounts have sky-rocketed in the last six years, with 85 percent of the accounts opened since 2011, according to the Employee Benefit Research Institute, or EBRI.

New research shows how people are using them, which may shed some light on the best way to make changes.

The most prominent takeaway is that there is not actually that much “saving” beyond the tax break in Health Savings Accounts. Money goes in and comes right back out, with only a fraction held over.

Here are some other key points analysts have learned:

Want to encourage people to put aside money for their medical expenses? Have an employer start the kitty.

In accounts not associated with a workplace, the average contribution was $1,713, according to Devenir, an HSA research consultant. 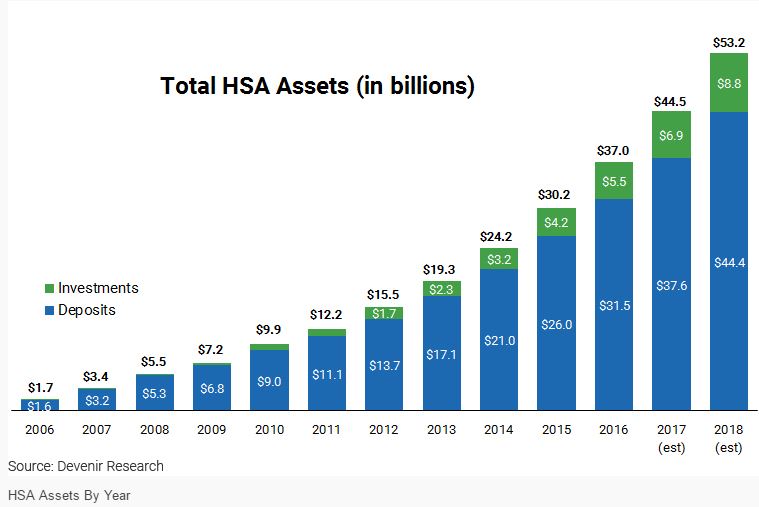 “Any minimal employer contribution - even just $500 - and you’ve essentially given them the jump start,” said Steve Christenson, executive vice president at Ascensus, a retirement and savings plan provider. “When you say ‘here are dollars to start with and here’s some additional information on how to keep funding it’ - those two simple things go a long way.”

* Not even close to the max

Among the propositions of the new healthcare bill is raising the maximum contribution allowed to HSAs, which this year was capped at $3,400 for an individual and $6,750 for a family. The bill proposes to raise that ceiling to be equal to the out-of-pocket maximum for high-deductible plans, which is $6,550 for individuals and $13,100 for families.

What we know from current behavior is that just 15 percent contribute the maximum, according to Devenir. More than 30 percent do not contribute any money at all in a given year.

Most HSAs are churn accounts, and saving might actually be going down instead of up. Devenir’s latest report found participants holding over less in 2016, just $5.7 billion, compared with $5.9 billion in 2015 and $6.2 billion in 2014.

A HelloWallet study from 2015 found that nearly 30 percent of HSA participants spent nearly all they contributed in a year.

This is not necessarily a bad thing, as you still get a tax deduction for the contribution, said Paul Fronstin, director of Health Research and Education for EBRI.

Most of the $37 billion in HSA accounts is sitting in cash, with only $5.5 billion invested in any way, according to Devinir. EBRI’s study found that investments made up only about 3 percent of the total deposits. In today’s low interest-rate environment, that means these accounts are not keeping up with inflation, and actually losing value over time.

“If you think you’re going to spend most of the funds, it doesn’t make sense to invest it,” said Evan Powers, a certified financial planner with Cypress Financial Planning in Charlottesville, Virginia, and an adviser for myfinancialanswers.com.

Those who are saving and investing are doing better - they have an average balance of $14,971, seven times larger than those who do not invest.