Explainer: What will it cost to denuclearize North Korea?

VIENNA (Reuters) - At a summit in Singapore in early June with U.S. President Donald Trump, North Korean leader Kim Jong-Un pledged to “work toward complete denuclearization of the Korean Peninsula”.

Follow-up talks between U.S. Secretary of State Mike Pompeo and North Korean officials are due to be held, and Trump said last week, “It will be a total denuclearization, which has already started taking place.”

Assuming denuclearization of North Korea does take place, what would it look like and how much would it cost?

WHAT DOES DENUCLEARIZATION MEAN?

That is far from clear and may have different meanings for each side.

The exact form denuclearization takes will depend on negotiations. North Korea may seek to continue some nuclear activities with possible civilian uses like uranium enrichment, as Iran is able to do under its deal with major powers.

For Washington, however, denuclearization means at least eliminating the threat posed by North Korea’s nuclear weapons. That requires removing or dismantling existing weapons, shutting down the program that makes them, and limiting or eliminating Pyongyang’s ability to enrich uranium and produce plutonium, another key ingredient in atomic bombs. 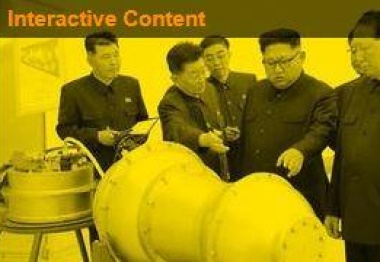 To complicate matters further, much remains unknown about North Korea’s nuclear activities, its weapons program and its ballistic missile capabilities. These are among the most secret activities in a highly secretive state that foreign intelligence services have struggled to penetrate.

Pyongyang tested an intercontinental ballistic missile in December that governments and experts said appeared to bring all of the continental United States within range, though many believe it has yet to fully develop the re-entry vehicle in which the warhead returns to the Earth’s atmosphere as it approaches its target.

Historically the Yongbyon complex north of Pyongyang has been at the heart of North Korea’s nuclear program. It houses a reactor that produces spent fuel from which plutonium is reprocessed, and an experimental reactor that analysts observing satellite imagery say is close to being completed.

Yongbyon is also widely thought to house a uranium enrichment plant, though many experts say one or more larger enrichment sites are likely to exist outside Yongbyon.

By pursuing plutonium reprocessing and uranium enrichment, North Korea has developed the two tracks to obtaining the fissile material for nuclear weapons.

While Yongbyon is closely watched by satellites and was monitored by International Atomic Energy Agency (IAEA) inspectors before they were expelled in 2009, far less is known about facilities elsewhere in the country.

Nuclear analyst David Albright of the Institute for Science and International Security has quoted an anonymous “official source” as saying that about half of North Korea’s nuclear facilities are outside Yongbyon and the site where it has carried out nuclear tests.

There are few cases in which a country has voluntarily given up nuclear weapons. Those that have did so in particular circumstances, and provide imperfect analogies.

South Africa shut down its nuclear weapons program and dismantled its weapons shortly before the 1994 end of apartheid. Several former Soviet republics gave up their weapons after the 1991 break-up of the Soviet Union. Of those, Ukraine had the most, roughly 5,000, and it held onto them the longest.

South Africa kept its nuclear weapons program secret until after it had dismantled its six atom bombs and destroyed many of the documents relating to them, meaning the cost is not known. The weapons were dismantled in just months.

In Ukraine, which had ground-based strategic weapons with roughly 1,250 nuclear warheads, a Defence Ministry official said the United States paid around $350 million to dismantle the silos from which those missiles would have been launched.

At its peak Ukraine’s nuclear arsenal was the third biggest in the world. North Korea’s is much smaller - its exact size is not known but several analysts estimate it has around 30 weapons.

Given the uncertainties involved, most analysts are reluctant to be more specific than to predict costs for denuclearization running into billions of dollars.

“I think it would be fair to say that dismantling and cleanup of a substantial part of the North Korean nuclear complex (not even considering the missile complex) would cost many billions and take 10 years or so,” said Siegfried Hecker, a nuclear scientist and Stanford University professor who visited Yongbyon in 2010.

The U.S. Congressional Budget Office in 2008 estimated at $575 million the cost of dismantling the reactor at Yongbyon and two nearby plants that made fuel rods and separated plutonium from spent fuel, plus shipping its spent fuel out of the country and reprocessing it. It said that should take four years.

North Korea’s nuclear activities and stockpiles have increased significantly since 2008. There is now a second reactor at least near completion at Yongbyon, and the CBO estimate did not cover uranium enrichment, weapons facilities, missile technology or sites like uranium mines.

For the whole process to work, Washington will need to be convinced North Korea has declared all its relevant sites and activities. Verification is likely to play an important role.

Any doubt over whether North Korea has declared all its activities could lead to a dispute like the one over whether Iraq had stockpiles of weapons of mass destruction before the U.S.-led invasion of that country in 2003. A balance will have to be struck between transparency and intrusiveness.

The cost of IAEA safeguards activities for Iran, where the agency is policing the country’s 2015 nuclear deal, was 15.8 million euros ($18.42 million) last year, according to a confidential IAEA report obtained by Reuters.

But the IAEA was already inspecting Iran’s declared nuclear facilities before the deal was reached. Starting essentially from scratch in North Korea will be much more expensive.

“If you take the annual cost of IAEA verification and monitoring in Iran and multiply it by roughly three or more, you might get a rough estimate for the annual cost for North Korea after any denuclearization deal,” Mark Fitzpatrick of the International Institute for Strategic Studies said.