BURNS, Ore. (Reuters) - Police and federal agents searched a U.S. wildlife refuge in Oregon for explosives and evidence on Friday, a day after the last holdouts in a protest over federal control of Western land surrendered to end a six-week armed standoff.

After their surrender on Thursday, protesters told authorities they had left behind booby traps but did not say whether the trip wires and other devices would trigger explosions, a law enforcement official, speaking on the condition of anonymity, told Reuters. 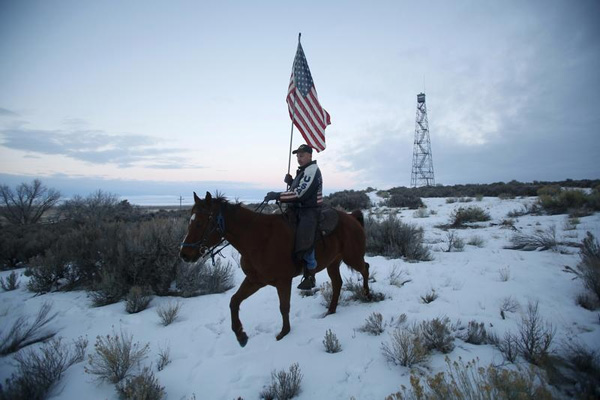 Materials to create explosives could be found on the refuge, the official said, because workers there previously performed controlled burns.

The final four protesters had enough food on hand to last them for many months, the official said.

The nearby town of Burns, which has been caught in the middle as the occupiers protested federal government control of expanses of Western land, was quiet on Friday as residents sought to resume normal life after the 41-day standoff.

The final four protesters surrendered on Thursday with David Fry, 27, repeatedly threatening suicide in a dramatic final phone call with mediators before he gave up. All 12 people arrested in connection with the standoff will face charges of conspiracy to impede federal officers, according to the FBI.

The takeover, which began on Jan. 2, was sparked by the return to prison of two Oregon ranchers convicted of setting fires that spread to federal property near the refuge. It was led by brothers Ammon and Ryan Bundy, who were arrested in January along with nine other protesters on a snow-covered roadside while on their way to speak at a community meeting in John Day, Oregon.

A spokesman for the group, Robert “LaVoy” Finicum, was shot dead in the stop.

The Bundys’ father, Cliven, was arrested on Wednesday night in Portland and charged with conspiracy and assault on a federal officer in connection with a 2014 standoff on federal land near his Nevada ranch.

The official who spoke to Reuters on the condition of anonymity said that the Bundy brothers and others began confronting the local sheriff in November but federal authorities did not get involved until the protesters began occupying the refuge.

That low profile was intentional because “a federal face is often a trigger for these militia” groups, the official said.

The official told Reuters that authorities made the decision to arrest the Bundy brothers and their fellow protesters out of concern that the standoff movement could spread as the group took their message to other communities.