(Reuters) - The National Football League’s Rams left behind more than bitterness when the team ditched St. Louis for Los Angeles last month - it left a stadium saddled with about $144 million in debt and maintenance costs.

Taxpayers will now shoulder the remaining payments for the Edward Jones Dome with only the help of revenue from tractor pulls, volleyball tournaments, concerts and the like.

St. Louis Board of Aldermen President Lewis Reed has asked the NFL to help pay off the stadium, but so far has gotten no response.

“The fans are being left holding the bag,” Reed said. “I think they should factor that into the total cost of the move.”

The leftover debt and maintenance costs are another example of the NFL’s negotiating prowess with many cities, sports economists said, and also reflects larger problems with the deal St. Louis struck with the Rams.

Even before the team decided to leave, the city’s stadium revenues didn’t cover its payments, leaving the city with annual shortfalls.

The league and the Rams did not respond to requests to comment.

Across the country, cities have gotten stuck with substantial costs after sports teams leave or even move across town. Often, local governments must pay bonds, maintenance costs, or demolition fees after a team is gone.

Houston’s iconic Astrodome, once dubbed the Eighth Wonder of the World, sits empty a decade after the facility housed 25,000 evacuees of Hurricane Katrina and nearly 20 years after the Oilers left. The Detroit Lions’ former Silverdome in Pontiac, Michigan, was used sporadically after the team moved downtown in 2002, but shuttered for good when the inflatable roof was deflated.

Today, after years of exposure to the elements, the Silverdome is slated for demolition. Robert F. Kennedy Memorial Stadium, the Washington Redskins’ former home, may meet the same fate, said Greg O’Dell, president and CEO of Events DC, the convention and sports authority that owns the stadium.

NFL stadiums are primarily designed for one thing - eight home games a year - and don’t necessarily adapt well to alternate uses. Cities also have little chance of attracting a new professional team to an old stadium; building a glitzy new one is often what it takes to win league approval.

It’s not uncommon for local governments to pay debts and maintenance on abandoned stadiums for years - even after it is demolished. Seattle’s Kingdome bonds were retired only last year, 15 years after the facility was imploded in 2000. Philadelphia has $160,000 left to pay on Veterans Stadium, more than a decade after the facility was torn down. Debt from Indianapolis’ Hoosier Dome - demolished in 2008 - still hadn’t been paid off in 2013, according to state filings.

In St. Louis, the $280 million agreement to build the Edward Jones Dome for the Rams raised eyebrows since its opening in 1995. Unlike other stadium deals, the St. Louis contract included a clause requiring the 67,000-seat dome be maintained to a first-tier standard, meaning the facility must be considered among the top quarter of all NFL football facilities.

As the stadium aged - and new, state-of-the-art NFL stadiums were erected in New Jersey, Texas, and California – the bar became more onerous.

“This was a contract designed to be broken” by the team, said Matheson, who studies stadium finances. “They had a terrible, terrible contract with the Rams.” 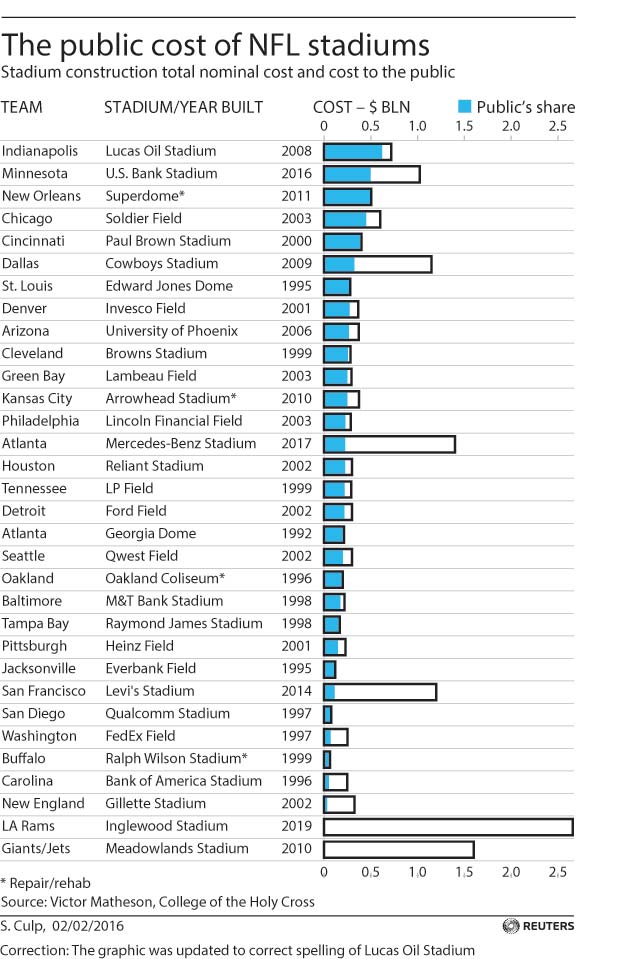 A few years ago, to maintain the stadium’s top-tier status, the Rams sought an estimated $700 million of improvements. St. Louis balked, and the Rams started looking elsewhere.

To cover costs, the city paid about $6 million for annual debt service and maintenance for the stadium but collected only about $4.2 million in direct revenues from Rams games, according to the Mayor’s office. The state, which paid $12 million annually, made $12.4 million in revenues from NFL activities, Missouri Department of Economic Development estimated. The county paid $6 million annually; it’s unclear how much of that was offset by Rams-related revenues.

All three entities will continue paying their share until the debt is paid off in 2021.

Without the Rams’ revenues, St. Louis is looking at an even deeper financial hole. And it’s coming at a time when the city is facing a spiking murder rate, high poverty and high debt. Last August, Moody’s Investors Service downgraded the city’s credit rating to Aa1 from Aa3, which could lead to increased borrowing costs.

“We’re going to have to tighten the belt in a few places,” said Reed, the alderman.

In 2002, St. Louis city voters displayed their frustration with public stadium financing by passing a ballot measure that required a public vote to approve any future sports subsidies.

But last summer, a judge invalidated the law as too vague. The next day, voters rejected a $180 million proposal to purchase more fire trucks and improve police equipment.

The juxtaposition of residents voting on such basic needs while being denied a say on stadium subsidies did not sit well with Jeanette Mott Oxford, executive director of Empower Missouri, a social justice organization, and co-founder of the Coalition Against Public Funding for Stadiums that campaigned for the ordinance.

“When you live in an urban area, there is money needed for public safety, public health, even just repairing potholes,” Oxford said. “I just became so cynical.”