(Reuters) - When the U.S. Supreme Court on Monday takes up a challenge brought by Texas and other states to President Barack Obama’s executive action on immigration, the eight justices face a series of legal questions beginning with whether Texas and the other state challengers even have grounds to bring the case.

Obama’s November 2014 orders affect immigrants in the country illegally whose children are U.S. citizens or lawful permanent residents or who themselves have been in the United States since they were children.

Here is a look at some of the key legal questions in the case:

To bring a case, challengers must first demonstrate that they have legal “standing,” arising from some injury or negative consequences. In this case, that means the states need to show that they would be hurt by the Obama administration’s deferral of deportation for immigrant parents and children with deep ties to the United States but who are in the country illegally.

The state of Texas has taken the lead in the lawsuit against the Obama administration to block the president’s actions. Texas asserts that it has standing largely because of the expected financial cost to the state of processing temporary driver’s licenses for illegal immigrants with new authorization to live in the United States.

Texas subsidizes the cost of processing driver’s licenses and contends Obama’s actions would cost it millions of dollars. The Obama administration rejects that basis for standing to file suit, asserting that any such costs are “incidental” and could be avoided by the state. Obama administration lawyers say Texas could eliminate the subsidies for these driver’s licenses and eliminate the harm claimed by the state.

If a majority of the justices finds that Texas lacked a sufficient injury to sue, the case of United States v. Texas ends there and the Obama administration wins. 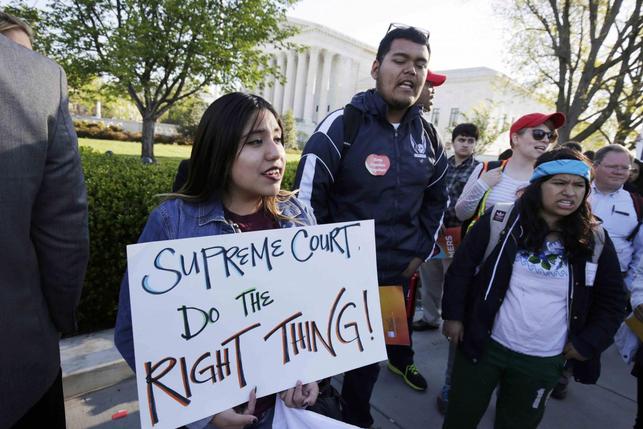 Immigration activists rally outside the U.S. Supreme Court as justices hear arguments in a challenge by 26 states over the constitutionality of President Barack Obama's executive action. REUTERS/JOSHUA ROBERTS

If the justices agree that Texas has standing to bring the case, they then would consider whether deferred-deportation policies that were part of Obama’s actions violated rule-making requirements in a federal law called the Administrative Procedure Act. Under that law, federal agencies typically must issue a general notice of a proposed rule and give interested parties a chance to comment.

Obama administration lawyers say the deferred deportation practices are not binding rules subject to the Administrative Procedure Act. Rather, they characterize these policies as an outgrowth of the U.S. Department of Homeland Security’s discretion in determining deportation priorities.

The administration contends that the homeland security secretary should be able to focus his department’s limited resources on deporting serious criminals and securing the border. 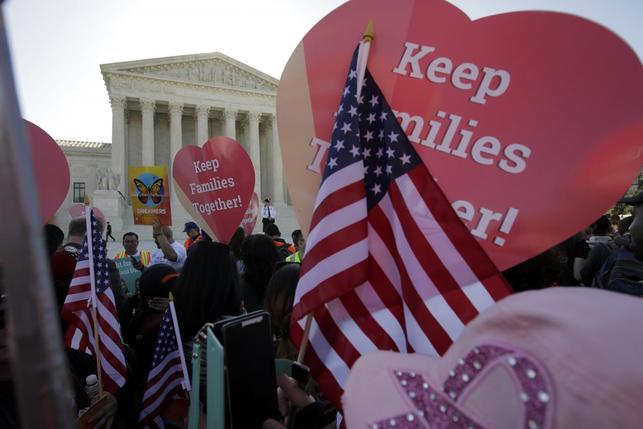 A protester holds a sign as immigrants and community leaders rally in front of the U.S. Supreme Court to mark the one-year anniversary of President Barack Obama's executive action. REUTERS/Joshua Roberts

A final possible question for the justices is whether the deferred deportation violates a dictate of the U.S. Constitution that presidents must “take care” to “faithfully execute” the nation’s laws.

Texas and the other states that brought the lawsuit say Obama, in taking executive action that bypassed Congress, crossed that line because Congress is in charge of deciding who is a lawful or unlawful immigrant.

The Obama administration says it was faithfully executing the authority to determine priorities under immigration law.

(Editing by Will Dunham)