FILE PHOTO: A police officer walks by columns on first day with newly sworn in Associate Justice Brett Kavanaugh on the court at the Supreme Court in Washington, U.S., October 9, 2018. REUTERS/Joshua Roberts/File Photo

The nine justices on Wednesday heard the administration argue for sweeping government authority to detain immigrants awaiting deportation after they complete sentences for criminal convictions, even years after leaving prison.

The administration, which has taken a hard line toward immigration, has appealed a lower court ruling in favor of immigrants that the government has said undermines its ability to deport immigrants who have committed crimes.

Gorsuch, appointed by Trump last year, questioned the scope of the government’s power to detain people without hearings. In April, Gorsuch joined with the court’s four liberal justices in a 5-4 ruling in another immigration case that could hinder the administration’s ability to step up the removal of immigrants with criminal records.

Like some of the other five conservatives on the court, Kavanaugh asked questions of lawyers in the case that seemed more sympathetic to the administration’s stance. It was his second day on the bench after being confirmed by the Senate on Saturday following a fierce confirmation battle.

There is the possibility of a compromise ruling.

Under federal immigration law, immigrants convicted of certain offenses are subject to mandatory detention during their deportation process. They can be held indefinitely without a bond hearing after completing their sentences.

Liberal Justice Stephen Breyer, expressing concern about the practice, noted that providing hearings for those held in detention is a long-established right “in a country which gives every triple ax murderer a bail hearing.”

The San Francisco-based 9th U.S. Circuit Court of Appeals ruled in 2016 that convicted immigrants who are not immediately detained by immigration authorities after finishing their sentences cannot later be placed into indefinite detention awaiting possible deportation.

The 9th Circuit decided that immigrants who were later detained after completing their prison time - sometimes years later - could seek bond hearings to argue for their release.

In some ways Wednesday’s argument mirrored the split among the justices shown in a 5-3 February ruling, with the conservatives in the majority, that curbed the ability of immigrants held in long-term detention during deportation proceedings to argue for their release. That decision overturned another 9th Circuit ruling. 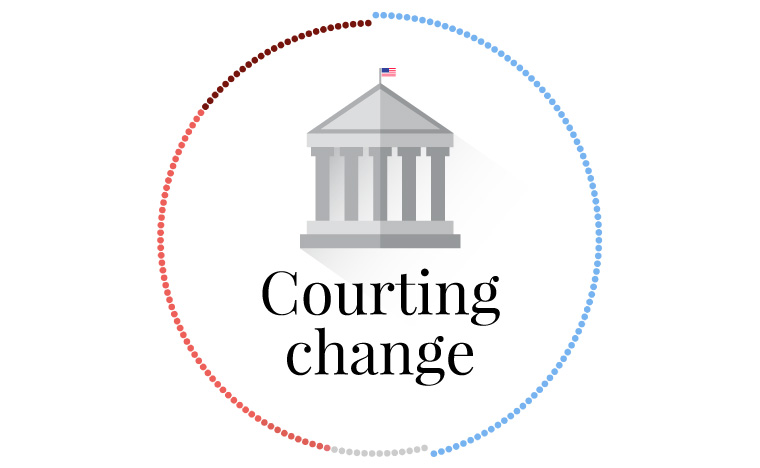 A majority of justices, including Gorsuch, appeared concerned about immigrants being detained without a hearing years after committing criminal offenses.

“Is there any limit to the government’s power?” Gorsuch asked.

The sticking point appeared to be how to define what would be a reasonable period of time for immigration authorities to detain a person whose criminal sentence is completed.

The law at issue states that the government can detain convicted immigrants “when the alien is released” from criminal detention. Civil rights lawyers for two groups of plaintiffs argued that the language of the law shows that it applies only immediately after immigrants are released. The administration said the government should have the power to detain such immigrants at any time.

“I don’t know what is reasonable in this situation. A month?” Roberts asked.

In questioning Wang, Kavanaugh said the ACLU’s request for a time limit “raises a real question for me whether we should be superimposing a time limit into the statute when Congress, at least as I read it, did not itself do so.”

But Kavanaugh later asked administration lawyer Zachary Tripp what a reasonable amount of time would be if the court sided with the immigrants. Tripp called any time limit “profoundly problematic.”

The ACLU, which often argues cases before the justices, had urged the Senate to reject Kavanaugh after he was accused by three women of sexual misconduct. He denied the allegations.

A ruling is due by the end of June.

Reporting by Lawrence Hurley; Editing by Will Dunham