NEW YORK (Reuters) - The U.S. presidential election may turn out to be one of the world’s biggest un-popularity contests.

Nearly half of American voters who support either Democrat Hillary Clinton or Republican Donald Trump for the White House said they will mainly be trying to block the other side from winning, according to a Reuters/Ipsos poll released Thursday.

The results reflect a deepening ideological divide in the United States, where people are becoming increasingly fearful of the opposing party, a feeling worsened by the likely matchup between the New York real estate tycoon and the former first lady, said Larry Sabato, director of the University of Virginia’s Center for Politics.

“This phenomenon is called negative partisanship,” Sabato said. “If we were trying to maximize the effect, we couldn’t have found better nominees than Trump and Clinton.”

Trump has won passionate supporters and vitriolic detractors for his blunt talk and hardline proposals, including his call for a ban on Muslims entering the United States, his vow to force Mexico to pay for a border wall, and his promise to renegotiate international trade deals. 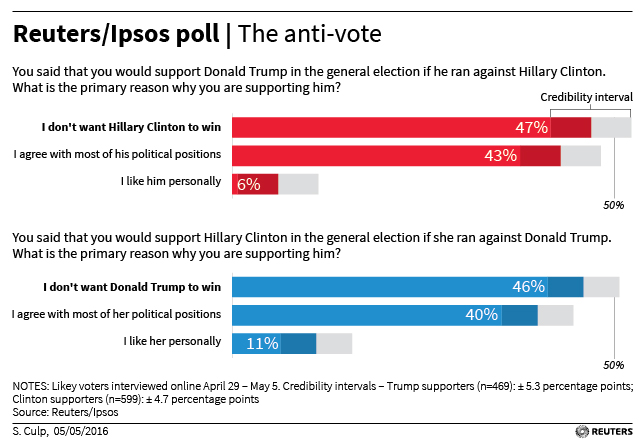 Selection for president, if the 2016 presidential election was between Donald Trump and Hillary Clinton
Poll

Former Secretary of State Clinton’s appeal to voters seeking continuity with President Barack Obama’s policies, has won her a decisive lead in the race for the Democratic presidential nomination, but finds strong opponents among those disillusioned by what they see as lack of progress during Obama’s tenure.

The poll asked likely voters about the primary motivation driving their support of either Trump or Clinton heading into the general election on Nov. 8.

About 47 percent of Trump supporters said they backed him primarily because they don’t want Clinton to win. Another 43 percent said their primary motivation was a liking for Trump’s political positions, while 6 percent said they liked him personally.

The April 29-May 5 poll included 469 likely Trump voters and 599 likely Clinton voters. It has a credibility interval of 5 percentage points. (For results, click tmsnrt.rs/1TLCbqX)

To be sure, voters’ opinions could change over the next several months. Candidates will be feted at party conventions, will square off in a series of national debates, and will be targeted by millions of dollars worth of advertisements.

But the negative atmosphere is likely to reign, says Alan Abramowitz, an Emory University professor who has studied the rise of negative partisanship in America.

Both campaigns probably will decide their best strategy is to work even harder to vilify each other, he said.

“It’s going to get very, very negative,” he added.

That would play into a longer-term trend.

A 2014 study by Pew Research Center found that Democrats and Republicans have shown increasingly negative views toward each other over the past few decades. In 2014 more than a quarter of Democrats, and more than a third of Republicans, viewed the opposition as “a threat to the nation’s well-being.”

Barbara Monson, 59, a Republican from Murray, Utah, is among them. “No matter who the Republican (nominee) is, I would have voted for him,” poll respondent Monson said of her support for Trump. “It’s never going to be Clinton. Never.”

Jo-Anne Michaud, 69, an independent voter from Abingdon, Maryland, told Reuters she would try to keep an open mind. Although she has voted for both Republicans and Democrats in the past, she feels repelled by Trump.

“I used to like the guy when I watched his show,” Michaud said. “But I just hate the way he talks now. I don’t think he’s a nice person deep down inside.”