Commentary: Why so many red states are turning blue

The gender gap is old news. This is the year of the education gap.

Education is now a key political marker. It defines the line between the Old America (less well educated) and the New America (voters who have college degrees).

Differences by education are not new in American politics. We’ve seen a pattern developing since the 1960s. The higher your income, the more likely you are to vote Republican. The best educated, though, tend to vote Democratic.

In 2012, GOP nominee Mitt Romney was the prince of wealth and President Barack Obama was the prince of education. They represented two intensely competitive elites that have been at war for decades. Both attended Harvard University, which is in the business of producing elites.

Democrats have been worrying about their party’s weakness with working-class whites. But working-class whites are not nearly as dominant as they used to be. Non-college whites were 65 percent of all voters in 1980, 54 percent in 1988 and 36 percent in 2012. This year, it’s Republicans who have the far bigger problem.

Democrats are now making serious gains among the well-educated. Trump drives away college-educated whites who used to be reliably Republican. This year, for the first time, they are going for the Democrat.

It’s changing the nation’s electoral map. Republican losses among educated voters are tipping many states from red to blue.

States that used to be reliably Republican — Arizona, Georgia, North Carolina — are becoming competitive. Former swing states such as Colorado and Virginia, now look like sure bets for Clinton.

Two things are happening. First, we’re seeing a flight from Trump among well-educated suburban white voters in major metropolitan areas like Denver, Philadelphia and Atlanta. The well-educated northern Virginia suburbs of Washington, D.C., have pulled that state into the Democratic column. Virginia today can be described as two thirds Southern and one third New Jersey.

Many of those states are also seeing increasing numbers of minority voters, particularly Latinos, who are certain to vote solidly against Trump.

Trump, meanwhile, is competitive in states with a lot of blue-collar whites, rural voters and relatively small minority populations, like Ohio and Iowa. The Washington Post just polled all 50 states. Trump is getting an absolute majority of the vote in six states: Alabama, Kentucky, North Dakota, Tennessee, West Virginia and Wyoming.

Where does Trump do best? Appalachia, where there are a lot of low-education white voters. Take West Virginia, one of the poorest (and whitest) states in the country. It’s a coal mining state and it used to vote solid New Deal Democrat. It even voted for Massachusetts Governor Michael Dukakis in 1988! 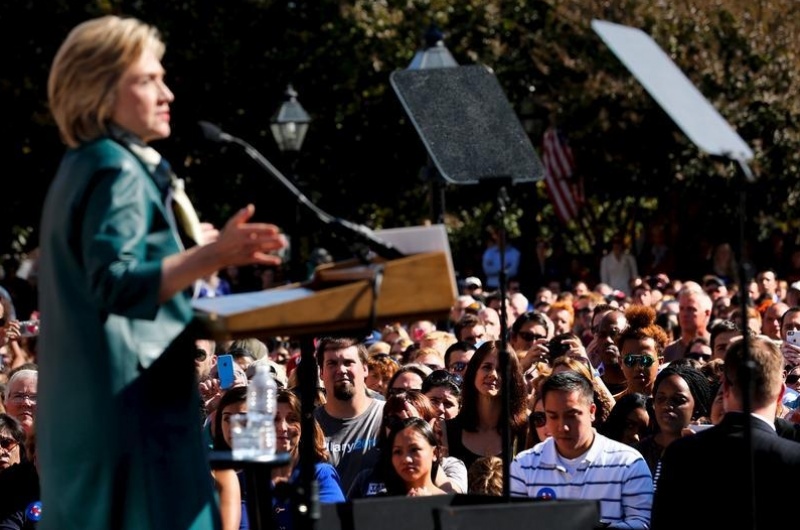 Now look at Virginia. Virginia voted Republican in 13 out of 14 presidential elections from 1952 to 2004 (all but 1964). Yet Virginia voted for Obama twice, and this year it looks safe for Clinton. Virginia voters are one-quarter minority, and a majority has college degrees.

What explains the widening of the education gap? You might argue that Trump is notoriously ill-informed and that turns off educated voters. He is skeptical of climate change, for example, as are a lot of poorly educated Americans.

But the diversity factor may be more important. What defines Democrats today is a commitment to diversity and inclusion — the first African-American president, possibly the first female president.

Trump, meanwhile, has been called the candidate of white identity politics. He leads the resistance movement against diversity and inclusion, which he contemptuously labels “political correctness.”

Younger, better-educated Americans tend to live in major metropolitan areas that are increasingly diverse. White, working-class Americans have been fleeing those areas. Some because they can’t afford to live there, others because they want a different lifestyle.

In 2014, Andrew Levison wrote in the New Republic, “Today, two-thirds of white workers live in small towns, the urban fringes around metropolitan areas or rural areas; only a third remain in central cities or suburbs.”

Way back in 1896, Democrats nominated the whole populist package: William Jennings Bryan, an economic radical, religious fundamentalist and foreign policy isolationist. Bryan’s candidacy turned off cosmopolitan America. He did well in rural America and the South, but lost the fast-growing, urbanizing and industrializing states that were attracting immigrants. Democrats nominated Bryan three times (1896, 1900 and 1908). Each time he did worse. Democrats became the nation’s minority party for 36 years.

Clinton’s health problems could become a new source of division.  A lot of poorly educated voters are receptive to conspiracy theories, like the view that the Clinton campaign is hiding crucial information about the candidate’s real state of health. They saw something dire in her abrupt exit on Sunday from the 9/11 anniversary ceremony in New York City, although her campaign announced that the former secretary of state had been diagnosed with pneumonia on Friday.

Clinton spoke for educated cosmopolitans this week when she put “half of Donald Trump’s supporters” into a “basket of deplorables” calling them “racist, sexist, homophobic, xenophobic, Islamophobic.” The Trump campaign denounced her “contempt for everyday Americans.”

Trump’s message: She’s a snob. Out of touch with — and disdainful of — ordinary Americans.

Bill Schneider is a professor at the Schar School of Policy and Government at George Mason University. He is a visiting professor in the Communication Studies Department at the University of California – Los Angeles.