WASHINGTON (Reuters) - The U.S. prison population fell the most in almost four decades to 1.53 million inmates in 2015, resulting in the lowest rate of incarceration in a generation, the Department of Justice said on Thursday.

The drop has been driven by changes in federal and state corrections policies that include drug treatment programs and the sentencing of fewer nonviolent drug offenders to federal prisons, the department said in its year-end report on prison populations. 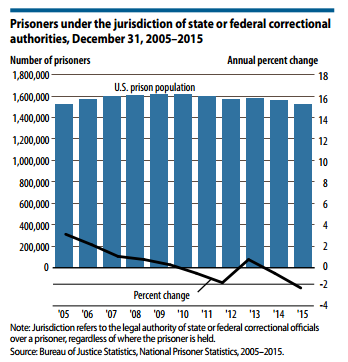 Roughly one in 37 U.S. adults was under some form of correctional supervision at the end of 2015, the lowest rate since 1994.

At the end of last year, there were 458 prisoners sentenced to more than a year in state or federal prison for every 100,000 U.S. residents. That number was the lowest since 1997, when it was 444, the report said.

Forty percent of the decline in the U.S. prison population was among federal inmates, whose numbers fell more than 7 percent to 196,500, marking a third straight year of declines.

The Justice Department’s one-time early release of about 6,000 nonviolent drug offenders in late 2015 accounted for much of the federal drop. President Barack Obama also has shortened the sentences of 1,176 federal inmates, including 153 last week.

In state prisons, the number of inmates decreased by almost 2 percent to 1.33 million from 2014 to 2015, and 29 states showed a drop in the number of their prisoners.

With the drop last year, the number of state and federal inmates has declined about 6 percent since peaking in 2009 but is still well above the level of 300,000 in 1978, the oldest data provided in the report.

On an average day in 2015, an estimated 721,300 inmates also were being held in city or county jails, where prisoners normally are housed ahead of trial.

When people on probation or parole were added to the prison and jail populations, an estimated 6.74 million people were under the supervision of U.S. adult correctional systems at the end of last year, the report said.