The number of hate and bias incidents reported across the United States spiked in the 10 days following Donald Trump's presidential election victory, according a report released on Tuesday by a civil rights advocacy group.

The report, by the Southern Poverty Law Center, documents 867 incidents ranging from assaults to threatening graffiti messages, based on incidents reported to the group or by news media. 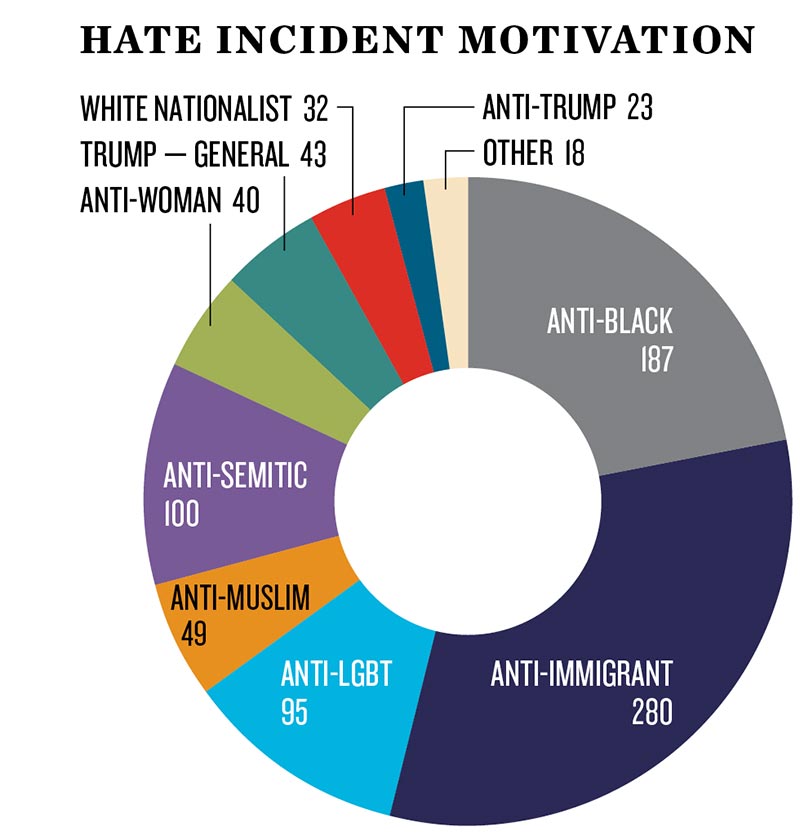 That is a major increase from the normal rate of hate incidents reported in the United States, said Richard Cohen, the group’s president.

“What we’re seeing is something quite unusual. People are reporting seeing swastikas painted in neighborhoods that they’ve lived in for 20 years. We’ve never seen anything like it,” said Cohen, who has tracked hate groups for three decades.

The incidents included numerous cases of people threatening apparent immigrants with deportation and vandalism deriding black Americans, many of which cited Trump’s victory.

They followed an historic presidential campaign in which the New York real estate developer vowed to build a wall along the U.S.-Mexico border, promised to deport millions of unregistered immigrants and mulled restricting Muslim immigration.

Since his victory, Trump has said he rejects acts of violence or harassment, and disavowed the so-called “alt-right” white nationalist movement, which has been a vocal supporter of the president-elect.

Cohen called on the Republican to do more.

“What we’d like to see Mr. Trump do is acknowledge that his own words have fueled the outbreak of hate that we’re seeing. He needs to take responsibility and stop pretending he’s surprised,” Cohen said in a phone interview. “He needs to speak forcefully and repeatedly against bigotry.”

A spokeswoman for Trump’s transition office did not immediately respond to a request for comment.

Trump campaigned on a populist platform summed up in his “Make America Great Again” slogan and has vowed to be a more forceful advocate for the U.S. middle class in his negotiations on trade, security and other international issues than his predecessors.

The report found that close to one-third of the incidents that followed the Nov. 8 election represented anti-immigrant sentiments while about one in five were anti-black. Others targeted included lesbian, gay, bisexual and transgender people, Muslims, Jews and women, while 23 incidents reflected anti-Trump feelings.

It cautioned that it was not able to verify the authenticity of each of the claims but said it had excluded those that had been disputed by authorities or the news media.