Factbox: 70 years of the 'special relationship' between the United States and Britain

May, the first foreign leader to visit Trump, aims to forge closer ties with the United States as Britain leaves the European Union. She hopes to enjoy the same closeness with him that Margaret Thatcher had with Ronald Reagan in the 1980s.

“Unquestionably, this relationship has assumed way more importance than it might have had even a year ago,” said John Bew, a history and foreign policy professor at King’s College London. “Anglo-American relations are back in town in a big way.”

The history of the special relationship between the two countries has always been defined by personalities, Europe and security issues and has not always been easy. 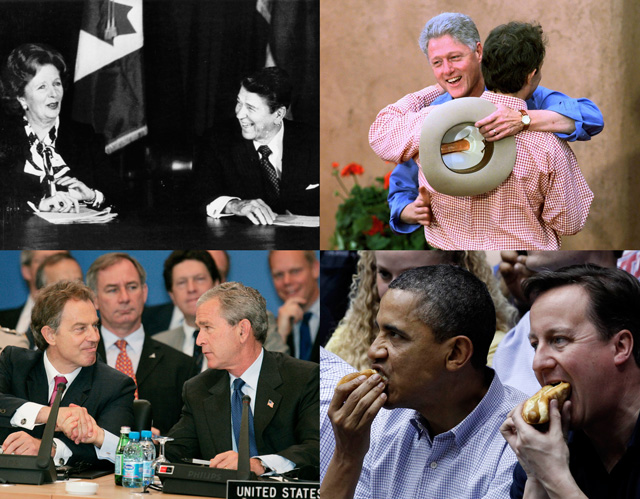 GALLERY: HISTORY OF A SPECIAL RELATIONSHIP

FROM CHURCHILL TO CRISIS

The United States declared independence from Britain in 1776 but it was not until 1946 that Winston Churchill coined the term “special relationship” following World War Two.

The establishment of NATO in 1949 helped to deepen military ties but the alliance saw challenges in the early years of the Cold War.

The episode was arguably the worst crisis of U.S.-UK relations in the 20th century but demonstrated to the British establishment its fading imperial power and the importance of collaboration with the United States in international affairs.

The relationship was tested again in 1962 when the administration of U.S. President John Kennedy unexpectedly canceled its Skybolt missile program, angering Britain, which had been set to use the missiles.

But, as with Suez, the resolution of the crisis deepened ties between the countries and contributed to the decision of France to block Britain’s accession into the European Community in the early 1960s.

The defining image of British and U.S. relations by the end of the Cold War was of Prime Minister Margaret Thatcher and President Ronald Reagan.

The grocers’ daughter and the Hollywood film star struck up a rapport on the basis of their shared commitment to small government, economic liberalism and anti-communism.

Even this relationship was subjected to strains, however. Thatcher was angered by the U.S. invasion of Grenada, a Commonwealth nation in 1983. In 2014 a recording of a phone call by Reagan, apologizing to Thatcher, was released.

The special relationship was reinforced again with the co-operation of Prime Minister Tony Blair and President George W. Bush over the Iraq War.

Following the 9/11 attacks on the United States, Blair was keen to offer support to the United States. However, while the initial military action to depose Saddam Hussein as Iraq’s leader in 2003 achieved its aims, the war became drawn out.

The lack of weapons of mass destruction, which had provided a justification for the action, drew opposition on both sides of the Atlantic, with some describing Blair as a puppet of Bush.

While Blair’s close friendship with Bush - they famously shared their toothpaste - became a political issue for him, British leaders tended to see good relations with president Barack Obama as an asset.

Obama was popular in Britain and Prime Minister David Cameron was keen to portray their closeness, in contrast to the more awkward manner of his predecessor Gordon Brown.

Cameron high-fived Obama as they played table tennis during a visit to London in 2011, while Cameron ate hotdogs with the president as they took in a university basketball game in Ohio.

However, Obama’s comment in April 2016 that Britain would be “at the back of the queue” in trade talks should it vote to leave the EU also raised questions among Britons about the value of the relationship.

Tom Packer, research fellow at the Rothermere American Institute in Oxford University, believes that the pragmatic relationship of Bush and Blair may be a better guide to May and Trump’s relationship than Reagan and Thatcher.

“I think it can’t be like Ronald Reagan and Margaret Thatcher, because they shared an ideological vision, and also had important personal ties already,” Packer said.

“It could conceivably be like Bush and Blair, where people who share common objectives slowly become personally and in some ways ideologically close.”