Mother of all battles in scarcity-hit Venezuela: having a baby

Pregnant women wait for their turn to be attended at a maternity hospital in Maracaibo, Venezuela June 17, 2015. REUTERS/Isaac Urrutia

“I’m giving birth tomorrow and here I am in the street. I want to go home,” says the teacher, 37, fanning herself as she rests on a bench the day before her scheduled delivery.

Over the previous nine months, Angarita’s life has been consumed with searching for vitamins, calcium, diapers and medicines amid widespread shortages in recession-hit Venezuela.

Currency controls and flailing local production have fueled worsening scarcities that are now a blight of daily life for many Venezuelans - especially those expecting a child.

The shortages are compounded in places like Maracaibo, a western city near Colombia. Many here offset inflation and a depreciating currency by selling price-controlled goods across the border or on the local black market, leaving less on shelves.

To get by, pregnant women wake up at the crack of dawn to join long store lines, try to stock up on diapers before their baby is born, visit a dozen shops for a single product, tap social media to barter goods, and spend small fortunes on the black market where smugglers jack up prices at the sight of their bellies. 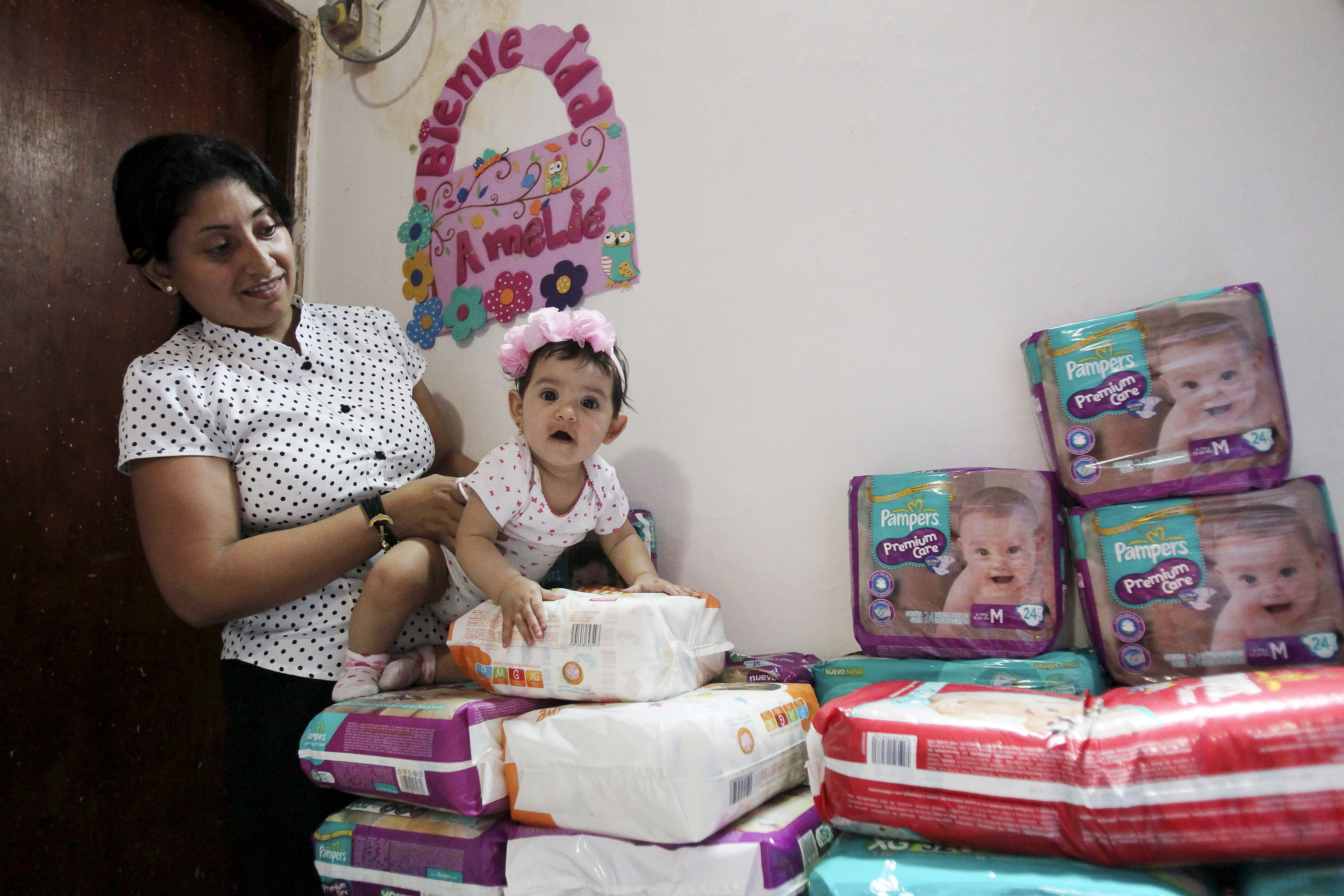 Or they simply go without.

“Everything is an obstacle,” says Angarita, who now regrets voting for late socialist president Hugo Chavez.

More worryingly, shortages in the health sector pose an increased risk of complications during pregnancy, according to doctors and rights group.

Maternity and pediatric units “are overcrowded, there aren’t enough incubators, water is lacking and power cuts are normal, equipment is damaged, there aren’t surgical supplies and blood banks don’t work,” said a joint report by local activist groups Codevida and Provea in May.

Deteriorating hospitals are at times forced to turn away patients due to lack of everything from antibiotics to doctors, who have joined an exodus of professionals leaving Venezuela amid a bruising economic crisis and epidemic of violent crime.

Drawing a full picture of the effect of scarcity on pregnancy is tricky due to a lack of up-to-date official data.

During his 14 years in power, Chavez tapped an oil bonanza to build thousands of free health centers in poor neighborhoods, largely staffed by Cuban doctors, and create maternity-focused programs like the “Baby Jesus Mission.”

But many relevant indicators have not been published since shortages worsened, and many Venezuelans say the health sector is in an abysmal state.

The last available health ministry figures for infant mortality under 1 show an increase of 2.35 percent from January to October last year compared with the same period of 2013.

Venezuela’s government did not respond to requests for comment and the National Institute for Women said it was not currently authorized to give interviews. A spokesperson for UNICEF in Venezuela said she could not comment because of lack of data.

President Nicolas Maduro, Chavez’s handpicked successor, blames the shortages on speculators who he says hoard medicines and other goods to stoke anger against his government.

He also says his government remains committed to social spending despite a recent tumble in oil prices.

“Even if oil falls to $0, our children have everything guaranteed for them, their access to health care, education, everything,” he said from behind a medical mask as he cooed over newborns during a recent visit to a pediatric hospital.

By 8 a.m., over 100 pregnant women line the corridors of a state-run maternity center in Maracaibo. Portraits of Chavez and 19th century liberation hero Simon Bolivar hang above them.

Staff will eventually see them in rooms that can reach around 35 degrees Celsius (95 Fahrenheit) because of insufficient spare parts to repair air conditioning units.

Doctors say the temperatures are a breeding ground for bacteria. Basics like sheets and toilet paper are often unavailable because of theft. 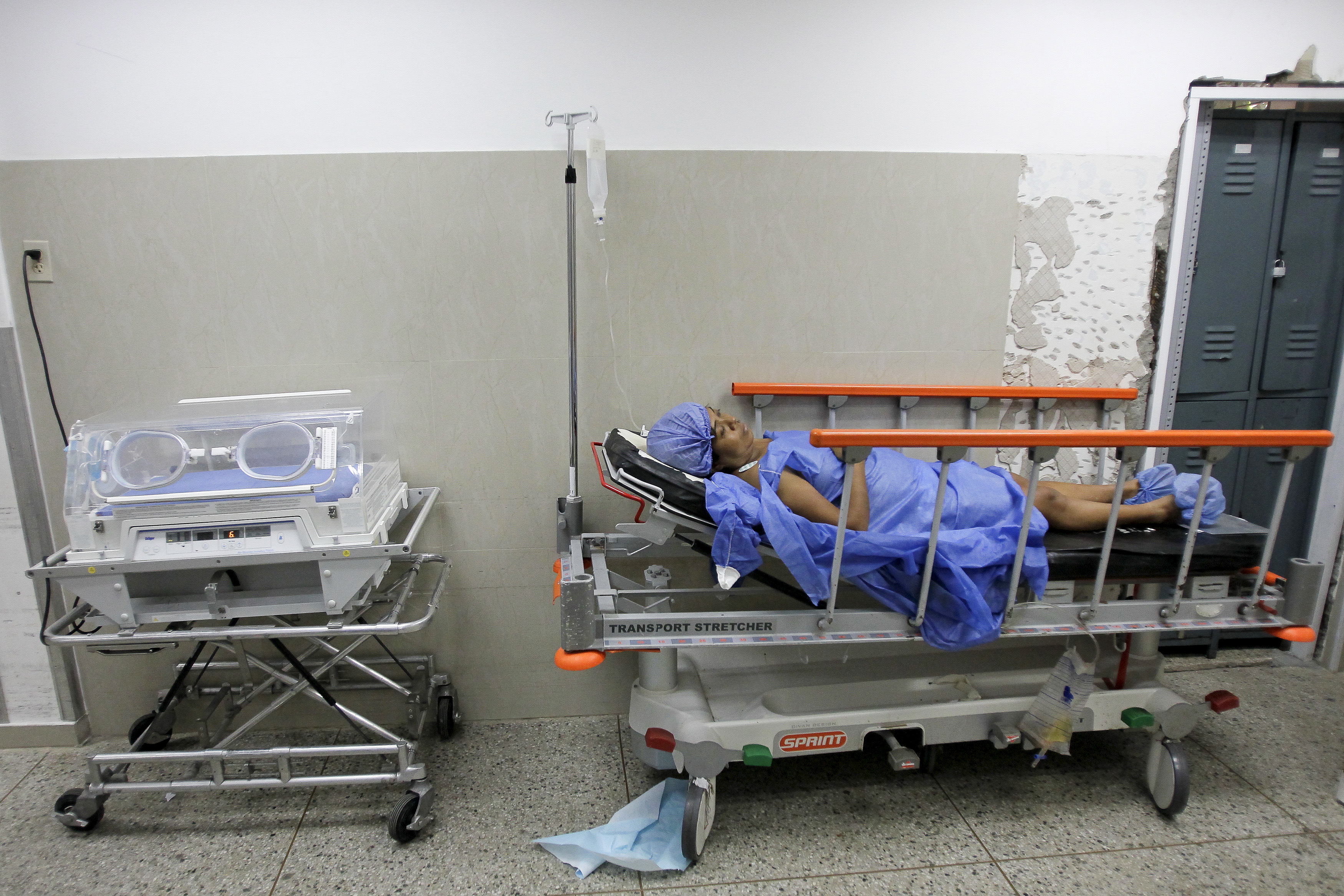 Three patients with high-risk pregnancies receiving oxygen through tubes almost died of choking this year due to a shortage of suction catheters, said a doctor in the intensive care unit.

“The crisis gets worse by the day because every day the shortages grow,” said an obstetrician in between examining patients in her small office, asking to remain anonymous.

“I bring gloves, catheters, and gauzes in from abroad. During the day, patients look for supplies wherever they can but at night it’s dangerous,” added the doctor, who says she too is thinking about leaving Venezuela.

About 7 in 10 drugs are currently unavailable, estimates the Pharmaceutical Federation of Venezuela.

Venezuela’s Childcare and Pediatrics Society says chickenpox vaccines are scarce, those for polio and hepatitis are intermittently available, and babies are at risk of being born underweight due to lack of vitamins and supplements.

While many in Venezuela appear resigned to the shortages, small pockets of society are protesting.

“It’s because we’re scared and because we’ve stayed at home silently that we’ve ended up in this situation,” said Patricia Fernandez, 27, a mother of twins who joined a march last month to demand solutions for shortages of diapers, baby formula and milk.

She and her taxi driver husband, who installs security cameras to supplement earnings, spend a quarter of their monthly income on diapers and milk alone.

“How long will this go on for? I can’t get used to them limiting what I can get for my children,” said Fernandez.

On a recent hot morning in Cabimas, a poor town near Maracaibo, hopeful shoppers flanked by National Guard officers yelling instructions waited in a parking lot hoping a truck with goods - perhaps shampoo or diapers - would pull up eventually.

Shoppers complain that re-sellers grab the first spots in lines and threaten people who argue with them. Given the high rate of single-parent homes, some mothers have little choice but queue with their kids.

“I wouldn’t have another child. In this situation, don’t have children.”

Some are indeed putting off having a child, although shortages of birth control options can thwart planning in a country where abortion is illegal unless the woman’s life is at risk.

Yasira Sara, a stay-at-home mother of four, said she fell pregnant because she could no longer find contraceptive pills. Condoms are also scarce.

“The news was awful - and then I found out there were two of them!” said Sara, 32, after a check-up, adding she had not been able to find a kit for her cesarean, which many women in Venezuela opt for.