Fintech firms raised $5.19 billion from 251 deals in the three months ending in June, up from $3.75 billion a year earlier, according to the report published on Tuesday.

It was the highest quarter on record by amount raised, CB Insights said.

Volumes were boosted by several large deals, including a $300 million investment in North Carolina-based invoicing company AvidXchange and a $107 million round in New York-based blockchain company R3, the report said.

Moreover, there were 18 deals that raised more than $50 million in the second quarter, compared to 11 in the same quarter last year.

Many of these large rounds were in the United States, which had experienced a dip in investments in the first three months of the year. Fintech funding dropped in Europe the second quarter, but soared in Asia largely driven by Softbank’s $1.4 billion investment in One97, the parent company of India-based payments firm Paytm.

CB Insights predicts investments in VC-backed fintech companies could rise 19 percent from 2016 this year if the deal pace is sustained. 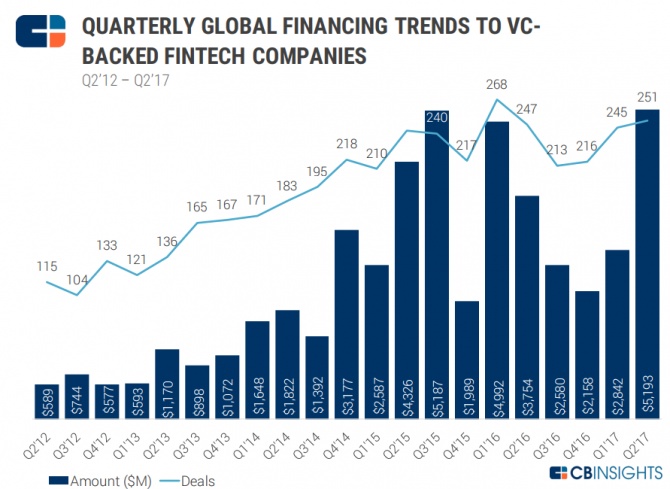