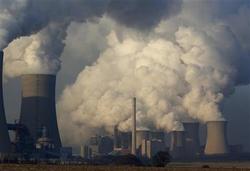 By Henning Gloystein and Jeff Coelho

The EU's carbon scheme, its main tool to fight global warming, caps CO2 emissions on around 12,000 industrial and power plants in 30 countries and requires them to purchase permits to exceed those caps.

The supply of permits has increased, however, to the equivalent of several hundred million tons of emissions due largely to slowing industrial output. Preliminary EU data suggests emissions in the capped market fell just over 2 percent last year.

Prices have slumped accordingly. Polluters currently pay around 7 euros ($9.13) per ton of CO2 emitted, down 60 percent from the same time last year.

The low costs of being allowed to pump carbon into the atmosphere mean that utilities have leeway to burn more coal.

At the same time, profits based on benchmark German prices for electricity generated by coal-fired plants have risen by around 30 percent since the beginning of the year to their highest levels since 2008 and could lead to a 13.5 percent year-on-year jump in German hard-coal power production, Reuters research shows.

"If you have anything that's coal-fired in your generation park at the moment - be it lignite or hard coal - you will take advantage of the high margins and burn the stuff," a trader with a major German utility said.

Utilities in Germany, Europe's biggest power market and economy, have constantly increased their use of coal-fired plants since the beginning of the year.

Between January and May, German midday hard-coal and lignite power generation rose from 53 percent to 68 percent of the nuclear and fossil power generation share, according to data from Leipzig-based European Energy Exchange (EEX).

Britain, which has over 12 million tons of coal in inventories, is now running coal plants at capacity while carbon permits are cheap and gas is expensive, but how long this lasts will depend on the weather, according to Nigel Yaxley of the UK Coal Importers Association.

This would mean that coal's share of power generation continues its rise but that the drop industrial activity results in falling overall UK coal consumption.

"Demand for coal in 2010 was 51 million tons, a 5 percent increase on 2009, which was the lowest on record," Britain's Department of Energy and Climate Change said, adding that coal's share in power generation had risen from 27 to 28 percent between 2009 and 2010.

"These statistics allow us to burn as much coal as we want to without actually raising UK emissions, but in the longer-term it sends out the wrong signal and will mean rising emissions once the economy bounces back," a power trader in London said.

Coal-fired generation has been strong through the winter and so far into 2012 in Germany, Britain, Italy and the Iberian peninsula, because high gas prices have made coal the most cost-effective fossil fuel for baseload power.

The slide in coal prices during the past month - delivered Europe prices per ton dropped from $120 in October to $86-$88 this week - has helped maintain coal's cost advantage.

Usually there is a seasonal slump in coal generation in the spring and summer months before it picks up again in the autumn, but this pattern may not occur this year in these countries if coal keeps its edge.

Whether it does will depend almost entirely on the degree to which China and India absorb the surplus of thermal coal supply in the global market in the second half of the year.

But low carbon prices are also giving generators no incentive to switch to cleaner fossil fuels, such as gas.

European officials and lawmakers are reviewing how to deal with the supply problem and prop up prices, with a possible removal of permits over the 2013-2020 period.

Reuters data shows that carbon prices would have to rise to over 30 euros per ton in order to push utilities into switching from coal to gas.

If the high coal margins persist, Reuters research shows that Germany could produce almost 130 terawatt-hours (TWh) of electricity from hard coal in 2012, up from 114.5 TWh last year.

"Adding up 15.5 TWh burning hard coal means a raise in emissions of around 14 million tons," said Matteo Mazzoni, an energy and carbon analyst at Nomisma Energia.

But Mazzoni said that despite the increase, the overall impact on emissions would not be too big, given Europe's lagging economy.

"You need to take into account the overall level of power generated, and for 2012 we see a 1.8 percent drop in German power generation. That means something like 10 TWh less than 2011," he said, adding that the resulting net increase of 5 million tons was "not such a big deal at current conditions".

Mazzoni said the same was likely for other European countries, notably Spain and Portugal, whose economies have been hit hard by the sovereign debt crisis.

Portugal's coal burn is likely to be 1.5-1.6 million tons this year, a slight rise from 2011, according to Carbopego.

Barclays Capital said in a research note that stronger seasonal winds and longer, sunnier days would help wind and solar power generation take a larger share from coal burn in the summer.

EEX data shows that the higher share of renewables expected in the summer is likely to result in a slight drop in coal burned but that its burn rate was expected to rise again with the beginning of the autumn.

The European Union has set a target to cut overall emissions by 20 percent by 2020 from 1990 levels. Emissions last year were already down 17 percent, and increased energy efficiency should mean the EU can achieve a 25 percent reduction by 2020, the European Commission has said. ($1 = 0.7663 euros)

(Additional reporting by Jacqueline Cowhig in London and Vera Eckert in Frankfurt, editing by Jane Baird)