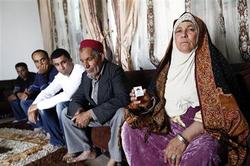 BEN GUERDANE, Tunisia (Reuters) - The first that Tunisian schoolteacher Mokhtar Mars heard of his brother fighting alongside rebels in Syria was a phone call from a foreign number, telling him Houssein was dead.

"We got an anonymous call telling us he had been martyred. Just three words. We tried to call back but there was no answer," said Mars, 40, sitting on a mattress along a wall of what was his younger brother's room, bereft of other belongings.

"The last call we got from him in February was from Libya. He said he was there to study ... Then all contact was broken. We tried to call the number he used but there was no answer."

Houssein Mars, 34, is one of at least five Tunisians, all from the southeastern town of Ben Guerdane on the border with Libya, who are believed to have been killed in Syria. Two of their families agreed to be interviewed, as did the family of a sixth man, from the same town, whose fate is not known.

Though the families have seen no corpses or proof of the deaths, a video carrying the black flag of al Qaeda has appeared on Facebook eulogizing the five men to a backdrop of Koranic verses and stating they had been killed in Homs, which has seen some of the worst bombardment by Bashar al-Assad's forces.

Syria's envoy to the United Nations says 26 Arab fighters have been captured and "confessed" to al Qaeda sympathies. Another envoy to the U.N. said 19 of those 26 were Tunisians.

Foreign Islamist fighters appear to be a fringe element only in the conflict between assorted Syrian rebel groups and Assad's armed forces. But the fate of this one band of Tunisian friends offers some of the hardest evidence yet that Syria could become a magnet for the kind of young Muslim men from around the world who once sought jihad and martyrdom in Iraq or Afghanistan.

At least one young man in Ben Guerdane told Reuters he was himself ready to go and fight in Syria.

The Tunisians' families say they were simply devout Sunni Muslims anguished by images of civilians suffering at the hands of forces dominated by Assad's minority Alawites, whom many Arabs see as waging sectarian war on Syria's Sunni majority.

"What we see on television cannot make any Muslim happy ... An army killing its people. No one can accept this," said Mokhtar Mars, adding that because his brother and others wore beards and prayed often did not make them militant Islamists.

"There are bearded, religious people but that does not mean they are extremists," he added. " If you saw these boys you would be surprised if they killed a fly."

The Syrian list of captured fighters suggests men from all over Tunisia have gone to fight in Syria. However, the Facebook video eulogizing the dead quotes Abu Musab al-Zarqawi, the late Jordanian leader of al Qaeda in Iraq, praising the bravery of men from Ben Guerdane in particular. That suggests the town had a history of sending volunteers to the Iraqi conflict too.

Residents of Ben Guerdane, which lives off trade and smuggling with Libya and where outward displays of religious fervor have spread since last year's Tunisian revolt ousted secular leader Zine al-Abidine Ben Ali, say more youths may have quietly slipped away to join rebels fighting to overthrow Assad.

"There are some youths who are going to Syria via Ben Guerdane. They are religious. We think they are from Salafi Islamist currents but it is not certain," said a security source in the town. "What we know is that more than 10 left from here."

Syria's government has from the outset sought to paint the uprising as a plot by foreign fighters and al Qaeda militants. It points to Thursday's twin suicide bombings which killed 55 people in Damascus as evidence that it is fighting "terrorism".

That call coincided with reports from Iraq that fighters and arms were seeping into Syria, fuelling violence in a country that once sent guns and militants the other way.

Russia, which is Assad's main arms supplier and defender, said in March he was fighting al Qaeda-backed "terrorists" including at least 15,000 foreign fighters and accused Libya of running a training centre for rebels.

Libya's prime minister has said he was unaware of any camps, and Syrian opposition members, keen to rally Syria's minorities to a revolt led largely by the Sunni Arab majority, are at pains to distance themselves from militant links.

"I have received offers from Arabs and foreigners to send us fighters but we said 'no'. We have fighters. We need guns. There is no al Qaeda here or any such group. It is all lies," said Lieutenant Colonel Khaled Hammoud, a commander of the opposition Free Syrian Army, speaking by telephone from the Turkish border.

"We don't want to give the regime an excuse to accuse us of bringing in foreign fighters."

Whether or not they are working with Syrian rebels, however, as the violence drags on foreign fighters may take advantage of the chaos, further complicating the conflict.

"Foreign volunteers are part of the picture and that was virtually inevitable given the context: growing chaos across the country, a political conflict with sectarian undertones, and extreme forms of violence leading to some radicalization," said Peter Harling, Syria analyst at the International Crisis Group.

"But jihadis generally are still a sideshow. In a sense it is surprising that relatively few bomb attacks of the kind they may engage in have occurred."

The families of the men from Ben Guerdane say they were devout Sunni Muslims who spent much time in prayer.

At least two of them, including Houssein Mars, had spent time in jail under the ousted president Ben Ali charged with alleged links to Islamist radicals, their families say.

At least one, 26-year-old Mohammed Lafi, was jailed after trying, and failing, to slip into Iraq via Syria, his family says. He then went to Algeria, where he was arrested and sent back to Tunisia. Jailed for three years, he was freed in 2010.

The men had spoken to relatives about their desire for jihad, or holy war, and to die as martyrs but had said nothing specific, it seems, before making their way to Syria.

Walid Hilal has been missing since February 24, when he told his family he was going to the capital for a kung fu tournament. The 21-year-old had taken up the sport a year before and appears mid-kick in the Facebook eulogy, in a red martial arts outfit.

"My son is a martyr. He did nothing wrong and I'm not worried about him," said his mother Mabrouka, sitting beside her husband and other sons on a couch. "He used to say 'I'll go to jihad and you mustn't cry' but I didn't take him seriously."

Walid's mobile phone has been off since he left. Like the Mars family, the Hilals received a mysterious call from a Syrian number on April 17 telling him Walid had become a "martyr".

"After two days, when he was not answering the phone, we found out his friends had gone too and their phones were off too. We realized something was happening and we heard that some of them called their parents from Turkey to say they were going to Syria, but our brother did not call," said Taher Hilal.

"All we know is he was martyred, but how and why? We have no pictures and no proof."

The families say their sons were not involved with political parties, but followed the news in Syria, where some 12,000 people are estimated to have been killed since March 2011.

"He liked to pray and fast. Since he was a child, he was into religion," Lafi's mother Masouda said, wiping away tears with a colorful headscarf. "He always wanted martyrdom."

Unlike the Hilal and Mars families, the Lafis received no mysterious phone call but their eldest son last rang his brother from a Syrian number.

For all their grief, relatives in Ben Guerdane defended the impulse that prompted their sons and brothers to head for Syria - though some said there was a less clear case for jihad there than against foreign invaders in Iraq and Afghanistan.

"If there was a real jihad, don't imagine a single Muslim would not go. If it was a jihad against Israel," said Mokhtar Mars, who also wears the beard typical of Islamist sympathizers. "But in Syria you may have to fight other Muslims."

Now, the families want help confirming the deaths but have little expectation of recovering the bodies. And even as they mourn, others in town contemplate following their sons' lead.

One man, who would speak only if he were not named, already sported the long beard and Afghan-style dress that is common among jihadist guerrillas and said he was hoping to get to Syria, even though his wife had just given birth to a daughter.

Aged about 30, the man, who knew at least one of those killed in Syria well said he was ready to follow: "I would like to go to Syria," he said. "God willing, if it works out."

(Additional reporting by Tarek Amara in Tunis and Louis Charbonneau at the United Nations, Editing by Alastair Macdonald)