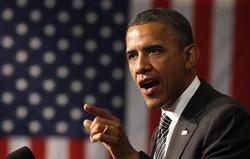 WASHINGTON (Reuters) - President Barack Obama's approval ratings have dipped to their lowest level since January on deep economic worries, wiping out most of his lead in the White House race over Republican rival Mitt Romney, a Reuters/Ipsos poll showed on Tuesday.

The percentage of Americans who approve of Obama's job performance dropped from 50 a month ago to 47, matching his mark in early January. The number who think the country is on the wrong track rose 6 percentage points in a month to 63 percent.

The doubts about Obama's leadership helped Romney pull to within 1 point of the Democratic president in the White House race - 45 percent to 44 percent - among registered voters with less than five months to go before the November 6 election. Obama led by 7 points a month ago.

The poll was mostly taken after Obama suffered several recent campaign setbacks, including a weak jobs report in May and an optimistic comment on the good health of the private sector that critics say showed he was out of touch.

The gains for Romney also came as public concern deepened over the European debt crisis and a slowing recovery created a cloud of uncertainty about the U.S. economy.

"The economy is going through a rough patch, and that more than anything is going to determine President Obama's future," said Ipsos pollster Chris Jackson. "People's unhappiness with the economy carries over pretty directly to the president's numbers, and we see those weakening."

Romney now leads Obama 46 percent to 43 percent among all registered voters on the question of which candidate would be stronger on jobs and the economy. That reversed Obama's 2 point edge on the question last month.

Romney, a former Massachusetts governor who once led a private equity firm, has made his business experience the centerpiece of his campaign and says he would be better than Obama at restoring jobs.

Obama's approval ratings took their biggest dip among independent voters, who could be crucial to the ultimate outcome of the election in November. Approval for Obama among independents fell from 48 percent to 35 percent.

"Independents are especially susceptible to economic pressures, which is why we see them bouncing all over the place in their approval of the president," Jackson said. "The finding that he is not doing that well with them this month is something for Obama to worry about."

The telephone poll, conducted Thursday through Sunday, mostly followed a rough week for Obama's campaign capped by his remarks on Friday that the private sector of the economy was "doing fine."

Obama later backtracked and said it was clear the economy was not doing fine, but Romney and other critics said the remarks were evidence Obama was out of touch with ordinary Americans.

Members of the two parties largely blame the other for the economic difficulties, with independents split on which party is most to blame.

Jackson said those numbers were a reflection of the poor overall marks for Congress, which most polls show has much worse approval ratings than Obama.

The Reuters/Ipsos survey, conducted over landlines and cell phones, had a margin of error of 3 percent for registered voters.