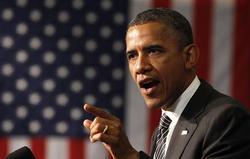 By Andy Sullivan and Caren Bohan

WASHINGTON (Reuters) - So far, President Barack Obama has not been able to convince most Americans that they are better off than they were four years ago. His next step may be to try to convince them that they would be worse off under his Republican rival, Mitt Romney.

In an economic speech on Thursday that could set the tone for months of campaigning, Obama is not likely to unveil new ideas to boost the economy and create new jobs, according to Democrats familiar with the preparations for the address.

Instead, he will make the case that he needs four more years to undo the damage left by George W. Bush, his Republican predecessor in the White House, and argue that a President Romney would bring back the weak financial regulation and budget-busting tax cuts of the Bush years.

Obama already is making this argument to small groups of supporters.

"The last thing we want to do is return to the very policies that got us into this mess," he said at a fundraiser in Baltimore on Tuesday.

The strategy carries risks for Obama.

Too much finger-pointing could diminish his presidential status and lead voters to question whether he is ducking responsibility, analysts say.

The strategy defies the widely held view among political analysts that most voters decide whether to fire or re-hire an incumbent president based on his own record. And an overly negative campaign could invite unflattering contrast with the "hope and change" motto that carried Obama to victory in 2008.

But many Democrats believe that Obama must put his achievements into context by explaining that he has spent his first term digging out from a disaster that was brought on by a Republican presidency.

They point out that the recovery hasn't been any more lackluster than those that followed recessions in 2001 and 1991; the difference is that the economy is digging out of a much deeper hole.

The 69,000 jobs added last month, while not nearly enough, should be measured against the 800,000 jobs that disappeared the month Obama took office, Democratic activists say.

"Even though 2007 was five years ago, it's very important to explain to people how we got to where we are," said Jared Bernstein, a former economic adviser to Vice President Joe Biden.

Democrats also are aware that while Romney remains largely undefined to many voters, the budget-slashing policies of the former Massachusetts governor's fellow Republicans in Congress have spooked many Americans.

Democrats also see some evidence that the Obama campaign's attacks on Romney's record as a private equity executive may be resonating with voters, despite the objections of prominent Democratic allies such as former President Bill Clinton.

A slew of weak data has led economists in recent weeks to ratchet back their expectations for U.S. economic growth. A Reuters poll published on Wednesday found economists expect the nation's Gross Domestic Product to expand at only a 2 percent annual rate in the second quarter.

Projections for hiring also have been cut. According to the poll, the economy is likely to add an average of 147,000 jobs a month between now and October, too few to make much of a dent in the nation's 8.2 percent jobless rate.

As the economic recovery threatens to stall for the third summer in a row, voters are registering deep doubts about Obama's leadership, according to a Reuters/Ipsos poll released on Tuesday. More now believe Romney would be stronger than Obama in dealing with the economy and creating jobs.

A White House news conference on Friday compounded Obama's problems when he said that the U.S. private sector is doing "just fine." The gaffe obscured his larger point that Republican-backed austerity has undercut the recovery by forcing layoffs of teachers and other public employees.

"I don't think the president, for all of his narrative gifts, which are enormous, has done a very good job up to now of integrating the economic difficulties of recent years into a broader story about the future of the American economy," said William Galston, a former adviser to Clinton.

Democrats believe that Obama already has laid out plenty of ideas for improving the economy that have been blocked by Republicans in Congress, such as spending to improve the nation's transportation network and helping local governments avoid further layoffs of teachers and firefighters.

Obama will face a near-certain loss in the November 6 election if he does not shift the campaign's storyline away from his economic track record, three Democratic strategists wrote in a memo released on Tuesday.

"We will face an impossible headwind in November if we do not move to a new narrative, one that contextualizes the recovery but, more importantly, focuses on what we will do to make a better future for the middle class," strategists Stan Greenberg, James Carville and Erica Seifert wrote.

In focus groups, voters told the three strategists that they have seen little evidence of an economic turnaround as they struggle to pay for basic necessities.

Democrats see Thursday's speech as a chance for Obama to rise above the chatter of the 24-hour news cycle and show voters how his policies will make their lives better.

"He's got to be able to talk to people in concrete terms about what his record has meant to them," said Linda Peek Schacht, who handled communications for Democratic President Jimmy Carter's failed re-election bid in 1980, when Carter lost to Ronald Reagan.

The setting for Thursday's speech should help.

Cuyahoga Community College in Cleveland has won praise for retraining programs that steer laid-off workers to new careers in biotechnology, wind power and advanced automotive manufacturing - industries that Obama frequently cites as the types of industries that will create good middle-class jobs in an era of heightened global competition.

"It's a very successful institution that's a good forum for the president's message. It's likely to appeal to voters whose support he needs," said University of Akron political science professor John Green.

Obama will be able to point to inspirational examples of people who have gone through tough times and turned their lives around, and argue that government investments in education benefit the economy as a whole.

He'll be able to say that he has called for greater funding for community colleges, and point out that Romney's fellow Republicans in Congress have passed a budget that would slash job-training funds while cutting taxes for the wealthy.

This wouldn't be a new theme for Obama - he raised similar points in an April 18 visit to another community college in nearby Elyria, Ohio.

"Right now, we have two competing visions of our future, and the choice could not be clearer," he said at Lorain County Community College. "These folks on the other side, I am sure they are patriots; I'm sure they're sincere in terms of what they say. But their theory, I believe, is wrong."