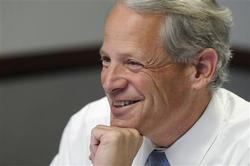 WASHINGTON (Reuters) - The man responsible for getting Democrats elected to the U.S. Congress this fall has a message for his party's candidates: Stay away from the Democratic National Convention in September.

"If they want to win an election, they need to be in their districts," New York congressman Steve Israel, chairman of the Democratic Congressional Campaign Committee, told the Reuters Washington Summit on Tuesday.

Israel emphasized that Democratic President Barack Obama's poll ratings - which have hovered around 50 percent - have little to do with his stance.

"I don't care if the president was at 122 percent favorability right now," he said. "I think (candidates) should be in their districts," rather than spend time at the convention, which will be in Charlotte, North Carolina, September 3-6.

"A trip to Charlotte may be interesting," Israel said, "but why leave your districts?"

The Democratic convention, during which Obama will formally be nominated as the Democratic presidential choice, is viewed warily by some of the party's candidates.

The gathering to fete Obama is a particularly sensitive issue for Democratic candidates who are in close races in states or districts where Obama trails Republican Mitt Romney in voter surveys.

For such candidates, four days of mingling with Democratic leaders could turn off independent voters before the November 6 election.

Israel's admonition comes as a growing list of Democrats say they will not be joining their fellow partisans in Charlotte. Missouri Senator Claire McCaskill, one of the Democratic Party's most vulnerable candidates, will not attend, an aide said.

Romney was running several points behind Obama in recent polls in Missouri, where McCaskill has trailed her potential Republican opponents.

"McCaskill's decision obviously does not change the fact that she was one of Barack Obama's earliest and staunchest supporters," said Jonathon Prouty, a spokesman for the Missouri Republican Party.

Three Democratic lawmakers from West Virginia - where a federal inmate got 41 percent of the vote against Obama in the state's Democratic presidential primary in May - have said they also will pass on Charlotte: Senator Joe Manchin, Governor Earl Ray Tomblin and U.S. Representative Nick Rahall.

Three other endangered Democrats in the U.S. House -Pennsylvania's Mark Critz, New York's Kathy Hochul and Bill Owens, also of New York - have said that they will stay away from Charlotte.

Those decisions have led some Republicans to crow that the Democrats facing difficult races are afraid to be seen near Obama.

In Montana, a state Romney is likely to win easily and where there is a competitive U.S. Senate race, Democratic Senator John Tester and his challenger, Republican Representative Denny Rehberg, will both skip their parties' conventions.

To win back the 435-member House, Democrats need a net gain of 25 seats.