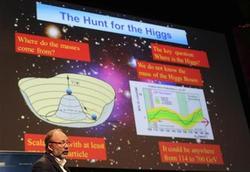 By Chris Wickham and Robert Evans

GENEVA (Reuters) - Scientists at Europe's CERN research center have found a new subatomic particle, a basic building block of the universe, which appears to be the boson imagined and named half a century ago by theoretical physicist Peter Higgs.

"We have reached a milestone in our understanding of nature," CERN director general Rolf Heuer told a gathering of scientists and the world's media near Geneva on Wednesday.

"The discovery of a particle consistent with the Higgs boson opens the way to more detailed studies, requiring larger statistics, which will pin down the new particle's properties, and is likely to shed light on other mysteries of our universe."

Two independent studies of data produced by smashing proton particles together at CERN's Large Hadron Collider produced a convergent near-certainty on the existence of the new particle.

It is unclear that it is exactly the boson Higgs foresaw, which by bestowing mass on other matter helps explain the way the universe was ordered after the chaos of Big Bang.

But addressing scientists assembled in the CERN auditorium, Heuer posed them a question: "As a layman, I would say I think we have it. Would you agree?" A roar of applause said they did.

For some, there was no doubt the Higgs boson is found: "It's the Higgs," said Jim Al-Khalili of Surrey University, a British physicist and popular broadcaster. "The announcement from CERN is even more definitive and clear-cut than most of us expected.

"Nobel prizes all round."

Higgs, now 83, from Edinburgh University was among six theorists who in the early 1960s proposed the existence of a mechanism by which matter in the universe gained mass. Higgs himself argued that if there were an invisible field responsible for the process, it must be made up of particles.

He and some of the others were at CERN to welcome news of what, to the embarrassment of many scientists, some commentators have labelled the "God particle", for its role in turning the Big Bang into an ordered universe. Clearly overwhelmed, his eyes welling up, Higgs told the symposium of fellow researchers: "It is an incredible thing that it has happened in my lifetime."

Scientists see confirmation of his theory as accelerating investigations into the still unexplained "dark matter" they believe pervades the universe and into the possibility of a fourth or more dimensions, or of parallel universes. It may help in resolving contradictions between their model of how the world works at the subatomic level and Einstein's theory of gravity.

END OF AN ERA

"It is very satisfying," Higgs told Reuters. "For me personally it's just the confirmation of something I did 48 years ago," he said of the achievement of the thousands who labored on the practical experimental work which had, finally, confirmed what he and others had described with mathematics.

"I had no expectation that I would still be alive when it happened," he said of the speed with which they found evidence.

"For physics, in one way, it is the end of an era in that it completes the Standard Model," he said of the basic theory physicists currently use to describe what they understand so far of a cosmos built from 12 fundamental particles and four forces.

CERN's Large Hadron Collider is the world's biggest and most powerful particle accelerator. Two beams of protons are fired in opposite directions around the 27-km (17-mile) looped pipe built under the Swiss-French border before smashing into each other.

The collisions, which mimic the moments just after the Big Bang, throw off debris signals picked up by a vast complex of detectors and the data is examined by banks of computers.

The two separate CERN teams worked independently through that data, hunting for tiny divergences which might betray the existence of the new boson, a class of particle that includes the photon, associated with light. The class is named in honor of Albert Einstein's Indian collaborator Satyendra Nath Bose.

Both teams found strong signals of the new particle at around 125 to 126 gigaelectron volts (GeV) - a unit of mass-energy. That makes it some 130-140 times heavier than a proton.

Scientists struggling to explain the theory have likened Higgs particles to a throng of paparazzi photographers; the greater the "celebrity" of a passing particle, the more the Higgs bosons get in its way and slow it down, imparting it mass; but a particle such as a photon of light is of no interest to the paparazzi and passes through easily - a photon has no mass.

Presenting the results, Joe Incandela at CERN showed off two peaks on a graph of debris hitting the detectors, which he said revealed the hitherto unseen presence of the enigmatic particle. "That is what we are sure is the Higgs," a CERN scientist said.

LESS THAN ONE IN A MILLION

"It's a boson!" headlined Britain's Science and Technology Facilities Council in a statement on the role its researchers had played in the delivery of the "dramatic 5 sigma signal" for the existence of the long-sought particle.

Five sigma, a measure of probability reflecting a less than one in a million chance of a fluke in the data, is a widely accepted standard for scientists to agree the particle exists.

"The fact that both our teams have independently come to the same results is very powerful," Oliver Buchmueller, a senior physicist on one of the research teams, told Reuters.

"We know it is a new boson. But we still have to prove definitively that it is the one that Higgs predicted."

Al-Khalili said the researchers' caution was extreme: "Cutting through all the jargon about sigmas and decay channels, the bottom line is that CERN have indeed discovered the Higgs boson," he said. "In my view, if it looks like the Higgs, smells like the Higgs and is exactly what we expected from the Higgs, then it's the Higgs."

The Higgs theory explains how particles clumped together to form stars, planets and life itself. Without the Higgs boson, the universe would have remained a formless soup of particles shooting around at the speed of light, the theory goes.

It is the last undiscovered piece of the Standard Model that describes the fundamental make-up of the universe. The model is for physicists what the theory of evolution is for biologists.

What scientists do not yet know from the latest findings is whether the particle they have discovered is the Higgs boson as exactly described by the Standard Model. It could be a variant of the Higgs idea or an entirely new subatomic particle that could force a rethink on the fundamental structure of matter.

The last two possibilities are, in scientific terms, even more exciting.

Packed audiences of particle physicists, journalists, students and even politicians filled conference rooms in Geneva, London and a major physics conference in Melbourne, Australia, to hear the announcement.

Despite the excitement, physicists cautioned that there was still much to learn: "We have closed one chapter and opened another," said Peter Knight of Britain's Institute of Physics.

Paul Nurse, president of Britain's science academy The Royal Society, said: "This is a big day for science and for human achievement ... Today moves us a step closer to a fuller understanding of the very stuff of which the universe is made."

Higgs himself called it a great achievement for CERN's collider. Without it, his ideas would remain just a paper theory and he conceded that he personally was never cut out for laboratory experimentation: "I certainly did some lab work as a schoolboy in Bristol," he told Reuters. "I was incompetent."

(Additional reporting by Rosalba O'Brien in London and Sonali Paul in Melbourne; Writing by Alastair Macdonald)