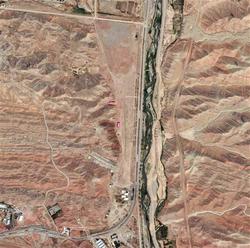 VIENNA (Reuters) - Iran has doubled the number of uranium enrichment centrifuges it has in an underground bunker, a U.N. report said on Thursday, showing Tehran has continued to expand its nuclear program despite Western pressure and the threat of an Israeli attack.

As Israeli politicians increased their talk of air strikes on Iran's nuclear sites in recent months, the Islamic Republic was rapidly increasing the enrichment capacity of its Fordow site, buried deep underground to withstand any such hit.

The U.N. International Atomic Energy Agency also said in its quarterly report on Iran that buildings had been demolished and earth removed at a military site the IAEA wants to inspect, in what Western diplomats see as a determined effort by Tehran to clean up any evidence of illicit nuclear-linked tests.

These "extensive activities" at the Parchin complex, the Vienna-based U.N. agency added, would significantly hamper its investigation there, if and when inspectors are allowed access.

The building, which the IAEA believes is housing a steel chamber for explosives tests, has now been "shrouded", the report said, in a possible attempt to hide it from satellite cameras.

In another apparent sign of stonewalling of the IAEA's inquiry, it said "no concrete results" had been achieved in a series of high-profile meetings with Iran this year aimed at allaying concern about its nuclear research.

"Iran's continued enrichment activities ... serve to taunt all those in the international community concerned by Iran's nuclear program," a senior Western diplomat said.

In Washington, the White House said the United States had made it clear to Iran that it has a limited window of time to stop its nuclear activity and diplomatic terms offered by the West would not remain open indefinitely.

"We are closely studying the details of the report, but broadly speaking it is not surprising that Iran is continuing to violate its obligations," Press Secretary Jay Carney said.

The IAEA said the number of centrifuges at Fordow, near the holy Shi'ite Muslim city of Qom, about 130 km (80 miles) from the capital Tehran, had more than doubled to 2,140 from 1,064 in May. The new machines were not yet operating, it said.

Iran's supreme leader repeated this week that Iran's nuclear program was entirely peaceful. "Our motto is nuclear energy for all and nuclear weapons for none," Ayatollah Ali Khamenei told a developing nations summit in Tehran.

But the expansion in enrichment infrastructure and the stockpiles of nuclear material revealed in the IAEA's report will do nothing to ease fears or reduce the diplomatic and sanctions pressure on Iran.

The report may strengthen a belief in Israel - which sees Iran's nuclear program as an existential threat - that the West's tougher economic sanctions against Tehran this year are failing to make the major oil producer curb its program.

"This report corroborates what (Israeli Prime Minister Benjamin) Netanyahu has been saying for years now," an Israeli official said, referring to his view that the diplomatic process had only given Iran more time to pursue its program.

Washington says there is still time for diplomatic pressure to work. It could be drawn into any Iran-Israeli conflict.

Cliff Kupchan, a Middle East analyst at consultancy Eurasia Group, said he did not think the IAEA's findings represented a "game changer" and he believed any U.S. president would attack if there was an obvious Iranian bid to build a nuclear bomb.

The IAEA said Iran had produced nearly 190 kg (418 pounds) of higher-grade enriched uranium since 2010, up from 145 kg in May, although a large part of that had been earmarked for conversion to reactor fuel. Refined uranium can have both civilian or military uses, depending on the enrichment level.

Iran says it needs the higher-grade material - which is much purer than fuel needed for electricity generation - for a medical research reactor, but it also takes it significantly closer to making potential bomb material.

Iran would need about 200-250 kg of uranium refined to 20 percent fissile concentration if it wanted to make one bomb, a decision it is not believed to have taken yet, experts say.

"Iran would not likely want to take the dramatic step of breaking out of the nuclear Nonproliferation Treaty (NPT) until it has enough material for several bombs — a point that it will not likely be able to reach for two years or more," said the Arms Control Association, a U.S. research and advocacy group.

The IAEA expressed deepening concerns about Parchin, a military site southeast of Tehran that it wants to inspect for evidence of past nuclear weapons development tests. "Significant ground scraping and landscaping have been undertaken over an extensive area at and around the location," it said.

Five buildings or other structures had been demolished and power lines, fences and paved roads removed, it said, activities that would hamper its investigation if granted access.

Iran says Parchin is a conventional military facility and has dismissed the allegations about it as "ridiculous".

(Additional reporting by Zahra Hosseinian in Zurich and Allyn Fisher-Ilan in Jerusalem; Editing by Myra MacDonald)