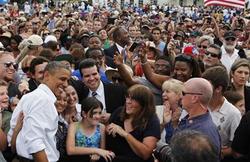 The latest daily tracking poll showed Obama, a Democrat, with a lead of 4 percentage points over Romney. Forty-seven percent of 1,457 likely voters surveyed online over the previous four days said they would vote for Obama if the November 6 elections were held today, compared with 43 percent for Romney.

"The bump is actually happening. I know there was some debate whether it would happen... but it's here," said Ipsos pollster Julia Clark, referring to the "bounce" in support that many presidential candidates enjoy after nominating conventions.

Obama had leapfrogged Romney in the daily tracking poll on Friday with a lead of 46 percent to 44 percent.

Obama's lead over Romney is comparable to Romney's former lead over the president after the Republican National Convention finished last week, Clark said.

"We don't have another convention now to turn our attention to, so (Obama's bounce) may maintain," Clark said. "How big it'll be and how long it will last remains to be seen."

Obama increased his lead over Romney in certain favorable characteristics. Asked who was more "eloquent," 50 percent of the 1,720 registered voters questioned in the poll favored Obama, compared to 25 percent for Romney. Asked about being "smart enough for the job," 46 percent sided with Obama compared to 37 percent for Romney.

In fact, Obama led Romney in a dozen such favorable characteristics, such as "represents America" or "has the right values." The only such category in which Romney had an advantage was being "a man of faith," as 44 percent picked Romney, who is Mormon, compared to 31 percent for Obama, who is Christian.

The Democratic National Convention itself received a rather muted response in the poll. Of those registered voters who had heard, seen or read at least something about it, 41 percent rated it as "average" and 29 percent as "good."

The Republican National Convention that wrapped up August 30 in Tampa, Florida similarly was rated "average" by 38 percent and "good" by 27 percent in Saturday's polling results.

(Editing by Will Dunham)