Bob Dylan says plagiarism charges made by "wussies and pussies" 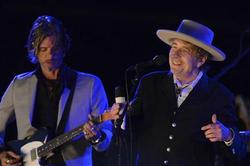 NEW YORK (Reuters) - Bob Dylan has angrily responded to charges he plagiarized some of his lyrics, calling critics "wussies and pussies" and saying musical appropriation is "part of the folk tradition."

In an interview with Rolling Stone magazine for its Friday edition, the influential singer-songwriter made his first public comments on the accusations, saying that in folk and jazz music "quotation is a rich and enriching tradition."

"Everyone else can do it but not me," he complained. "There are different rules for me."

Rolling Stone released excerpts of the interview on Wednesday and Reuters obtained a complete transcript.

In 2003, the Wall Street Journal reported that lyrics from Dylan's 2001 record "Love and Theft" were remarkably similar to phrases in an obscure 1995 biography of a Japanese mobster.

In 2006, the New York Times made similar claims about a Civil War era poet's phrasings and Dylan's 2006 record "Modern Times."

"I'm working within my art form," the 71 year-old singer told Rolling Stone. "It's that simple. ... It's called songwriting. It has to do with melody and rhythm, and then after that, anything goes. You make everything yours. We all do it."

"These are the same people that tried to pin the name Judas on me," Dylan added, referring to bitter 1960s folk fans who decried his move into electric guitar blues and famously compared the singer to the Biblical apostle who betrayed Jesus.

"Judas - the most hated name in human history!" he exclaimed. "If you think you've been called a bad name, try to work your way out from under that. Yeah, and for what? For playing an electric guitar? As if that is in some kind of way equitable to betraying our Lord and delivering him up to be crucified. All those evil ... can rot in hell," he said.

Musical appropriation - using familiar cultural references or language in a new context - is different from non-fiction writing or journalism, said Sean Wilentz, a Princeton University professor of American history who has written extensively about Dylan.

"Of course it's legitimate," Wilentz told Reuters on Wednesday of Dylan's use of others' material. "Dylan's frame of reference is so much larger than most songwriters' - more literary, historical and philosophical."

Wilentz said crediting bits and pieces of another's work is scholarly tradition, not an artistic tradition.

"Creating art is different, and always has been, especially the kind Dylan creates," he said.

Dylan, who released "Tempest," his 35th studio album this week, has been scrutinized throughout his 50-year career, at least in part because he has proven so unpredictable and defied convention at virtually every turn.

In 2006, he stunned fans when he appeared in a sensuous Victoria's Secret commercial. In 1990, he released an album made up largely of children's nursery rhymes. In the late 1970s, the Jewish-raised Dylan embraced Christianity and sang only religious-themed music for several years.

In a 50-year career, he has won 11 Grammys, an Academy Award, a Pulitzer Prize, the U.S. Presidential Medal of Freedom and numerous other awards.

"I'm not like you," he told the Rolling Stone interviewer at one point.