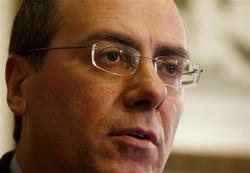 JERUSALEM (Reuters) - Any sign that Syria's grip on its chemical weapons is slipping as it battles an armed uprising could trigger Israeli military strikes, Israel's vice premier said on Sunday.

Silvan Shalom confirmed a media report that Prime Minister Benjamin Netanyahu had last week convened a meeting of security chiefs to discuss the civil war in Syria and the state of its suspected chemical arsenal.

Israel and NATO countries say Syria has stocks of chemical warfare agents at four sites. Syria is cagey about whether it has such arms but says if it had it would keep them secure and use them only to fend off foreign attack.

The Israeli meeting on Wednesday had not been publicly announced and was seen as unusual as it came while votes were being counted from Israel's parliamentary election the day before, which Netanyahu's party list won narrowly.

Such a development would be "a crossing of all red lines that would require a different approach, including even preventive operations," he said, alluding to military intervention for which Israeli generals have said plans have been readied.

"The concept, in principle, is that this (chemical weapons transfer) must not happen," Shalom said. "The moment we begin to understand that such a thing is liable to happen, we will have to make decisions."

Israeli media said on Sunday the military had deployed two "Iron Dome" rocket interceptor batteries near the northern city of Haifa, an area near the Lebanese and Syrian frontiers.

A military spokesman confirmed the report but insisted the battery placement was "not due to any specific security situation" but part of a routine of rotating these systems.

Addressing his cabinet on Sunday, Netanyahu said he intended to put together "the broadest and most stable government as possible in order, first of all, to meet the significant security threats that face the State of Israel".

Difficult coalition talks could be ahead for Netanyahu with factions representing widely different sectors of the Jewish state's population.

"In the east, north and south, everything is in ferment and we must be prepared, strong and determined in the face of all possible developments," Netanyahu said, in apparent reference to Iran, Syria and Egypt.

Raising the regional stakes, Iran, among Assad's few allies and itself long the subject of Israeli military threats over its nuclear program, said on Saturday it would deem any attack on Syria an attack on itself.

Interviewed on Army Radio, Civil Defence Minister Avi Dichter said Syria was on the verge of collapse. But asked whether Israel perceived an imminent threat, Dichter said: "No, not yet. I suppose that when things pose a danger to us, the State of Israel will know about it."

France, among the most vocal backers of Syria's rebels, said last week there were no signs Assad was about to be overthrown.

An Israeli government security adviser told Reuters on Sunday Syria had taken new prominence in strategic planning "because of the imminence of the threat. There the WMDs (weapons of mass destruction) are ready and could be turned against us at short notice."

Syria is widely believed to have built up the arsenal to offset Israel's reputed nuclear weapons, among other reasons.