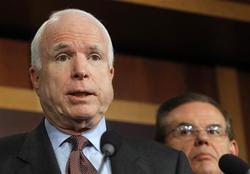 WASHINGTON (Reuters) - Senator John McCain on Tuesday predicted that efforts to craft a wide-ranging, bipartisan immigration reform bill would come together promptly in the Senate, which could eliminate the need for President Barack Obama to propose his own measure.

The Arizona Republican lawmaker, who is one of the negotiators on a bipartisan measure, emerged from a meeting with President Barack Obama upbeat about prospects in Congress.

"We are committed to trying to get the issue resolved as quickly as possible and I think we will ... in a reasonable time frame," McCain told reporters after returning to Capitol Hill.

Obama has warned that if immigration reform efforts faltered in Congress, he would put forth a legislative proposal.

A group of eight Senate Democrats and Republicans, including McCain, floated the outlines of a broad immigration bill recently. The measure aims to set firm targets for determining whether the southwestern U.S. border with Mexico is secure enough to begin putting some of the 11 million undocumented people living in the United States on a path to citizenship.

The group hopes to finish writing the details of a bill next month so the full Senate can debate such a measure by June or July.

McCain, asked whether he was confident that Obama would support efforts in Congress, responded: "I believe that the president is very committed to comprehensive immigration reform," even though his support might not extend to every element senators are drafting.

On immigration reform, there has been tension between Obama and Republicans in Congress over border security issues, with the Democratic president sometimes hinting that enough progress has been made that it is now time to move forward on the controversial pathway to citizenship for certain illegal residents.

McCain raised the issue with Obama on Tuesday and said he was "more confident" that the president understands the border problems in Arizona.

Some border areas of Arizona are still seen as a porous route for illegal entries into the United States. Members of Congress from that area want to see tougher controls included in the reform legislation before moving ahead with it.

Another Republican senator working with McCain, Lindsey Graham of South Carolina, also attended the White House meeting. He told reporters, "I think the president is very sincere, wanting a bill and wants to know what he can do to help."