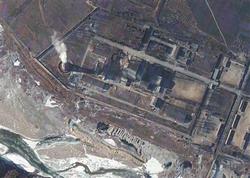 SEOUL (Reuters) - North Korea said on Tuesday it would revive a mothballed nuclear reactor able to produce bomb-grade plutonium but stressed it was seeking a deterrent capacity and did not repeat recent threats to attack South Korea and the United States.

United Nations Secretary-General Ban Ki-moon said the crisis over North Korea had gone too far and he appealed for dialogue and negotiation to resolve the situation.

"Nuclear threats are not a game. Aggressive rhetoric and military posturing only result in counter-actions, and fuel fear and instability," Ban, a South Korean, told a news conference during a visit to Andorra.

The Pentagon, meanwhile, said another U.S. guided-missile destroyer had taken position in the western Pacific to assist with missile defense, as tensions rise over North Korea's threats against the United States and its ally, South Korea.

The crisis flared after Pyongyang was hit with U.S. sanctions for conducting a third nuclear test in February and the United States and South Korea staged military drills that North Korea viewed as "hostile."

Pyongyang then threatened a nuclear strike on the United States, missile strikes on its Pacific bases and war with South Korea, prompting Washington to bolster forces in the region.

The state-owned KCNA news agency announced on Tuesday that North Korea would relaunch all nuclear facilities for both electricity and military uses.

One of the most isolated and unpredictable states in the world, North Korea carried out its third nuclear test since 2006 but is seen as some years away from producing a deliverable nuclear weapon, although it claims to have a deterrent.

A speech by the North's young leader, Kim Jong-un, given on Sunday but published in full by KCNA on Tuesday, appeared to dampen any prospect of a direct confrontation with the United States by emphasizing that nuclear weapons would ensure the country's safety as a deterrent.

"Our nuclear strength is a reliable war deterrent and a guarantee to protect our sovereignty," Kim said. "It is on the basis of a strong nuclear strength that peace and prosperity can exist and so can the happiness of people's lives."

"What Kim Jong-un has been choosing to do is provocative, it is dangerous, reckless and the United States will not accept (North Korea) as a nuclear state," Kerry said.

The Obama administration's deployment of advanced aircraft and warships to South Korea was a signal "that the United States will defend our allies and that we will not be subject to irrational or reckless provocation," he said.

Kerry, who will visit South Korea next week, reminded the North Koreans that "they have an option, and that option is to enter into negotiations for denuclearization ... and to begin to focus on the needs of their people."

Kim's speech, delivered to the central committee meeting of the ruling Workers Party of Korea, hinted at a small shift away from threats against Seoul and Washington, but it remained some distance from calling any kind of end to the crisis.

"The fact that this (speech) was made at the party central committee meeting, which is the highest policy-setting organ, indicates an attempt to highlight economic problems and shift the focus from security to the economy," said Yang Moo-jin of the University of North Korean Studies in Seoul.

But if Pyongyang indeed restarts the nuclear facilities, it would have longer-term implications for the region's security.

Reactivating the aged Soviet-era reactor at the Yongbyon nuclear plant would yield plutonium, a tested path to stockpile more fissile material than a uranium enrichment program.

The White House criticized the move. "North Korea's announcement that it will reopen or restart its nuclear facilities at Yongbyon is another indication of its pattern of contradicting its own commitments and its pattern of violating its international obligations," spokesman Jay Carney said.

The United States is urging Russia and China to do more to rein in North Korea, Carney said.

It was unclear how quickly Yongbyon, whose cooling tower was destroyed as part of an earlier denuclearization deal with major powers, would take to restart.

It was also impossible to verify whether Yongbyon remained connected to North Korea's antiquated electricity grid at all.

"It was a reactor that was nearing obsolescence with a cooling tower that wasn't functioning properly when it was blown up. It could mean they've been rebuilding quite a few things," said Yoo Ho-yeol, North Korea specialist at Korea University in Seoul.

The move to restart the reactor undermines China's stated aim of restarting denuclearization talks on the Korean peninsula, prompting a foreign ministry spokesman in Beijing to express regret at the decision.

As well as reviving the 5MW reactor at Yongbyon, the North's only known source of plutonium for its nuclear arms program, KCNA said a uranium enrichment plant would also be put back into operation.

The nuclear plant's output would be used to solve what KCNA termed an "acute shortage of electricity" and to bolster "the nuclear armed force."

The United States has bolstered forces staging joint drills with South Korea with Stealth fighters and made bomber overflights in a rare show of strength to Pyongyang.

Washington has said it has seen no evidence of hostile North Korean troop movements. Much of the North Korean rhetoric in recent weeks has echoed previous bouts of anger, but the length and intensity has been new, raising concerns that the tensions could spiral into actual fighting.

U.S. defense officials said on Monday that the USS John McCain, an Aegis-class guided-missile destroyer used for ballistic missile defense, was being put into position to operate off the Korean peninsula.

At the Pentagon, spokesman George Little said on Tuesday the McCain had arrived at a "pre-determined location" in the western Pacific. He added that another destroyer, the USS Decatur, had also taken position in the western Pacific "to perform a missile defense mission as assigned by our combatant commander."

Little declined to further specify the location of either ship.

He denied reports that a floating, X-band radar used to track an adversary's missiles as part of a missile defense system was being deployed to the waters off Japan. No decisions had been made about what would be done with the radar once at-sea testing in the region was finished, Little said.

In Pyongyang, the party congress meeting and a subsequent assembly of the country's rubber-stamp parliament repeated the usual anti-American rhetoric and criticized South Korea, but the broad mood appeared to have changed.

The pariah state has once again started emphasizing economic development as it shifts to the major April 15 celebration of the birth of its founder, Kim Il Sung, grandfather of the current ruler.

For the young Kim, it appears that cementing control of the party and state has now taken top priority as well as improving living standards in a country whose economy is smaller than it was 20 years ago, according to external assessments.

Kim appointed a handful of personal confidants to the party's politburo, further consolidating his grip on power in the second full year of his reign.

Former premier Pak Pong-ju, a key ally of the leadership dynasty, was re-appointed to the post from which he was fired in 2007 for failing to implement economic reforms.

Pak, believed to be in his 70s, is viewed as a key confidant of Jang Song-thaek, the young Kim's uncle and also a protégé of Kim's aunt. Pak is also seen as a pawn in a power game that has seen Jang and his wife reassert control over military leaders.