More than 1,000 killed in Iraq violence in May 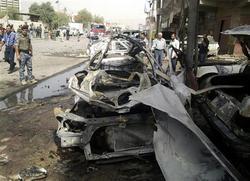 BAGHDAD (Reuters) - More than 1,000 people were killed in violence in Iraq in May, making it the deadliest month since the sectarian slaughter of 2006-07, the United Nations said on Saturday, as fears mounted of a return to civil war.

Nearly 2,000 people have been killed in the last two months as al Qaeda and Sunni Islamist insurgents, invigorated by the Sunni-led revolt in Syria and by Sunni discontent at home, seek to revive the kind of all-out inter-communal conflict that killed tens of thousands five years ago.

"That is a sad record," Martin Kobler, the U.N. envoy in Baghdad, said in a statement. "Iraqi political leaders must act immediately to stop this intolerable bloodshed."

The renewed bloodletting reflects worsening tensions between Iraq's Shi'ite-led government and the Sunni minority, seething with resentment at their treatment since Saddam Hussein was overthrown by the U.S.-led invasion of 2003 and later hanged.

Shi'ite Prime Minister Nuri al-Maliki on Saturday met leaders from across Iraq's sectarian divide to try to resolve the crisis. Leaders emerged smiling, but there were only initial talks that did not address fundamental Sunni discontent.

This week multiple bombings battered Shi'ite and Sunni areas of the capital Baghdad, killing nearly 100 people. Most of the 1,045 people killed in May were civilians, U.N. figures showed.

The U.N. toll is higher than a Reuters estimate of 600 deaths based on police and hospital officials. Such counts can vary depending on sourcing, while numbers often increase beyond initial estimates as wounded people die.

Al Qaeda's local wing and other Sunni armed groups are now regaining ground lost during their battle with U.S. troops who pulled out in December 2011.

At the height of Iraq's sectarian violence, when Baghdad was carved up between Sunni and Shi'ite gunmen who preyed on rival communities, the monthly death count sometimes topped 3,000.

Security officials believe Shi'ite militias such as the Mehdi Army, Asaib al-Haq and Kataeb Hizballah have mostly kept out of the fray. But militia commanders say they are prepared to act.

Iraq's defense ministry on Saturday said it had captured an al Qaeda cell that was preparing to manufacture poison gases to attack Iraqi security forces but also to ship overseas for assaults in Europe and the United States.

Since April, bombings and attacks have targeted Shi'ite and Sunni mosques and neighborhoods in Baghdad and other cities, as well as security forces and even moderate Sunni leaders.

Many Iraqis, especially in Baghdad, fear a return of death squads and revenge killings, with shops closing early and extra security measures in place.

"Shi'ite militant groups have largely stayed out of recent violence. If they are behind bombings of Sunni mosques, that suggests that they are being drawn into conflict," said Stephen Wicken, at the Institute for the Study of War in Washington.

"That would set the conditions up for a slide into broader sectarian conflict."

Syria's war, where mostly Sunni rebels are trying to topple President Bashar al-Assad, has further frayed ties between Iraq's Shi'ites and Sunnis. Iraqi fighters from both sects are crossing the border to fight for opposite sides in Syria.

Iraqi Shi'ite officials fear an Sunni Islamist take-over in Syria if Assad, whose Alawite sect is rooted in Shi'ite Islam, falls. Such fears reflect a broader regional rivalry between Shi'ite, non-Arab Iran and Sunni states such as Saudi Arabia.

Maliki has often upset his Sunni and ethnic Kurdish partners involved in a delicate power-sharing deal.

Soon after U.S. troops left, Iraqi authorities arrested the bodyguards of Maliki's Sunni vice-president and a year later those of the Sunni finance minister. The arrests were officially linked to terrorism cases, but they aggravated Sunni fears.

Since December, thousands of Sunnis have protested against the government in Sunni-dominated provinces such as Anbar.

An Iraqi army raid on a Sunni protest camp in the town of Hawija in April reignited violence that killed more than 700 people in that month, by a U.N. count. That had been the highest monthly toll in almost five years until it was exceeded in May.