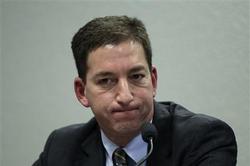 BRASILIA (Reuters) - Glenn Greenwald, the American journalist who published documents leaked by fugitive former U.S. intelligence contractor Edward Snowden, plans to make new revelations "within the next 10 days or so" on secret U.S. surveillance of the Internet.

"The articles we have published so far are a very small part of the revelations that ought to be published," Greenwald on Tuesday told a Brazilian congressional hearing that is investigating the U.S. internet surveillance in Brazil.

"There will certainly be many more revelations on spying by the U.S. government and how they are invading the communications of Brasil and Latin America," he said in Portuguese.

The Rio de Janeiro-based columnist for Britain's Guardian newspaper said he has recruited the help of experts to understand some of the 15,000 to 20,000 classified documents from the National Security Agency that Snowden passed him, some of which are "very long and complex and take time to read."

Greenwald told Reuters he does not believe the pro-transparency website WikiLeaks had obtained a package of documents from Snowden, and that only he and filmmaker Laura Poitras have complete archives of the leaked material.

Greenwald said Snowden, who was in hiding in Hong Kong before flying to Russia in late June, was happy to leave a Moscow airport after being granted temporary asylum, and pleased that he had stirred up a worldwide debate on internet privacy and secret U.S. surveillance programs used to monitor emails.

"I speak with him a lot since he left the airport, almost every day. We use very strong encryption to communicate," Greenwald told the Brazilian legislators. "He is very well."

"He is very pleased with the debate that is arising in many countries around the world on internet privacy and U.S. spying. It is exactly the debate he wanted to inform," Greenwald said.

After a meeting in June with Snowden in Hong Kong, Greenwald published in The Guardian the first of many reports that rattled the U.S. intelligence community by disclosing the breadth and depth of alleged NSA surveillance of telephone and internet usage.

Last month, in an article co-authored by Greenwald, the Brazilian newspaper O Globo reported that the NSA spied on Latin American countries with programs that can monitor billions of emails and phone calls for suspicious activity. Latin American countries fumed at what they considered a violation of their sovereignty and demanded explanations and an apology.

Members of the Senate Foreign Relations Committee peppered Greenwald with questions on Tuesday, such as whether the NSA was capable of spying on Brazil's commercial secrets, including the discovery of promising offshore oil reserves, and the communications of the country's president and armed forces.

Greenwald had no details on specific targets and said the documents did not name telecommunications and internet companies in the United States and Brazil that might have collaborated with the NSA's collection of internet users' data.

The journalist said Snowden planned to stay in Moscow "as long as he needs to, until he can secure his situation." He said Snowden knew he ran the risk of spending the rest of his life in jail or being hunted by the most powerful nation in the world, but had no doubts about his decision to leak the documents on the U.S. surveillance programs.

Greenwald criticized governments around the world for failing to offer Snowden protection, even while they publicly denounced the U.S. surveillance of their citizens' internet usage.

Meanwhile, Washington is working through diplomatic channels to persuade governments to stop complaining about the surveillance programs, he said.

"The Brazilian government is showing much more anger in public than it is showing in private discussions with the U.S. government," Greenwald told reporters. "All governments are doing this, even in Europe."

In a speech at the United Nations on Tuesday, Brazilian Foreign Minister Antonio Patriota called the interception of telecommunications and acts of espionage in Latin America "a serious issue, with a profound impact on the international order." But he did not mention the United States by name.