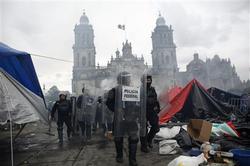 MEXICO CITY (Reuters) - Police used tear gas and water cannon to disperse demonstrators in the main square of Mexico City on Friday, arresting 31 people, as the government took control of the historic center after weeks of protests by teachers.

Federal police clashed with some protestors as they cleared the massive square, or Zocalo, for celebrations on Sunday, when President Enrique Pena Nieto is due to lead his first traditional remembrance of the heroes of Mexican independence.

Teachers have been camped out on the square in protest of a new education reform designed to impose tougher teaching standards, and strip educators of some privileges such as the right to pass on their jobs to their children.

The Interior Ministry said none of the people arrested were teachers but did not identify who they were. Mexican media said about a dozen police were slightly injured.

The teachers' protests have presented one of the first major challenges to Pena Nieto's authority, and they have provided a focal point for some militant leftists opposing his government.

Pena Nieto took office in December, pledging to revive the Mexican economy with a series of reforms. The education reform, which had broad political backing, was the first of those major bills to be signed into law earlier this month.

Mexico began its armed uprising for independence from Spain in 1810, and it was granted in 1821.