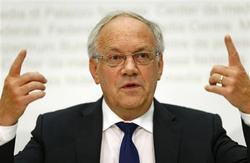 BERN (Reuters) - The Swiss government urged voters on Friday to reject a proposal to limit monthly executive pay to no more than what the company's lowest-paid staff earn in a year, saying it could hurt the attractiveness of Switzerland as a business destination.

As anger at multi-million dollar payouts for executives has spread around the globe since the financial crisis, Swiss voters forged ahead in March by backing some of the world's strictest controls on executive pay, forcing public companies to give shareholders a binding vote on compensation.

"I was always against excessive pay but we are on a path back to more sensible practices and I don't want with this initiative now to throw out the baby with the bathwater," Economy Minister Johann Schneider-Ammann, a businessman-turned-politician, told journalists in Bern.

The Swiss direct democracy system, including four national referendums a year, means public ire can be translated into strong action.

In a poll conducted earlier this month by Swiss public opinion and market research institute Isopublic and commissioned by the Sonntagszeitung, 35.5 percent of respondents said they would vote in favor of 1:12 and 37.7 percent said they would vote against it. The remainder were unsure.

Representatives of the 1:12 initiative could not immediately be reached by Reuters for comment.

Schneider-Ammann said Switzerland would miss out on lost taxes if voters backed the initiative and companies that faced becoming less competitive as a result of the new pay rules would view Switzerland more critically.

"Companies will ask what kind of Switzerland they have in front of them," Schneider-Ammann said. "We will weaken Switzerland as a location if flagship firms - those already here and those we would like to have in this country - don't invest here any more."

In May, Glencore Xstrata Chief Executive Ivan Glasenberg, who paid 360 million Swiss francs in taxes in the canton of Zurich in 2011, told Swiss Sunday newspaper Sonntagszeitung the initiative would be a catastrophe for the firm and could force the commodities trader to leave Switzerland.