U.S. budget deal could usher in new era of cooperation 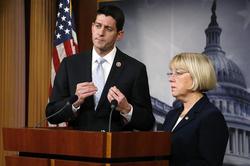 By Richard Cowan and David Lawder

WASHINGTON (Reuters) - A bipartisan budget deal announced in the U.S. Congress on Tuesday, though modest in its spending cuts, would end three years of impasse and fiscal instability in Washington that culminated in October with a partial government shutdown.

While praised by the Republican leadership of the U.S. House of Representatives, including Speaker John Boehner and Majority Leader Eric Cantor, the agreement faces a challenge from some House conservatives and will require support of the minority Democrats to pass.

The backing of President Barack Obama, who also hailed the agreement as "a good first step," should help round up votes of his fellow Democrats. He urged Congress to quickly pass it.

Obama and most congressional leaders long ago abandoned talk of larger but increasingly elusive "grand bargains" that would significantly slash the nation's deficit.

Democratic Senator Patty Murray and Republican Representative Paul Ryan, who appeared before reporters Tuesday evening to announce the $85 billion budget accord, portrayed it as the beginning of a new era.

"For far too long compromise has been considered a dirty word," said Murray, chairwoman of the Senate Budget Committee, adding that the uncertainty created by three solid years of Washington bickering "was devastating to our economic recovery."

Ryan, the Republican Party's 2012 failed vice presidential candidate who has his eye on either a 2016 presidential campaign or potentially a House leadership post, wasted no time in trying to blunt criticism of the pact, especially from fellow conservatives.

"In divided government, you don't always get what you want," said Ryan, chairman of the House Budget Committee

Over the last two days, conservative groups, including Americans for Prosperity and Heritage Action for America, blasted the deal as it was being negotiated and called on Republicans to reject it.

Such groups hold sway with some House Republicans, and with the 2014 congressional elections coming into focus their opposition could complicate its passage.

The Ryan-Murray plan would blunt the effect of automatic "sequester" spending cuts by allowing federal agencies and discretionary programs to spend $63 billion more over two years, while savings are made elsewhere. It also would provide an additional $20 billion to $23 billion in deficit reduction over 10 years.

While the measure could improve Congress' ability to pass must-do bills to keep the government running, many saw this as marking an end to any chance of Washington enacting a major new deficit-reduction law anytime soon.

Republican Senator Marco Rubio, who could compete against Ryan in a 2016 White House bid, blasted the deal, saying, "This budget continues Washington's irresponsible budgeting decisions by spending more money than the government takes in and placing additional financial burdens on everyday Americans."

The accord was uncharacteristic for a politically polarized Congress that in recent years has waited until the absolute last moments to reach stop-gap agreements on the budget and on raising U.S. borrowing limits to avert historic debt defaults.

Instead, Ryan and Murray came to a handshake before a non-binding Friday deadline and more than a month before the January 15 date when existing funds to run many federal programs expire.

Their work was made easier by the simple fact that they avoided most of their parties' biggest disagreements in budget debates: the future of big retirement and healthcare programs that Republicans want to cut and the closing of tax loopholes that benefit the rich, which Democrats want to attack.

The House is likely to put the deal to a vote by Friday, before recessing for the year, and a Senate vote might come next week.

Boehner, who as the House speaker was at the center of bitter budget fights with Obama in 2011, 2012 and 2013, said: "While modest in scale, this agreement represents a positive step forward" that, he added, would further cut budget deficits without tax hikes.

While it included no tax increases in a strict sense, the Murray-Ryan proposal would cost consumers some money, as in higher airport security fees that would be included in airplane ticket purchases.

These and other new savings would replace some of the second round of automatic spending cuts, known as "sequestration," that were scheduled to begin in January.

Murray and other leading Democrats have been pushing for an extension of federal jobless benefits that expire later this month during weeks of budget negotiations.

She told reporters that such a provision is not part of the agreement but is being discussed by congressional leaders.

Also not addressed in this budget deal is the need to again raise U.S. borrowing authority sometime next year.

The reaction from at least one market-watcher was positive. "It is certainly a good start to what would be welcomed relief from the fiscal dysfunction that has defined Washington," said Craig Dismuke, chief economic strategist at Vining Sparks in Memphis.