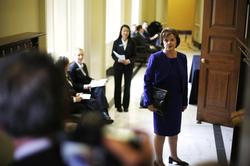 GENEVA (Reuters) - A United Nations human rights watchdog called on the United States on Thursday to release a report on a Bush-era interrogation program at the heart of a dispute between the CIA and a Senate panel.

Critics, including experts on the U.N. civil and political rights panel, say the CIA program set up after the September 11, 2001 attacks on the United States included harsh interrogation methods that constituted torture banned by international law.

The U.N. Human Rights Committee began a two-day examination of the U.S. record on Thursday, its first scrutiny since 2006, attended by nearly 80 activist groups.

"It would appear that a Senator Dianne Feinstein claims that the computers of the Senate have been hacked into in the context of this investigation," Victor Manuel Rodriguez-Rescia, a committee member from Costa Rica, told the U.S. delegation.

"In the light of this, we would like hear a commitment that this report will be disclosed, will be made public and therefore be de-classified so that we the committee can really analyze what follow-up you have given to these hearings."

Senate Intelligence Committee chair Dianne Feinstein said on Monday the CIA may have broken the law by spying on Congress, searching computers used by staffers researching operations including the use of simulated drowning or waterboarding.

CIA Director John Brennan denied the agency had engaged in such spying activities on the Senate committee.

A key issue is how the Senate committee acquired what Feinstein and others describe as the CIA's own internal review of its interrogation tactics and secret prisons, and its use of "rendition", a practice by which prisoners are transferred between countries without formal judicial process.

Activists welcomed the watchdog's efforts to shine a light on what they say was an illegal program under President George W. Bush that included water-boarding. The Obama administration has disowned and condemned such methods.

"There is no reason to keep the program secret other than to protect people involved in illegal conduct," Andrea Prasow of Human Rights Watch told Reuters after the session.

compliance with a landmark international treaty on civil and political rights ratified by the United States.

Members grilled the U.S. delegation on a range of issues and urged Washington to reverse its view that the pact does not apply to U.S. facilities or officials holding suspects abroad in the context of the U.S.-led "war on terror", including at Guantanamo Bay.

They voiced deep concerns about allegations of police brutality, racial discrimination and profiling, the death penalty, access for undocumented migrants to health care and civilian casualties caused by U.S. drones in the Middle East.

"We have taken many steps to prevent torture, cruel and degrading punishment in connection with our activities outside of the United States," said Mary McLeod, principal deputy legal adviser at the State Department, who leads the U.S. delegation.

Under U.S. law, all U.S. officials are banned from using torture and the government conducts prompt and independent investigations into allegations of mistreatment, she said.

Committee chair Nigel Rodley, a British law professor and former U.N. investigator on torture, suggested lawyers in the Bush administration who drew up memorandums justifying the use of harsh interrogation techniques could also be liable.

"When evidently seriously flawed legal opinions are issued which then are used as a cover for the committing of serious crimes, one wonders at what point the authors of such opinions may themselves have to be considered part of the criminal plan in the first place?" Rodley said.

"Of course we know that so far there has been impunity."