Obama to business: tell your lawmakers to renew Ex-Im Bank 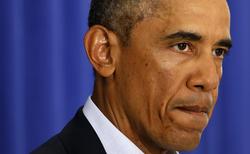 WASHINGTON (Reuters) - President Barack Obama on Saturday urged business owners to press Congress to reauthorize the U.S. Export-Import Bank, which could halt any new financing Sept. 30 - as some conservative Republicans hope it will - if lawmakers fail to act.

The little-known institution provides loans to buyers of U.S. products abroad. Obama said in his weekly radio address that if Congress lets the bank close, it would be stunting U.S. export growth and impeding economic expansion.

"If Congress fails to act, thousands of businesses, large and small, that sell their products abroad will take a completely unnecessary hit," the president said.

While playing a relatively small role in the U.S. export universe, the bank has become a political flashpoint. Conservative Republicans single it out as an unnecessary and potentially risky government program, while moderates and most Democrats defend it as providing a useful boost to businesses seeking new markets.

Hensarling, in a statement on Saturday, said the Ex-Im Bank amounted to "foreign corporate welfare" that benefited mostly "a handful of powerful politically connected corporations."

"What would really help American manufacturers and small businesses compete on a level playing field are pro-growth tax, energy, regulatory and liability policies that the House has already passed but are being blocked by Democrats in the Senate," he said.

"If left to do business as usual, the Bank has proven that it will continue to help all foreign airlines indiscriminately, including well-funded and state-supported ones that competitively threaten U.S. airlines and their employees," Delta Senior Vice President Andrea Fischer Newman wrote to Hensarling this week.

The airline wants a ban on Ex-Im Bank backing for deals to buy wide-body aircraft, such as Boeing's 747s. Boeing says that without Ex-Im Bank financing, airlines around the world would buy Airbus planes, usually with French or German export credit subsidies.

"The U.S. aerospace industry would lose sales and market share, and the jobs associated with that lost business would end up in Europe," Boeing senior vice president Tim Keating wrote to Hensarling last week.

The bank's supporters hope that Congress will temporarily renew the bank's charter in a stopgap government funding bill that must pass before Sept. 30. That would leave lawmakers more time to craft legislation that would provide a longer charter extension but contain reforms to the bank that would mollify critics.

Paul Ryan, the Republican vice presidential candidate in 2012 and skeptic about the bank, said this week he thinks the bank's charter will be kept alive with a temporary extension.