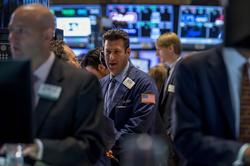 NEW YORK (Reuters) - The dollar rose to its highest this year against the yen on Tuesday on strong U.S. manufacturing and construction data, while the euro slipped to a 12-month low on speculation the European Central Bank will move toward looser monetary policy.

U.S. oil prices fell more than $3 a barrel, leading shares in the energy sector to account for almost half the decline in the S&P 500. Volume was light and the S&P closed slightly lower.

The data lifted the dollar almost 0.8 percent against the Japanese yen, pushing it above the 105 yen mark for the first time since the first week of this year. The dollar last traded at 105.10 yen, up 0.72 percent on the day.

The euro EUR= sagged in early trade on bets ECB President Mario Draghi will do more to help a wobbly euro zone economy. But the currency later recouped its losses, up 0.01 percent at $1.3128.

Investors are waiting to see what Draghi does when ECB policymakers meet on Thursday, said Ken Polcari, director of the NYSE floor division at O'Neil Securities in New York.

"If (the market) becomes disappointed on Thursday because Draghi does not announce something more accommodative or stimulative, then you'll see European markets under pressure and flow over into the U.S. markets, at least temporarily," he said.

Few investors expect immediate, major steps but most see looser ECB policy in the future as the euro zone fails to grow due to austerity measures and conflict in Ukraine.

Wall Street closed mixed after a choppy trading session in which the economic data failed to drive prices much.

"The market is probably pricing in stronger numbers on the economic side but it's still very much positive," said James Liu, global market strategist at JPMorgan Funds, in Chicago.

"We are expecting to see stronger economic numbers, the market is certainly expecting that, and as long we get them we can do quite well above 2,000 on the S&P 500," Liu said.

Brent crude fell almost to $100 a barrel, pressured by worries about slowing oil demand growth in China and Europe, a strong U.S. dollar and ample supplies.