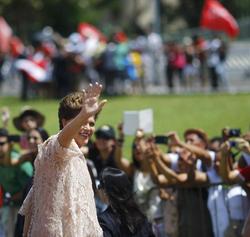 By Alonso Soto and Silvio Cascione

As she took the oath of office in Brasilia, Rousseff also promised to embark on an anti-corruption crusade in response to a multibillion-dollar graft scandal engulfing state-run oil company Petrobras (PETR4.SA: Quote, Profile, Research, Stock Buzz) that threatens to haunt her second term.

With investors fleeing Brazilian assets in disapproval of her management of the economy during her first term, and with a downgrade of the country's debt hinted by at least one ratings agency, Rousseff, a 67-year-old leftist, pledged to pursue more market-friendly policies.

"More than anybody, I know Brazil needs to resume growth. The first steps of this journey are an overhaul of public accounts, increasing domestic savings, beefing up investments and improving productivity," Rousseff said in her inaugural address to Congress.

Rousseff didn't provide specifics on the budget cuts, though she did promise to undertake the belt-tightening in a way that minimizes the pain for average Brazilians who rely on the government for social welfare benefits.

A career bureaucrat who had never run for public office before becoming the first woman to ascend to Brazil's presidency in 2011, Rousseff spent the last four years juggling an economic downturn and high inflation. She was narrowly re-elected in October after a divisive campaign that touted her record at reducing poverty and keeping unemployment near all-time lows.

To spearhead the change in economic policy, Rousseff previously named banker Joaquim Levy as finance minister. An orthodox economist who holds a doctorate from the University of Chicago, Levy is expected to enact budget cuts and other austerity measures to rebalance public accounts.

Those cuts, however, are likely to complicate what is expected to be another tough year for Brazil's economy, given sluggish growth worldwide and a domestic marketplace increasingly accustomed to government largesse.

"It's going to be a very rough year for her," said former Congressman Alfredo Sirkis, a longtime critic to the left of Rousseff, citing an "explosive combination" of problems.

Things will become even more complicated for Rousseff in February when the Supreme Court is expected to reveal the names of dozens of politicians who allegedly received funds from more than $3 billion in kickbacks skimmed from the coffers of Petroleo Brasileiro SA, as Petrobras is formally known.

So far 39 people have been arrested in the scandal, including two former Petrobras directors and scores of executives from Brazil's top construction companies. The construction executives are charged with channeling money from overpriced contracts to bribe officials and politicians.

Rousseff, who was chairwoman of Petrobras when much of the graft took place, has denied knowledge of the corruption.

On Thursday, she pledged to send Congress an anti-corruption bill in the first half of the year and engage legislators in what she described as a "national pact against corruption." She also vowed to stamp out the graft at Petrobras to defend the company from "internal predators and external enemies."

"We have to create mechanisms so that this never happens again," Rousseff said.

Eduardo Cunha, one of her most outspoken critics and a Congressman from the notoriously demanding allies of the PMDB party, is expected to become speaker of the Lower House. Cunha has said he will convene a new Congressional committee to probe the Petrobras scandal, which could slow the president's legislative agenda.