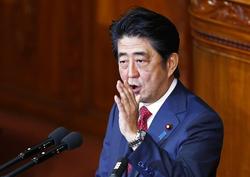 By Elaine Lies and Takashi Umekawa

TOKYO (Reuters) - A former adviser to Prime Minister Shinzo Abe has praised apartheid as a model for how Japan could expand immigration, prompting the government's top spokesman on Friday to emphasize that Japan's immigration policy was based on equality.

Author Ayako Sono, considered part of Abe's informal brain trust, set off a wave of online fury this week when she wrote in the conservative Sankei newspaper that South Africa's former policies of racial separation had been good for whites, Asians and Africans.

Her comments could complicate Abe's efforts to address a deepening labor shortage and his efforts to burnish the country's image abroad, analysts say.

In a column entitled "Let Them In - But Keep a Distance", Sono said Japan should open its doors to more foreign workers, especially to care for the growing numbers of elderly, but should make them live separately from Japanese.

"People can carry out business and research together, and socialize together, but they should live apart," she wrote.

Chief Cabinet Secretary Yoshihide Suga declined to comment on Sono's remarks at a regular news conference, but added, "Our immigration policy is predicated on equality, which is guaranteed in Japan."

A labor shortage has pushed the government to take steps to boost the numbers of highly skilled foreigners and expand a "trainee" program for blue collar workers that has been widely criticized for human rights abuses, but authorities insist the steps are not part of an "immigration policy".

Political analysts said her comments could well damage Japan at a time when Tokyo is ramping up its efforts to burnish the country's image overseas.

"There's a trend for people close to Abe and his way of thinking to emphasize the concept of 'Japaneseness' too much, and this could well lead to wariness on the part of people overseas," said well-known Japanese author Atsuo Ito, whose works include the "The Mathematics of Politics".

"The atmosphere in which Ms. Sono can make these remarks came about when Abe took power."

Sono's comments prompted widespread outrage on social media, with some saying they were especially offensive given that Tokyo is set to host the 2020 Summer Olympics.

Sono has landed in trouble for her remarks in the past, including a August 2013 magazine article - written during her tenure as an Abe adviser - criticizing women who went back to work after giving birth.