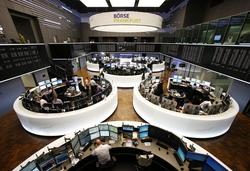 The Nasdaq was the weakest of the three major U.S. indexes on Friday, weighed down by Apple Inc (AAPL.O: Quote, Profile, Research, Stock Buzz) as some investors took profits ahead of its March 9 product unveiling.

U.S. gross domestic product expanded 2.2 percent in the fourth quarter, revised down from 2.6 percent estimated last month, the Commerce Department said. The number barely beat economists' forecasts of 2.1 percent growth but slowed from a 5 percent rate in the third quarter.

However, pending home sales rose to their highest level in 1-1/2 years in January and the University of Michigan's final February reading on U.S. consumer sentiment slipped from an 11-year high but topped expectations.

"The numbers weren't bad but weren't great," said Kim Forrest, senior equity research analyst at Fort Pitt Capital Group in Pittsburgh. "We've been hearing 1 million jobs have been created in the last 3 months, so where are people spending this money?"

Investors in Europe have bought more higher-yielding assets, such as equities, as yields on core European government bonds have tumbled into or close to negative territory ahead of the ahead of the European Central Bank's quantitative easing.

The FTSEurofirst 300 index of top European shares .FTEU3 closed up 0.38 percent after reaching its highest level since November, 2007. It has surged over 14 percent this year, its strongest start since benchmarks were created in 1986.

The ECB is expected to give details at its meeting next week on its Jan. 22 decision to embark on a securities-buying program to fend off deflation and revive Europe's economy.

The dollar index .DXY was down slightly late on Friday, although February brought its eighth straight month of gains against a basket of major currencies. It was its longest streak of monthly gains since the currency's link to gold was dropped in 1971.

The U.S. Treasuries market was poised for its worst month in more than 1-1/2 years as investors scaled back their safe-haven bond holdings on improving U.S. economic data and bets the Federal Reserve will raise interest rates this year.

"Growth isn't spectacular, but it's still very robust, and this completely and conclusively will support a Fed reaching normalization," said Edward Acton, Treasury strategist at RBS Securities in Stamford, Connecticut.